The NFL Mixes Up Patriotism And Protesting When They Are Actually The Same Thing
currently
CurrentlySwoonLifestyleHealth & WellnessStudent LifeContent InspirationEntertainmentPolitics and ActivismSportsAdulting
About usAdvertiseTermsPrivacyDMCAContact us
® 2023 ODYSSEY
Welcome back
Sign in to comment to your favorite stories, participate in your community and interact with your friends
or
LOG IN WITH FACEBOOK
No account? Create one
Start writing a post
Currently

This decision is about image. It’s about hindering voices. It’s not about respect. 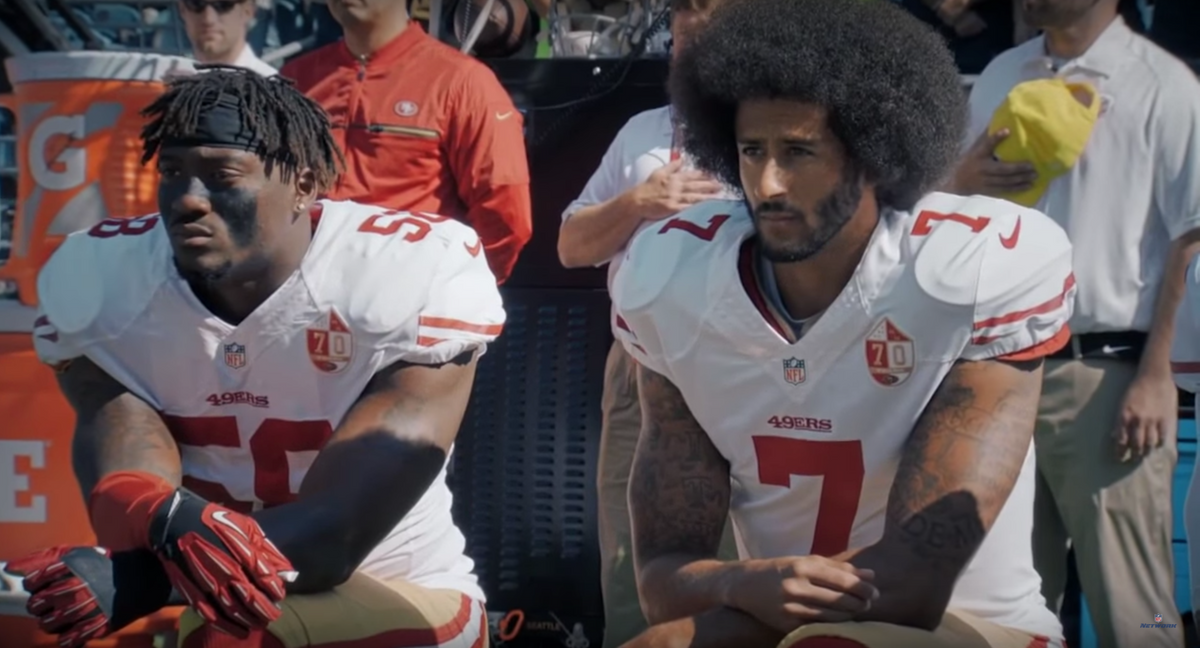 The NFL requiring players to stand during the national anthem completely misses the point of anything that has happened over the last few years.

First of all, taking away the freedom to do anything except stand doesn't really seem to be an attempt at “maintaining respect" for the anthem. It's pretty explicitly an attempt to curtail a very specific protest movement against police brutality and racism in the U.S. (otherwise known as Black Lives Matter).

Does anyone actually think the NFL cares what players do during the anthem?

I have no doubt that if the anthem hadn't become a protest platform, this wouldn't be happening. If other players had been on their cell phones, or were chewing gum, or exhibiting some other ungodly behavior during the national anthem, they wouldn't have received more than a slap on the wrist or some other individually-tailored sanctions carried out by the coach or team. I don't follow football.

That's not the point.

“The efforts by many of our players sparked awareness and action around issues of social justice that must be addressed. The platform that we have created together is certainly unique in professional sports and quite likely in American business. We are honored to work with our players to drive progress.

It was unfortunate that on-field protests created a false perception among many that thousands of NFL players were unpatriotic. This is not and was never the case.

This season, all league and team personnel shall stand and show respect for the flag and the Anthem. Personnel who choose not to stand for the Anthem may stay in the locker room until after the Anthem has been performed.
We believe today's decision will keep our focus on the game and the extraordinary athletes who play it -- and on our fans who enjoy it."

Alright, Roger (*cough* some Board of Mostly or Entirely White Guys who sit around a round table making Big Decisions), that's interesting. It's interesting that here the NFL claims to be “honored" to “work with" their players in “driving progress" surrounding “awareness and action around issues of social justice."

Because based on the past and what's happened today, I would say that's a pretty big lie. Actions speak much louder than words. They always have, and they always will.

The decision to act upon NFL players' right to take whatever posture they choose during the national anthem is, principally, in direct contrast to the First Amendment, and furthermore a blatant declaration that no, the NFL does not really care about social justice, or patriotism, or the “unique" professional sports platform of advocacy and awareness. The NFL's actions quite flagrantly display how little the NFL actually understands or cares about the anthem protest movement, Black Lives Matter, or the real issues at hand here.

It's not about who's “patriotic." It's not about respect. It's not about who's standing and who's not standing. It's about what these things mean. Players sat or kneeled to protest injustice in this country. Many people responded negatively. Thus, the NFL wishes to lessen viewer dissatisfaction and negative media attention. Maybe the NFL even disagrees with the political messages shared by these protests.

I very, very seriously doubt that the NFL actually cares about who is standing during the national anthem. This statement and policy are an attempt to end protest, not to foster or “show respect for the flag and the Anthem."

This decision is about image. It's about hindering voices. It's not about respect. It's not.

On the topic of patriotism: protest is a form of patriotism. Protest rises up out of individuals and groups of people that care enough about the United States and the people in it, that they want to make it better. Protest, petition, and voting rights are all we have as citizens to critique and improve our country. Protest is patriotism in action that goes beyond the forced complacency of standing for the national anthem.

The right to peacefully protest is what our armed forces serve for. Veteran Michael Sands expressed last year that protecting this right to protest, as a part of the U.S. Constitution and the nation they serve, is why our military fights.

"I can tell you, speaking for three generations of my family, it is precisely for men like Kaepernick, and his right to peacefully protest injustice, that we were willing to serve," Sands said.

If we're not protecting peaceful protest, what are we protecting? How do those with power in this country (including NFL executives) want citizens to exercise their rights? In the shadows, where no one gets offended, and no one is heard? Protest is about speaking out, awareness, and using the platforms available to us to voice what needs to change.

The NFL just took such a platform away. Players will now be fined if they do not stand for the national anthem. If it's not a choice, is it real anyways? If you care about “respect" so much, why are you attacking the very heart of what it means to be a patriot?

I would like to congratulate the NFL today on executing severe sanctions on the freedom of expression and even on patriotism in action.

How very unpatriotic of you. How very disrespectful.

Debt Ceiling Turmoil Proves Too Much for US Government

The real question of who pays for running the government

The US Debt Ceiling has been a long-lasting debate in the US and is an important part of the government's financial management practices. It is the total amount of money that the government is allowed to borrow to fund its operations, and must be negotiated and set by Congress. This limit helps Congress to manage the government's finances and ensure that the country remains fiscally responsible. In the event that the US runs out of money, Congress can increase the debt ceiling in order to borrow more money. If the debt ceiling is not raised, it could lead to defaulting on the nation's debt and adversely affect the country's financial standing. Therefore, it is an important measure for Congress to manage the nation's finances and ensure that the US continues to have a strong economy.

Does Tesla Autopilot Endanger Public Safety in the Name of Science?

As a major investor in the research and development of autonomous driving technology, Elon Musk has been instrumental in developing the Autopilot system. Autopilot is an advanced driver assistance system that is designed to detect potential collision and reduce driver fatigue. The system utilizes a combination of cameras, radar, and ultrasonic sensors to identify objects and vehicles on the road, and to provide visual and audio alerts to the driver. Musk's involvement in the Autopilot project has notably increased the safety and reliability of Tesla vehicles, making them increasingly popular among consumers.

The meteoric rise of the short-form video-sharing platform TikTok has created a cultural phenomenon, transforming the way we interact with and consume media. From Gen Z users to Baby Boomers, the app has attracted a wide range of users, leading to its impressive growth and making it one of the most visited platforms online. With growing popularity, TikTok has become an important part of our culture, providing endless opportunities for connection and entertainment.

The migrant problem at the US border is a complex and multifaceted issue. It is primarily driven by people from Central American countries such as Guatemala, Honduras, and El Salvador, who are fleeing violence, poverty, and lack of economic opportunity. As a result, many of these migrants seek refuge in the United States, often making dangerous and illegal crossings that involve significant risk. These migrants are often detained by US border agents and face deportation. The US government has responded to the migrant problem by increasing border security, constructing fences and walls, and enacting stricter immigration laws. The issue has become increasingly controversial, with many arguing for more humane treatment of migrants, while others argue for stricter enforcement.

Following the sudden collapse of FTX, one of the most reliable crypto companies, it's clear that we need more national discourse about crypto space. College student investors should have a seat at the table.

FTX was revolutionary. Its rise was as meteoric as its downfall, seemingly shattering the very ethos of cryptocurrency in the process. But one key stakeholder group is noticeably missing in the emergent post-FTX discourse: university students. That needs to change.

How BITCOIN Will Also Survive This Crash?

5 Ways Your Company Can Fight Inflation