What Happened At The Atlanta George Floyd Protests
currently

I Was At The Atlanta George Floyd Protests, Here's What It Was Like Before The Violence Started

What started out as a peaceful protest quickly resulted in destruction, with mixed opinions leading narratives on both sides. 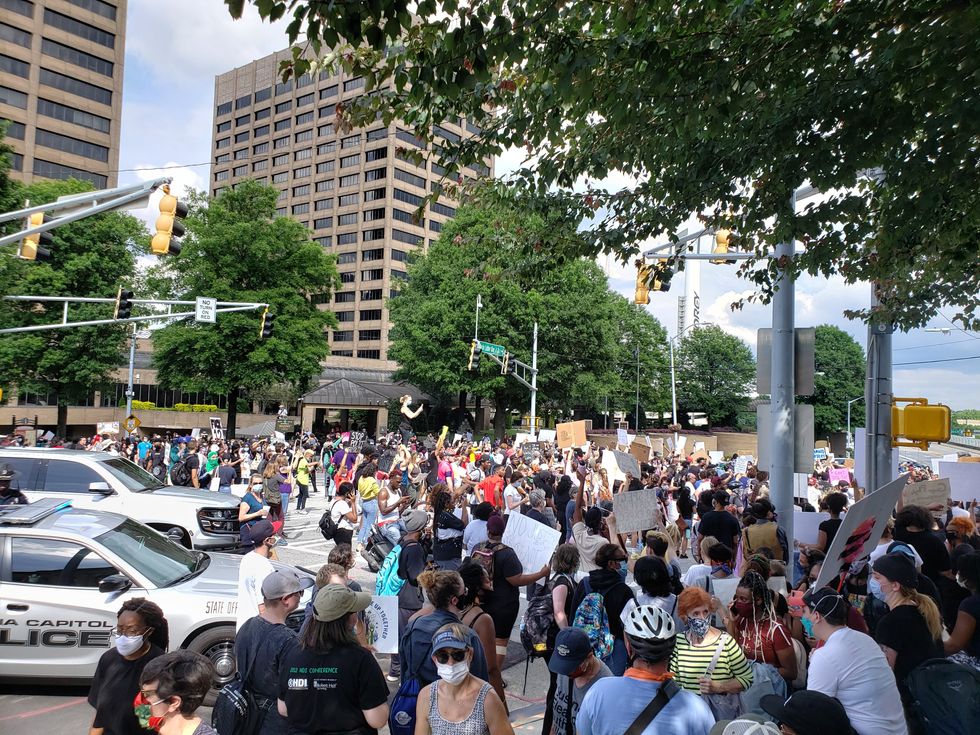 When I heard about the protests happening in my city in honor of George Floyd, a black man who was brutally and fatally detained by police in broad daylight, I was conflicted about the best way for me to support a cause that I was passionate about. The senseless killings of people of color in America had been weighing on me, and I was eager for a way to help, to do my part. I wanted to be out on the ground with my community, having our voices heard. However, there was the issue of the coronavirus, a very real and troublesome threat that is still controlling our daily lives.

I ultimately decided to attend the protests. Armed with a face mask and gloves, I parked at the Georgia State Capitol where the march was ending and joined at the outskirts of the crowd, joining in on chants of, "No justice, no peace" and "I can't breathe."

After a moment of silence and more group chants, the crowd marched back to Centennial Olympic Park, and I cheered from the sidelines. It was my way of showing support for my city while maintaining the best social distancing practices I could. I was beaming with pride in Atlanta — the crowd boasted people of many different colors, ages, and ways of life. This was the epitome of togetherness and solidarity for George Floyd, Breonna Taylor, Ahmaud Arbery, and the countless others who were ruthlessly taken by the police. I left the State Capitol believing the protest was over, and that once they returned to the Park, the protesters would disperse, and Atlanta would be remembered for a peaceful protest that sent a powerful message.

I could not have been more wrong.

A few hours later, I was glued to my TV screen, looking on in horror as demonstrators and police had an intense standoff at the CNN center. Protesters threw heavy objects and flashbangs at police. Cars, storefronts, and Atlanta's property were all being destroyed, burned, and vandalized. I was terrified for the retaliation that the protesters might face, terrified for the safety of everyone on the streets, and terrified for the aftermath of the violence. My fears were actualized when police released dozens of canisters of tear gas in an attempt to disperse the crowd.

Many businesses frequented and owned by members of Atlanta's black community were destroyed, and with the economic hardship of the pandemic not yet over, I was terrified for the people whose livelihoods were threatened by the destruction.

Mayor Keisha Bottoms implored the people of her city to "go home" if they cared about Atlanta. She reminded Georgians that Atlanta was not the enemy, and the concern in her demeanor was that of a worried and disappointed mother. The protesters did not heed her words.

I awoke on Saturday morning to images of my city that left the entire state shocked. Countless more businesses across the city had their windows broken. Broken bottles littered the streets. More cars were burned and vandalized. The pain of the city is loud and numbing, but the pain and anger of the protesters are even louder.

Regardless of your thoughts on these protests, especially the ones that turned violent, there is no denying that the anger and rage come from a real place. Racism is alive, rampant, and systemic in our country, and justice is not being served. People of color fear for their lives, the lives of their sons, daughters, brothers, sisters, and loved ones. Their fear is justified. Their anger is justified. We tried peaceful protests, yet the message was not heard, as evidenced by the slew of recent killings. I understand why people turned to violence in this heated time.

Even though I can understand the reason for the violence, the aftermath has left me speechless. I wonder who will ultimately suffer the consequences of the violence and how this will reflect on the very valid message the protesters were sending. I wonder how we can rebuild and recover from this in the midst of a pandemic. I wonder if Atlanta can come back from this better and stronger than ever.

On top of the physical and emotional destruction the city witnessed Friday night, social media was littered with theories about how what began as a peaceful and powerful protest turned violent. Some shared posts apparently of white teenagers instigating the violence. Others claimed the police catalyzed the violence by provoking the crowd. Other theories spread about a group who hoped violence would break out at this event and who had planted their people in the crowds to disrupt the peace.

Civil rights leaders from Georgia and across the nation spoke out about the events of the night. Many were devastated about the destruction, but they ultimately emphasized the message. They hoped that people would focus on the real issues and the whole reason the protests were organized in the first place. The need for change is severe, and it has to be done sooner rather than later. The violence is just a side effect of a larger, more dangerous beast that is the systemic and prevalent racism we have seen across the country. We can't forget that the protest began peaceful and that those individuals who marched still deserve their voices to be heard.