"It happens everywhere. Even in little old Oxford." — Margarette Beckwith 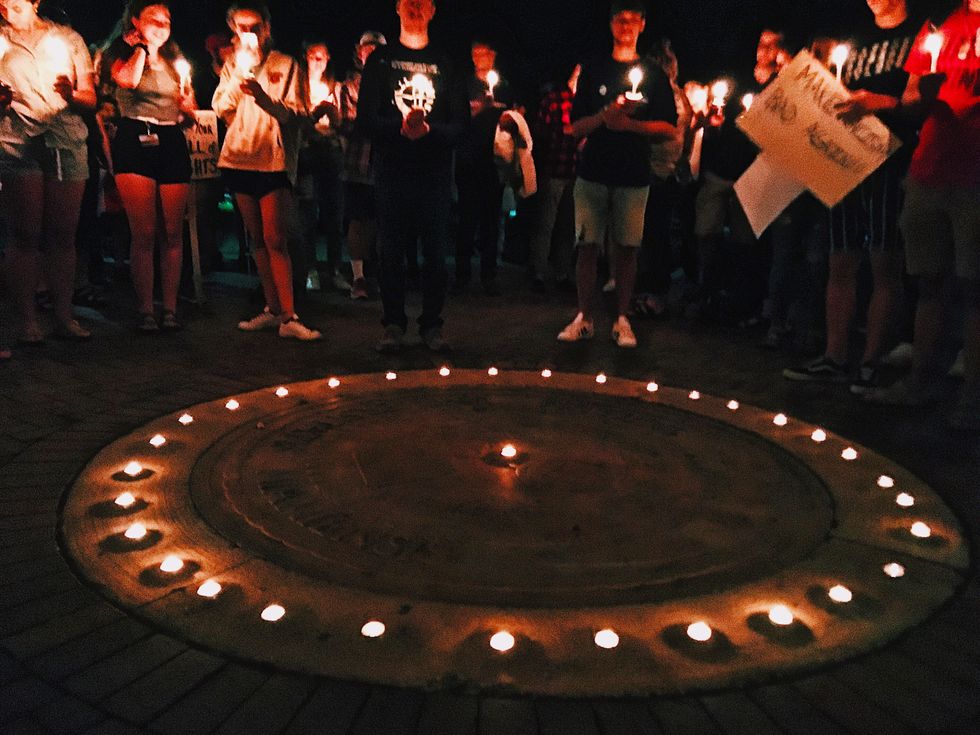 I wasn't sure what to expect that night. I had been added to a group chat over the summer, and I didn't entirely understand why. I'm young and inexperienced, what could I possibly bring to a political protest? I avoided the chat once school started, thinking maybe I'd stop by, but the chat seemed chaotic, and I was sure the rally would end up the same. I was, however, pleasantly surprised.

The events of Wednesday night, August 28, served many roles. It was a march of solidarity, a sign of community, support of human rights, an opportunity to grieve. The march, rightly labeled the "Action Against White Supremacy Rally," was conceived after the shootings in El Paso, Texas, and Dayton, Ohio, earlier this summer, which altogether left at least 31 people dead. It was formed by members of UNIDOS, College Democrats, Black Women Empowered, and Spectrum. As a response to the racist violence in El Paso, it was strangely ironic and almost insulting that on the same day of the rally, white nationalist flyers were taped to lampposts around campus.

Wednesday night at around 9:30 p.m., nearly 200 people surrounded the Phi Delt gates near Uptown. Students ranging from freshmen to graduate students were present, as well as faculty and Oxford natives. Many held signs with compassionate words plastered on them like "Civil Rights Are Human Rights" and "Where Is The Love?" One sign had the word peace written in multiple languages.

"This march isn't against ideology," one coordinator said. Despite the events that sparked the rally, it was not political. As one of the original facilitators, senior Clara Guerra, said, "This is a place to grieve."

While it was a place to grieve for some, everyone had different reasons for showing up late at night with their signs rather than staying home or walking farther to the bars, as so many students are wont to do at 9 o'clock on a Wednesday night.

Sara Palmer, a priest at Holy Trinity Episcopal Church said she was marching to "stand in solidarity for all who are victims... because it's getting worse." We spoke further, and she asked if I was a reporter. I had never considered myself one until then, and I only nodded my head. She also asked if I was Latina and smiled when I told her I was.

"I speak Spanish," she told me. "So I'm marching for Latinos and the LGBTQIA communities."

Another woman, Margarette Beckwith of Oxford, said she was marching to speak out against white supremacy because "it happens everywhere. Even in little old Oxford." There was a large group of older men and women, waiting on benches or standing, proudly carrying their signs. I was surprised to see them. Social media has warped activism into a young adult's job, but it was not only for college-age students on Wednesday night.

I wandered around the crowd, staring at signs, conversing with people I knew. I had somehow found myself at the front of the pack when I heard a voice. "Comrades, gather round!" it called over the crowd. I knew the boy speaking, though not personally. He had the same habit of referring to everyone as a comrade in the group chat I had joined. I still wasn't sure how I felt about being called a comrade, but I listened anyway.

Senior Adrian Radilla, a co-facilitator of the rally and president of UNIDOS, gave an introduction. "We do these chants to remember where we come from," he told the crowd. "We are in a long lineage of people who stand up to injustice and we continue that tradition tonight."

And so, a little after 9:30, the march from the Phi Delt gates to Roudebush Hall began. The whole way through the crowd chanted. They were forceful, they were powerful. "We marchin' for justice, for our sisters and our brothers," is how they started.

The chants continued up the steps of Roudebush Hall, where various students gave testimonies on how white supremacy has affected their lives.

"I am not able to have a conversation with my grandmother. I am 20 years old," said one student, Victoria Negron, as she told the crowd her parents never taught her Spanish to avoid the ridicule that comes with having an accent.

Another student spoke of his grandparents, Holocaust survivors. "I should not be here, but I am," he told us. Each person who came forward expressed their sorrows and frustrations. Some were hopeful, some were not. Others only asked the crowd to vote. Those two testimonies stuck with me. The boy speaking of his family and his heritage broke my heart. And Negron's story was something I knew firsthand.

I was taught Spanish but there's no use for it outside my home. I can barely last in a half-hour phone call with my mother in Spanish before I get anxious and forget the words. Spanish-speaking immigrants are ridiculed for having an accent, so much so that they won't teach their children their language, or their children will be too scared to use it and forget it. It might not seem like a big deal compared to more obvious effects of white supremacy, but a language is part of an identity. And white supremacy has stripped people of that identity, it has tried to strip me of that identity as well.

After the testimonies, the crowd made its way to The Seal, where candles were placed on the ground to represent those killed in El Paso and Dayton. Once all our candles were lit, we sang "Amazing Grace" and held a moment of silence. In the silence, we mourned the dead, mourned lost friends, and prayed we'd never have to stand here like this again.

But more importantly, in that silence, resting our heads on each others' shoulders, with the light of nearly 200 candles burning, we promised to act. The message would not end at The Seal, but continue on. Nearly 200 people made a silent promise to fight, to vote, and to change this country for the better.