The Maricopa County Attorney Election Has Already Made Arizona History

Both candidates are calling for reform in the criminal justice system, but regardless of who wins, either will make history as the first woman elected to this position. 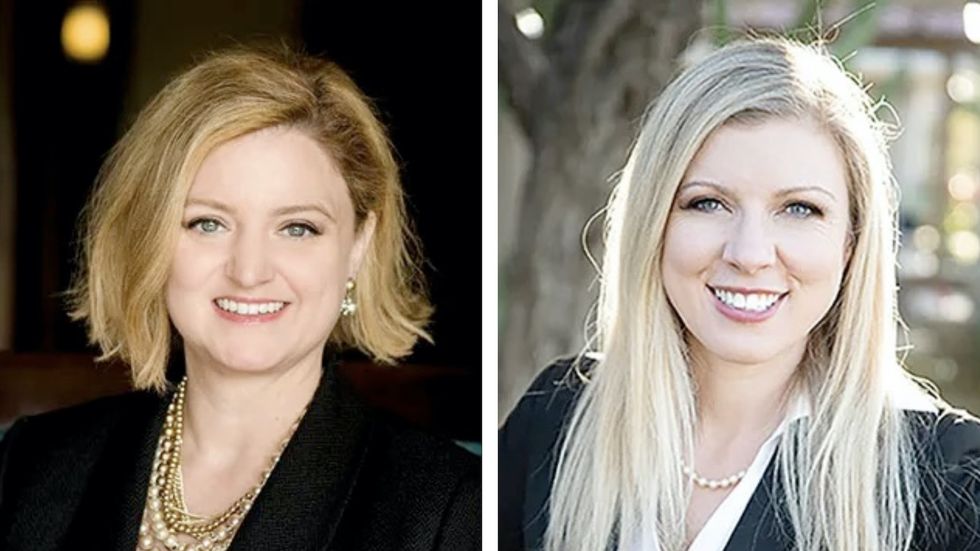 For the first time in the state's history, Arizona will elect a woman as the Maricopa County Attorney.

The Maricopa County Board of Supervisors appointed Allister Adel to the position last year, but this election marks the first time women will be representing both parties on the ballot. Democratic challenger Julie Gunnigle will face Republican incumbent Adel this November in a bid for the prosecutorial seat of the nation's fourth-largest county.

The election comes in the midst of a politically turbulent time for the country, whose reverberations are felt in the streets of Phoenix. Protesters took to the streets the weekend of October 3 to dissent Adel's decision to not charge the DPS officer responsible for Dion Johnson's death.

As increased attention turns toward police violence in Arizona, more focus than ever has been placed on reform within Arizona's criminal justice system.

The weight of this election has not been lost on Julie Gunnigle, who said she aims to be the first Democrat elected to this position in 40 years. In a candidate meet and greet with Ahwatukee residents last Thursday, she outlined some key features of her reform plan, including increased police accountability, a focus on education in juvenile detention centers, and more community involvement.

"It is my calling and something my mama taught me very early in life — what it means to be in public service," Gunnigle said.

A study done by The Arizona Republic showed that Phoenix led the nation in police shootings per city with 44 in 2018. The trend of police violence has yet to slow down in Phoenix. The Maricopa County Attorney's Office reported 39 officer-involved shootings in 2020 as of September 30. At least one of those shootings occurred in Ahwatukee, with protesters gathering outside the Maricopa County Attorney's Office on Monday to demand justice for the death of Ryan Whitaker.

"That's one of the reasons I'm running now," Gunnigle said. "I don't think we have enough accountability in our government."

If elected, Gunnigle has said she hopes to hold law enforcement accountable by having a full and transparent Brady list and an independent, community-involved unit to investigate police use of force. Gunnigle also wants to tackle the racial disparities within the system.

"Our county has some of the biggest racial disparities in the nation when it comes to policing and prosecution," Gunnigle said. "The biggest differentiator I see between myself and my opponent is that I'm willing to acknowledge it."

A study done by the American Civil Liberties Union of Arizona in 2018 showed that Blacks and Hispanics prosecuted by the Maricopa County Attorney's Office spent more time behind bars than white people. It also showed that 11.2% of white people had their cases dismissed compared to 10.6% of Black cases and 8.4% of Hispanic ones.

For Lori Vanover, a fourth-generation Arizonan who now lives in Ahwatukee, these statistics are undeniable.

"I truly believe that brown-skinned people are treated differently in our current justice system," Vanover said in an email. "There is racial bias. To deny it is ignorant or intentional. There is social injustice that must be rectified."

Gunnigle has said she hopes to address some of these inequalities by reforming drug prosecution and increasing education in juvenile systems. Gunnigle also has committed to ending cash bail.

Rather than focus on non-violent, low-level drug offenses, she believes resources need to be reallocated to treatment programs in order to focus on rehabilitation.

Gunnigle has also said she hopes to end the school-to-prison pipeline by taking a closer look at children within the criminal justice system. She committed to reviewing the placement of officers inside schools and focusing on funding public education.

"The best thing we can do if we believe in our children and we believe in ending the school-to-prison pipeline is to fully fund public education," Gunnigle said. "That is the greatest predictor of whether or not a child will live forever in our criminal justice system."

Gunnigle's opponent, Allister Adel, also has similar issues on her mind going into the election, but the two differ on the extent of their reforms. Adel, however, has said she shares Gunnigle's desire to implement more mental health services and focus on treatment programs.

In a tweet shared on October 5, Adel highlighted her elimination of the $630 diversion fee and her Treatment First approach to drug possession cases as some of the reforms she has implemented.

In terms of police accountability, Adel created the Conviction Integrity Unit, which investigates potential inappropriate police conduct and other allegations of prosecutorial misconduct. Earlier this year, she also added citizens to the Critical Incident Review Committee, which reviews police use of force incidents.

Adel also has spoken out in support of mandatory body cameras for all uniformed officers.

"As a prosecutor, I understand the importance of capturing body-worn camera footage when considering a charging decision," Adel said in an email. "That is why I support mandated use of body-worn cameras for all law enforcement officers throughout the state. It is critical that we get these resources deployed statewide as soon as possible."

For Ahwatukee resident Michael Scheller, who has lived in the city since 1992, he considers body cameras a "must."

"We need this video evidence to exonerate good police work and prosecute when needed," Scheller said in an email.

The direction in which this reform goes will be determined by citizens like Scheller in the election on November 3, 2020.