Madonna Shares Video From The Anti-Semitic And Homophobic Louis Farrakhan

In the age of holding others accountable, Madonna and others should take responsibility for promoting an anti-Semite and homophobe. 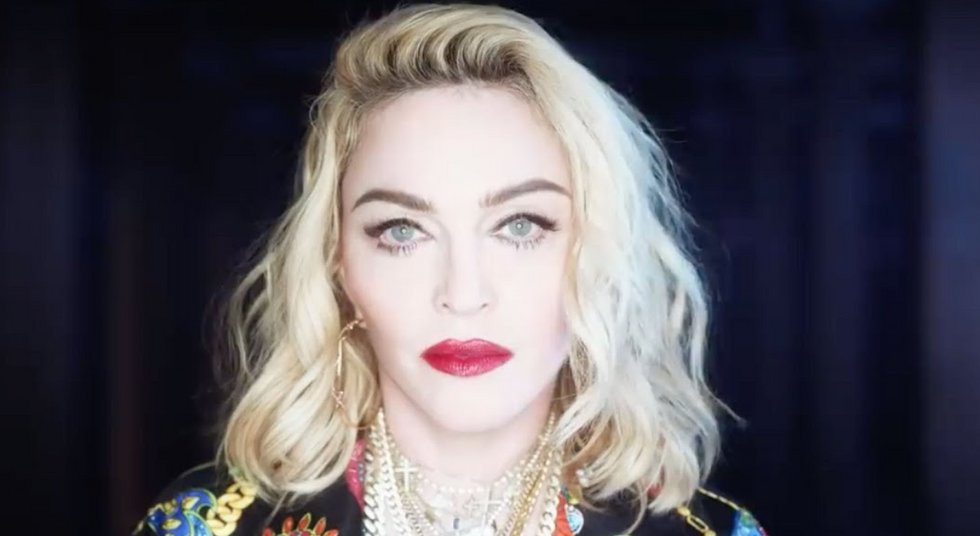 Anti-Semitism is unfortunately alive and well in America. It has infiltrated pop culture and politics in extremely frustrating ways. With the recent controversy surrounding Nick Cannon, it appeared that outrage over anti-Semitism would carry the same weight as other forms of discrimination. However, it has become blatantly obvious that isn't the case.

Madonna is the latest celebrity to slip up. On the Fourth of July, the singer uploaded a video of Louis Farrakhan to her Instagram. The singer has been sharing posts related to the Black Lives Matter movement. This post was one of many related to the issue of race in America. Many fans in the comments were quick to point out that Farrakhan is not only anti-Semitic, but has made statements against the LGBTQ community as well.

However, Madonna hasn't deleted the video from her page. She is hardly the first celebrity to get in trouble for promoting Farrakhan. Diddy and Chelsea Handler are among other famous faces who have promoted him. Some, like Handler, have apologized. Whereas others, like Diddy and Madonna, have not.

Racism and police brutality are important issues. They should definitely be spoken about. However, there are plenty of other voices who aren't spewing hateful rhetoric that we can elevate. Being part of an oppressed group doesn't make you immune from holding onto your own prejudices. It's an unfortunate reality and we must be more careful about who we promote.

In one way, having these celebrities promote someone like Farrakhan is irresponsible. A simple Google search would've made it clear this was not a man to draw attention to. I'm not sure about Diddy, but I'm certain Madonna and Handler wouldn't have promoted him if they knew Farrakhan was such a man. I don't think either one of them is anti-Semitic or homophobic.

However, this should serve as a lesson to celebrities and everyone else to think twice before you post. If you are unaware of someone, do some research before promoting them.

In another way, this (intentional or not) continues a trend among many left-wing people. It's a common behavior to excuse anti-Semitism for the sake of other social justice causes. We've seen it countless times when discussing the Israeli and Palestinian conflict. Now we're seeing it again when discussing the Black Lives Matter movement. Believe it or not, there are plenty of Black people who don't agree with Louis Farrakhan and those like him.

It's OK to condemn such rhetoric. We can believe in Black Lives Matter and condemn anti-Semitism no matter whose mouth it's coming out of. It doesn't have to be one or the other.

Promoting Farrakhan is also a way of excusing homophobia. However, I believe the difference is that racism and homophobia are more widely condemned when coming from a public figure. Anti-Semitism still seems to be something famous people can get away with more often.

Nick Cannon was dropped by ViacomCBS following his initial statement, but Fox wasn't so quick to fire him. They eventually decided to keep him after his apology, but the apology came only after his initial statement. That statement explicitly stated he wouldn't apologize. This is very similar to Chelsea Handler's initial reaction. I believe if this were a white celebrity saying something racist against Black people, no network would wait that long for an apology.

Pop star Dua Lipa claimed people in the Israeli government were "fake Jews" on Instagram. The post was initially shared last month and has since been taken down. However, there has been no apology or accountability from Lipa. Very few seem to care about Madonna or Diddy promoting Farrakhan and I doubt they will apologize.

Don't get me wrong, I don't believe in cancel culture. I don't want Madonna or Diddy to face the kind of backlash that ends their careers. I just want them to hold themselves accountable. I want education, not punishment. Education is the only way we can make progress. Punishment will just silently amplify the prejudice or ignorance already festering inside someone.

We're living among really frustrating and uncertain times. The social justice movement is in full swing and thank God for it. We're living in an election year and everyone has an opinion on what will best serve our country in the future. So much is at stake right now and it's possible to fight several battles at once. We don't have to look past anti-Semitism and homophobia to fight for Black lives.

If progress is what we want, we must unite and call out all forms of bigotry. That includes holding ourselves and others accountable when they do something wrong. This is the only way things will truly start to improve.