With her current stint at BAM's Howard Gilman Opera House, Madonna proves you can be both intimate and theatrical. 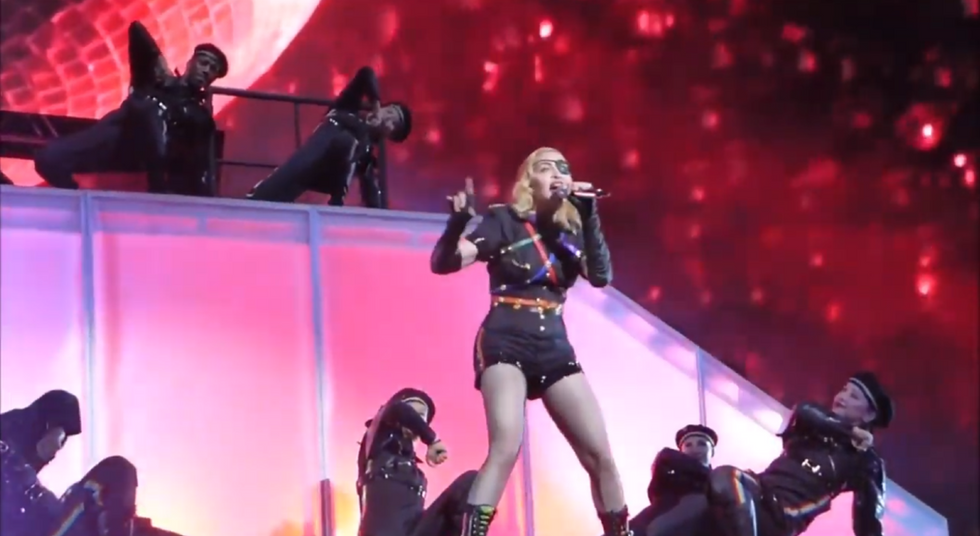 Madonna has toured stadiums and arenas around the world for decades. She has performed to sold-out crowds singing every word of her songs.

After years of looking out to a sea of fans, Madonna felt the need to reinvent the touring experience, both for herself and for her audience.

When the Madame X Tour was announced, it was revealed to be a theater tour. It seemed like a natural next step for Madonna. At 61, Madonna certainly isn't finished. However, with age comes a natural decrease in physical stamina.

It would be impossible to think Madonna could keep up with the kind of dancing and acrobatics her stadium shows require forever. She would have to tour in a different way eventually.

That isn't to say Madonna just sits around with a guitar for the entire show. I attended the show on September 26 and as a long time fan, I was curious to see what she had in store for us this time. There are plenty of yoga moves and dancing to prove Madonna is still in great shape.

There is also plenty of theatrics to ensure this isn't a show solely focused on the music. There isn't even a main band visible on the stage. There are a few musicians that appear here and there. However, the show is mostly focused on the screen projections and dancing.

The show opens with a quote from writer James Baldwin with the line, "Artists are here to disturb the peace." This particular line would be repeated several times throughout the show, both on-screen and by Madonna herself. "God Control" opens the show and has a striking similarity to her performance at Pride Island back in June. In fact, "Vogue" and "American Life" seem to be lifted from the Pride Island mini-concert.

Politics is a big theme throughout the show. After "Human Nature," her daughters Mercy, Estere, and Stella came out on stage. Madonna used the moment to make a feminist statement about women's rights. She even had one of her twins say, "#TimesUp."

It feels kind of strange when adults use their children to make political statements. It's one thing if they're teenagers, but it feels weird when the kids are as young as her twins.

They aren't old enough to understand these issues or form their own opinion. It almost feels like they're using young people to convert others to their way of thinking.

Madonna also spoke about abortion during her performance of "Papa Don't Preach." Having only performed the first verse and chorus of the song, Madonna asked the crowd if they would support her right not to keep her baby.

The crowd obviously cheered in support. Madonna then said that she believes a woman should have the right to choose what she wants to do with her body the same way a man gets to.

I fully support a woman's right to choose. However, I believe abortion is a health care issue, not a gender issue. There is no male equivalent to abortion. Therefore, you can't say women are being denied a right that men already have.

Sure, some pro-life individuals may be sexist, but there are plenty who aren't.

There were plenty of times this effect worked and impressed the audience, myself included. During songs like "Crave" and "I Don't Search I Find," city skylines filled the backdrop. Those effects were impressive.

However, during the opening of "Medellín," Madonna types a spoken word introduction, which appears on the screens. Due to the screen projecting the words outside the stage, it fell flat because the words were hard to make out as a result. But the highlight of the entire show came towards the end when Madonna performed "Frozen."

Video of her daughter Lourdes was projected on the screens and made for some very impressive effects. It also made for an emotional and sentimental moment in the show.

One of the songs Madonna was highly rumored to be performing in this show was her 1991 hit, "Rescue Me." While the song did appear in the show, it was only during a brief spoken-word interlude, where dancers performed a heavy breathing dance routine.

While the fans in the audience seemed to appreciate the artistic aspect of the performance, I couldn't help but feel disappointed. The whole thing felt like a big hyperventilating mess.

In fact, you can count the number of early hits Madonna performs in full on less than one hand. The majority of the show revolves around the new album. While I personally love the new album, it still feels wrong to not have more of a balance between the old and the new.

When certain early songs would make a very brief appearance, like "Express Yourself" or "La Isla Bonita," it just felt like a cruel tease. Yet, I was happy my favorite songs on the new album, "Crazy," "Come Alive," and "Extreme Occident," were performed live.

Madonna also performed some cover songs in this show. Among the covers were, "Fado Pechincha," "Welcome to My Fado Club," and "Sodade." She performed the first song with 16-year-old Gaspar Varela, the great-grandson of the late Celeste Rodrigues. Rodrigues was a singer who Madonna met while in Portugal. These covers really showed the vocal talent and range Madonna still has.

Madonna also spoke to the audience quite a bit during the show too. Lately, Madonna has expressed, either ironically or unironically, her desire to be a stand-up comedian.

During the show, she tried her hand at a few jokes. While they got some laughs out of the audience, the truth is, the jokes weren't funny. Joke telling is one talent Madonna has yet to master. If she's going to continue performing live, she'd be smart to stick to music.

"Like a Prayer" was the one song that got everyone in my section standing up. The track is a guaranteed crowd-pleaser. While the staging and vocals from Madonna were impressive, the background singer who sang the gospel part toward the end wasn't as much.

She sang the part well enough, but Niki Haris and Nicki Richards have sung it far better in the past.

The show closed with "I Rise," another favorite of mine from the new album. The screens showed images of various protests, minority groups, and people who have been dealt a bad hand. While the song itself was inspiring, the context of it within the show seemed to be, once again, politically motivated.

All in all, Madonna's Madame X Tour brought a healthy combination of theatrics and intimacy. While there was nothing about the show that stunned on the level of Madonna's previous tours, there was still plenty to enjoy.

Madonna's new show may have its hits and misses, but she is certainly still the Queen of Pop. There is no doubt she will continue to tour and entertain for many years to come.