Hey, Is That A Juul?

Hey, Is That A Juul?

A perspective on Juuling from someone who used to do it. 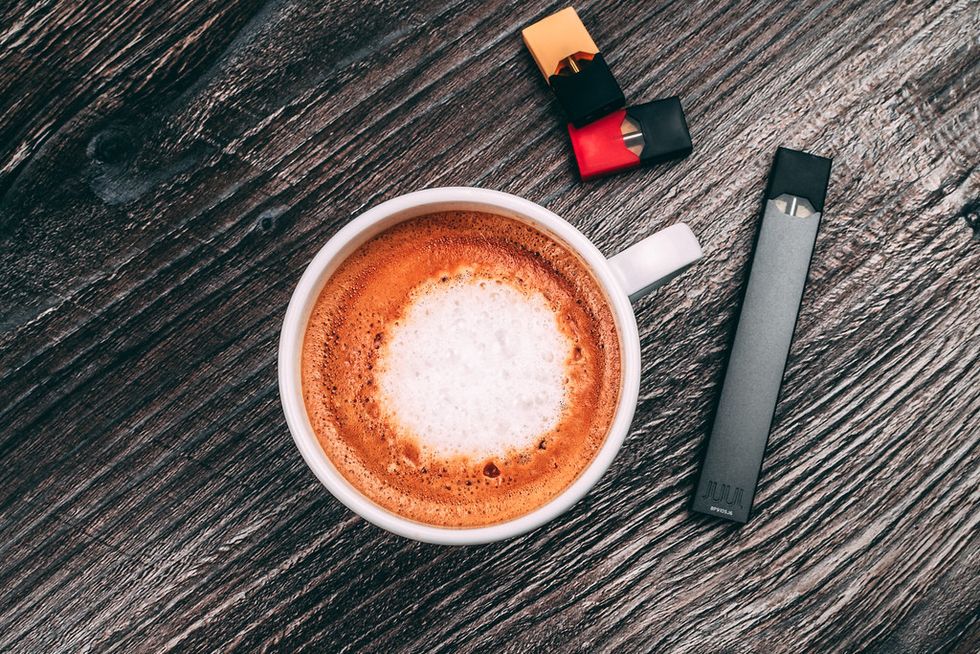 I used to Juul.

I can fully admit that I used to Juul. It was a nasty habit I picked up in high school to try to be cool. However, it turned into a full-blown addiction after a month of using it.

A lot of adults make it seem like drugs are the most awful and horrible things in the world that get handed out by the devil himself. You see all these videos at school depicting shady people in back alleyways handing out bags of pills or cocaine from inside their trench coats to small children with some cliché saying like, "Hey kids, you want some dRuGs?".

But in reality, it's just your friends hanging out at a party or in a basement. One of them might pull out some weed or a Juul and just casually be like, "Anyone want a hit?".

Time slows down, your heart begins to beat louder as the people around you each take a hit one by one. You're sweating because you've never done anything like this before. Drugs are bad right? But why are your friends doing it? Does this mean you have to do it too? You don't want to seem like the only stuck-up person in the room, right? So you puff your chest out, take the joint and inhale one long breath.

That's usually how it happens. Even if your friends won't really care if you do it or not, you might still feel that same amount of peer pressure that usually leads to taking the drugs.

Nicotine is one of the most common substances that children 18 or younger get addicted to today, especially since the Juul came out. It had become an accessible drug that kids saw as an opportunity to be "cool" or "like an adult". I remember when I was in high school, kids (Including me) would smoke anywhere from home to the bathroom in school to even in classes. Everywhere I looked, people were either hitting a Juul or asking someone else if they could hit their Juul. It had become such a deep-set part of our normal everyday lives that none of us would blink an eye towards seeing smoke/vapor coming out of a bathroom stall.

I used to smoke a pod a day which would be around 20 cigarettes a day. That was pretty bad considering I had started when I was fifteen. I was always out of money because it was so expensive as well. $20 for four pods that would only last me 4 days. I would be back to my plug with $25 every week. (The $5 is for commission to get me the pods). It would possibly even be gone quicker than that because I would be the one others would come to just to get a hit off of. I'm a people pleaser, so of course I would say yes to everyone unless I didn't have anything.

It was exhausting, but at least it helped with my mental health. It numbed everything and made it seem okay. Nicotine acts on the reward circuitry in your brain and makes you depend on it to feel pleasure from smoking it. I like to think of it as a smart drug. It knows how to get people hooked on it and knows that once you are hooked, you're stuck with it.

People in today's culture seem to know the risks and understand the consequences, but everyone is either so depressed or too caught up in it to try and stop. Even if an awful story is on the news or you see an article online, it doesn't stop you. "I don't care what happens to me," or "It won't happen to me", is the most common line that will come out of a teenager/kids mouth. Which only fuels a child's invincibility complex. I even hear it from adults that nicotine won't hurt them and they can stop whenever they want.

It's a poison people are willing to pay for and put into their bodies because it makes them feel good.

Now, I know this article will just be another story swept up in the sea of, "Don't do drugs, kids!", but coming from someone who used to Juul and KNOWS how addictive it is, it's worth it to stop.

After I quit, my mind would become so much clearer. I'm able to articulate my words and I can breathe so much easier. My entire body just feels so much better than when I was on it.

I would say it's definitely worth quitting, but that's a decision that's up to you. I can't force you to do anything and neither should anyone else. It should be something you stop for yourself.