That Time I Sang A Duet With Sara Bareilles

That Time I Sang A Duet With Sara Bareilles

Living through my wildest dream. 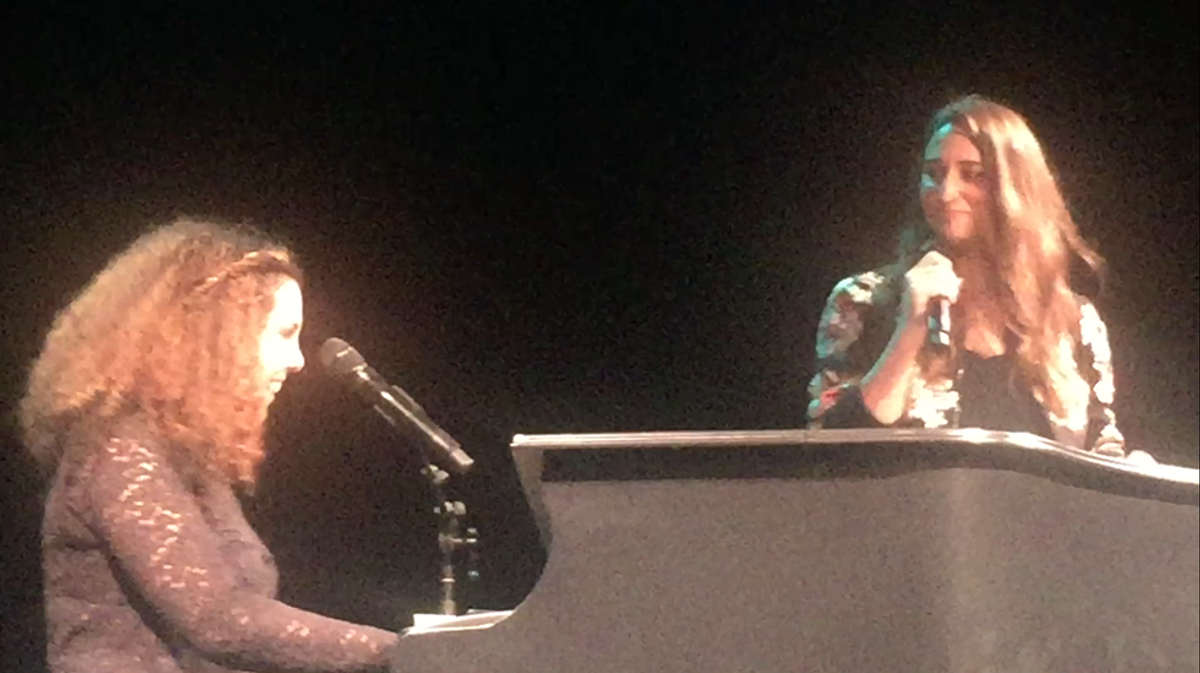 I began last week by posting my first Odyssey video, a cover song by my hero and musical inspiration. I ended last week performing that song with her, on stage, in front of a concert of cheering fans.

Let me tell you how that happened.

Bonnie Hayes, Chair of the Songwriting Department here at Berklee College of Music and a successful songwriter/performer, was asked to interview Sara Bareilles at a Q&A and concert in Concord, Massachusetts. I was lucky enough to tag along. Sara has been my biggest influence since I was little, and just the fact that I was going to be in the same room as her, watching her perform, was amazing.

It got even better. I was able to meet her backstage before the show! We had an actual, real-life conversation! So many things were going through my mind. It was hard to form words or even move, standing in front of this person I’ve looked up to my whole life. I probably looked like a mess, stumbling over my words. But one of the best things about Sara is how down to earth she is. She is one of the nicest, most caring, modest and sincere people I’ve ever met.

After talking to her for just a few minutes I already felt like I was having a normal conversation with a friend. She asked me about school and what I was planning on doing after graduation. We talked about her book. I told her how much her music means to me.

I also told her that I cover her song, ‘Manhattan,’ all the time at my shows.

And then she asked me if I wanted to sing it with her on stage for the encore!

As nervous and shocked as I was, I immediately said yes, pretty much peeing my pants just thinking about how I would even be able to go up on stage next to her.

It’s a crazy feeling to have one of your wildest dreams come true right in front of your eyes. There were so many emotions going on inside me all at once. I don’t even really have words to describe it. All I kept thinking was, is this real? Can this actually be happening?

Walking out on stage with Sara was the scariest and most nerve-racking thing I’ve ever done, but also the most thrilling and exciting. After watching her perform for an hour, I was going to sing and play her own song in front of her and all of these people! The lights were so bright. I just looked out into blackness, not even able to see the audience. Maybe this is a dream, I kept thinking. It’s got to be. But then I looked over to my side and there she was, standing next to me, a mic in her hand! My whole body was numb, my hands were shaking as I played the piano, and it was hard at times to even find my voice, which you’ll notice in the video! Sara was so gracious and supportive and helped me stay on track the whole time.

The way she talked with me and the audience was amazing! She made it an experience for everyone, and even had the crowd rooting for me when I made a mistake. It took a lot of strength and feelings I can’t even describe to stay up there and keep going, not even really knowing what the heck I was doing! I may not have sounded as good as I hoped, but it was worth every second.

On Friday, I met my biggest inspiration and hero and, for a few minutes, we shared a stage. Earlier that night, on the way to the show, I never expected this was possible. Sure, I’d dreamed about it. I’d tried to plan out what I’d say and do, but when it actually happened, it was unlike anything I could have imagined. In a way, it’s better when things don’t go quite as you expect them to, though, because that makes us human. Life doesn’t have a script or a map. Unexpected things will happen and, speaking from experience, I can tell you it’s better, more magical, and more absolutely breathtaking when they’re left unplanned.

After this experience, I know that anything is possible.

Thank you, Sara. Your courageous honesty, never-ending passion, and hard work have inspired me to be the musician and person I am today. I’ll never forget this night.