10 Of The Best Covers Done On 'Glee' Ranked

10 Of The Best Covers Done On 'Glee' Ranked

If you love music and showtunes, you're probably already a 'Glee' fan. 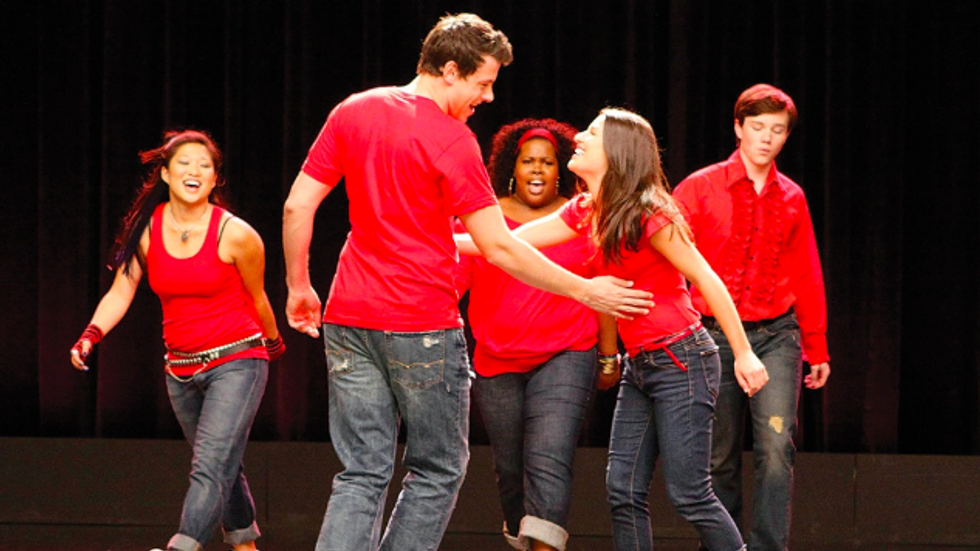 "GLEE" is one of those feel-good shows you can never get enough of. With the high school drama plotline following a rag-tag group of kids that just want to perform some amazing tunes, people adored this show for all the years it aired.

Throughout the show, a fair share of Journey, some oldies, some newbies, and everything in between was performed and sang by different characters and cast members. Every genre is represented on "GLEE" from rap to Broadway, to country, and they sang some of the best songs to date from each. That being said, let's take a look at the top ten best covers performed on "GLEE" ranked:

This is arguably one of the most iconic, if not the most iconic "GLEE" song (hence the #1 spot). Mercedes' “don't stop" at their first regionals competition was a staple addition for the entire song after that moment. The New Directions sing this song all the time and a good "GLEE" fan never gets tired of it, or any of the countless Journey songs they've sung.

From Rachel singing this by herself (which is really ironic as her onstage mother is the main character in 'Wicked' on Broadway in real life) to Diva offs, this song really makes me wanna throw on my best outfit and sing my heart out with pride, thanks to all the "GLEE" cast members that belted out this song.

Not only does this song promote good and positive vibes all around, but Rachel Berry absolutely kills it every time she sings this in preparation for her dream of being in "Funny Girl" on Broadway.

Mercedes truly unleashed her closeted diva to a full-blown diva throughout the series and this was possibly her most powerful solo.

The Warblers become a major part of the series later on and even sparks one of the show's cutest relationships. Their rendition of "Teenage Dream" truly rivals the original, which is why it landed a spot on this list.

Santana, although a bad-ass, is an underlying character in the Glee Club. With her performance of "Valerie," she truly proved that she's just as talented as all the other members and gave the world an iconic version of an oldie- but a goodie.

One of the show's most moving performances of all, featuring the Glee club of the Haverbrook School for the Deaf. The rendition begins with the deaf children singing and signing the song when the New Directions join in to help them. The McKinley students even begin to pick up some signs and sign the song with them.

The episode "The Quarterback" was a very special tribute to a dear character, Finn Hudson, when the actor who played him, Cory Monteith, passed away. This song was sung as a powerful ballad in honor of him by the current Glee members that he was helping Mr. Shue and his former friends and Glee club members he went to high school with. Definitely one of the most surreal moments of "GLEE."

Vocal Adrenaline may have been the New Directions' arch nemesis, but they did put on a damn good performance with an amazing rendition of one of the hardest songs to ever be sung. 'Nuff said.

I couldn't end this list without adding in one of the Britney tributes from the "Britney" or "Britney 2.0" episode. "I'm A Slave 4 U" was performed by Brittany S. Pierce in her very vivid dream at the dentist. Prior to this, she was afraid of living in Britney Spears' shadow because they are both “Britney Spears," but then after the initial dentist visit, the ditzy character gets so excited to go back again with her best friend where Britney Spears continues to bring out her alter ego.

Special mention to "Make You Feel My Love" performed by Lea Michele in honor of Cory Monteith, otherwise known as her on-screen boyfriend Finn Hudson- who was also her boyfriend in real life. Literally, nothing gave me the chills quite like this performance did. Her pain was real and we all felt it. Thank you, Lea, and all of the "GLEE" cast for giving us so many amazing renditions, covers, and new songs that made this list very hard to compile.