Dear Baylor Freshmen, Stay For The Entirety Of Our Football Games

To The Baylor Freshman Who Left Before Our First Home Win Of The Season, Stay For The Entire Game Next Time

Wear that Baylor Line jersey with pride and stay the entire game. 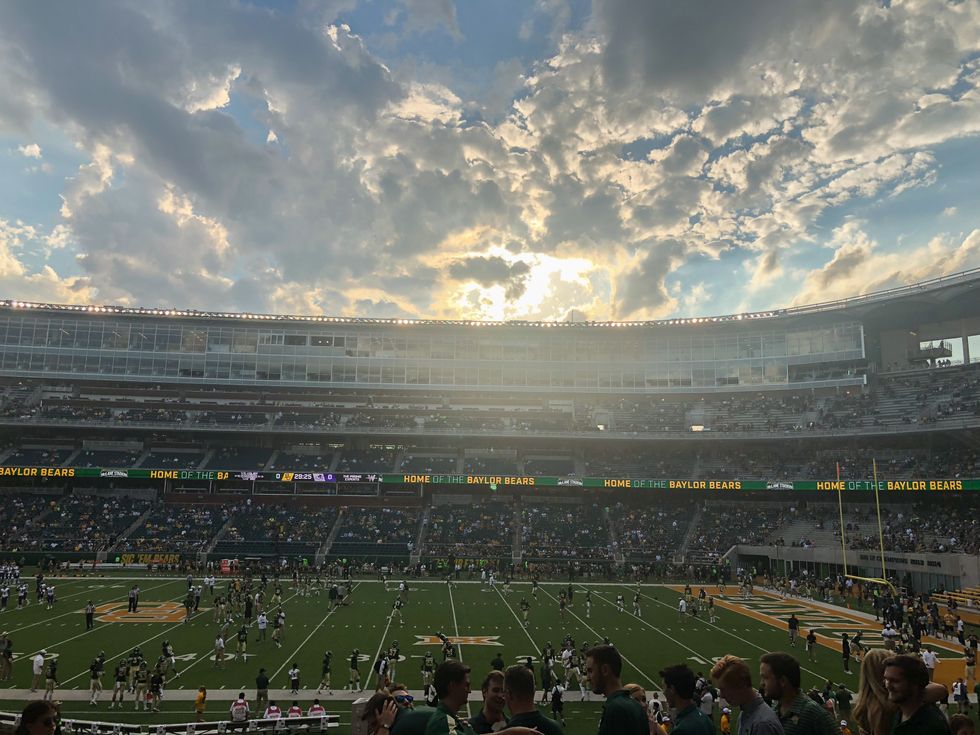 There is a certain kind of energy on Saturdays here in Waco. People sport Baylor green and gold in every shape and form. Cowboy boots, gold and green attire, and the Baylor spirit filled McClane Stadium on Saturday, September 1st, the opening game of the 2018 football season. And somehow, the excitement and anticipation weren't enough for some members of the freshman class of 2022.

Last year as a freshman, I was excited to go to my first football game as a Baylor Bear. I was told about the feeling of running the line for the first time and the hype about Baylor football games. I ran that Good Ol' Baylor Line with pride, feeling like a part of the Baylor family as everyone in the stadium cheered my freshman class on. Feeling out of breath, I stared up into the crowd with the biggest smile on my face.

So on Saturday, as I stood in the stands this time, I felt the energy and excitement of the freshman class as they raced across the field. They filled in the gold bleachers just a few rows in front of me and the game started.

But as the first quarter went on, I saw the golden bleachers start to empty. Freshmen in gold jerseys started to leave the stadium as the Bears fought for the first home win since 2016.

And I was mad.

For the first time, I was witnessing a Baylor home win and people were leaving the stadium. Touchdown after touchdown people left the stands. Maybe they thought it was a guaranteed win that wasn't worthy of being watched. Maybe because it was Abilene Christian that we were playing that they left. Perhaps it was because they were tired and they wanted to go home. Whatever it was, I got mad at people leaving the game early. Why?

It was the first game of the season. The first game after a not-so-amazing season and we needed to support our Bears.

Yes, the game felt really long because the first quarter felt like forever. But as a freshman, you should be excited to watch every second of your college's football games. It's one of the best traditions you have as a Baylor student. That gold jersey you wear on your back means something. It represents the generations past, present, and future that have and will run the line. Running the line is one of the first traditions we have to participate in as freshmen. Just as we supported you running across the field, stay in the stands and support our football players.

As a sophomore, I was really excited to watch the freshmen run across the field just as I did last year. I stayed the entire time last year, singing "That Good Ol' Baylor Line" until I lost my voice. But as the freshmen section emptied, I felt heartbroken for those who had already left. They didn't get the chance to chant down the clock timer with 10 seconds left as the Bears were up 55-27. Fireworks went off as the game ended, and they missed out on that, as well as singing our school song.

So freshmen, next time, don't leave early. Even if we are losing with five minutes left in the game, stay. There's a reason that we stay for the entirety of the game. Our football players are fighting for a victory, so you need to stay and back the bears. We trusted the process. Now it's your turn to back our team.

From Your Site Articles
Related Articles Around the Web
football
Report this Content
This article has not been reviewed by Odyssey HQ and solely reflects the ideas and opinions of the creator.
Swoon

Yes, Of Course I'm Proud to Be a Coach