"But you are an artist, and your mind don't work the way you want it to" 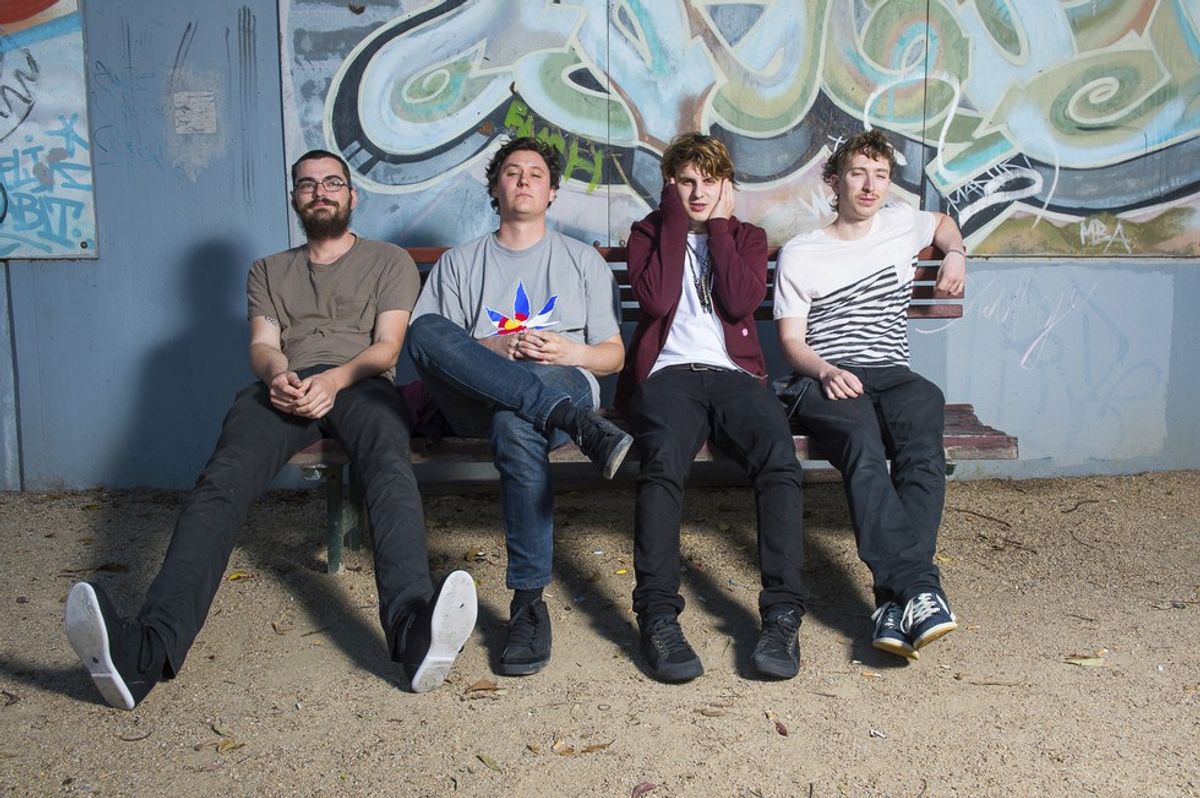 The Front Bottoms are known for their lyrics. What on the surface sounds like a strange pairing of words, usually becomes a well thought out metaphor. That's the beauty of lyrics, you can string together the strangest ideas and form them into something beautiful. The Front Bottoms do this well, too. It's one of the many things that made this band so special to me.

To help show the beauty that is The Front Bottoms' lyrics, I've created a list of some of the best lines. This list is completely random.

1. "I totally get you, I was a birdcage and you were meant to fly"

Taken from the song Wolfman, this is one of the most beautiful lines in the song. A common theme in The Front Bottoms' music is being brokenhearted and just overall sad. Though being overused, they write it so beautifully. With that being said, this is such an amazing way to phrase holding someone you love back. Every time I hear it, it still gives me chills.

I know I said 'lines' but this entire verse is overwhelmingly beautiful. Taken from the song, Legit Tattoo Gun, the song focuses around being sad, as usual. However, the first time I listened to the song, this verse caught me off guard. But then when I was listening to it for the third or fourth time, it actually hit me. I felt it. I too, realize the tree feels bad due to how it felt. It's amazing once you actually get it. Not to forget, the song slows down at this point, giving more impact to the verse altogether. It's just truly gorgeous.

3. "And it should've felt good but I can hear the Jaws theme song on repeat in the back of my mind"

The first time I listened to the song, Twin Size Mattress, and heard this line, it punched me in the face. It came out of nowhere and put me in a trance. I'm not sure if this phrase is used elsewhere but in my eyes, it's the perfect way to phrase an feeling impending down

Flashlight is without a doubt my favorite song by The Front Bottoms. There's just something about the vibe that the song gives out that makes me feel at home. I can vividly remember the first time I saw the band in concert, Flashlight was actually the first song they opened with. As the lead singer, Brian, sung these words, everything felt right. While the whole song means a lot to me, this line always stuck with me the most.

Is it cheating to use the same song twice? Either way, Flashlight deserves to be listed twice. Though the entire song is amazing, this line will always be my favorite. For me, I love how it shows that while there will always be sad days, the happy days will always outweigh the sad. Just by the use and tone of Brian's voice as he says "Oh god, I'm happy", it really just shows that the good will always out weigh the bad. However, this is just my take on the line.

6. "And if you need a little sunshine you can borrow some of mine. It's okay if you're unhappy, I would say before I leave her. Just take a look around there's no one here that's happy either"

Lonely Eyes is one of The Front Bottoms' first songs, and it's probably one of the most beautiful songs. While the entire song is filled with lyrical gems, the above line will always be my favorite. The idea of light is a commonly used one in the bands music, and the idea of sunshine relates to joy, happiness, and all around good. While that's typical, the idea of lending happiness to someone is so beautiful. Well, to me at least.

7. "They say the good thing plastic flowers is you can spray them with any type of perfume"

Plastic Flowers is barely a song at this point, it's an experience. For me, I always imagine the song playing during the credit scene of a coming of age movie. The song it's self focuses around the idea of someone you love dying. My own take on the above line is taking something fake and making it to be whatever you want to be. Almost like taking memories and forming them to be however you wish. Though it can be interpreted in many ways, I love it.

8. "You're a flashlight in a dark room or the loneliest black out."

As stated earlier, The Front Bottoms have a fascination with the idea of lights. Often, the band compares people to flashlights, and when you think about it, it's a beautiful metaphor. Flashlights are objects that are used to create light, eliminating the darkness. So in other words, flashlights bring light. They rid you of the darkness in your life. The ease out the bad parts. This line, taken from Be Nice to Me is just an example of the various time the band uses the metaphor.

9. " 'Is it raining where you are?', The only thing I could think to ask, But nothing ever hurt so bad as the “no” that you said back"

The opening line of the song, West Virginia , posing the above question. The answer to the question raises a lot of debate. Many believe the 'no' is upsetting due to distance, that this shows the person is far away. However, I believe the 'no' is upsetting because it's such a bland answer. There's no thought in a simple, 'no', which causes the feeling of grimness because they were hoping for an actual response. Though, this is just my take. This is what makes a song good, when you can debate about the lyrics.

10. "You were my girl you were my baby. You were my homemade mashed potatoes, biscuits, and gravy."

This line from The Feud is one of the greatest things to come out of The Front Bottoms. Now, my best bet at actually understanding this line is that they're comparing the girl to his favorite things. For example, the next line is, "you were too good, I should have known". When putting that in perspective, it makes a lot of sense. However, I really enjoy thinking about this song out of context because it captures the true essence of The Front Bottoms.

This is just a small collection of some of the amazing work to come out of this band, if there's any lyrics that you enjoy, comment below!