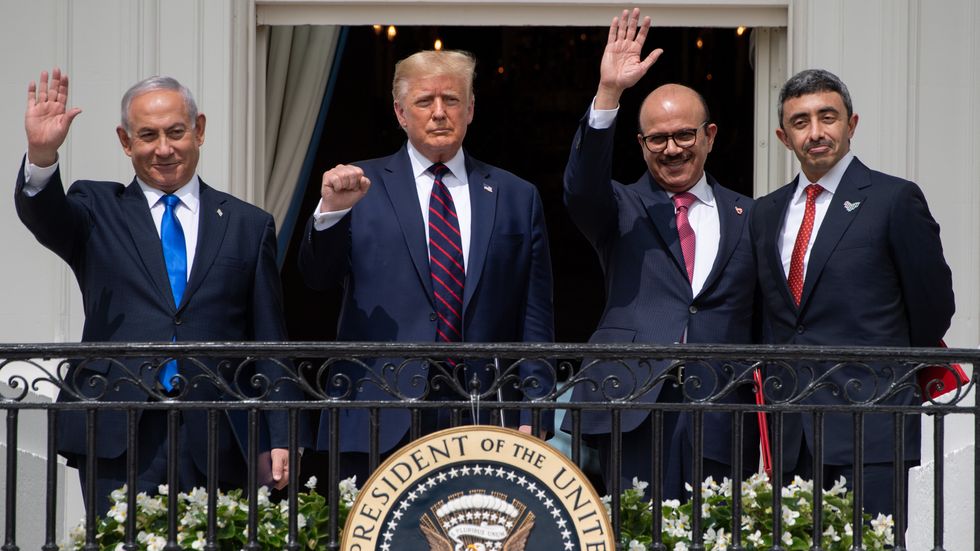 Last month, Bahrain, the United Arab Emirates and the state of Israel signed a peace treaty in Washington. Unlike other Israeli-Arab peace agreements, this one leaves more questions than answers.

The Middle-East has been a hot spot for a long time: faction wars, wars between Muslim countries, sporadic clashes and wars between Israel and its Arab neighbors.

As a volcano in ebullition, the Middle-East has had its share of the eruption of turmoil, bloodshed and destruction. To change this ongoing nightmare, it would require all the Arab countries and Israel to come to their senses for an overall regional peace accord.

But timid progress toward peace has been slowly occurring in the Middle-East. For example, history was first made on March 26, 1979 when Anwar –El Sadat of Egypt and Israeli Prime Minister Menachem Begin signed the peace agreement that ended decades of hostility.

Next was the turn of Jordan and Israel that signed a peace treaty on October 26, 1994. Adversity turned into a friendship. The leaders of both countries, President Ezer Weizman of Israel and King Hussein of Jordan, shook hands. It was historic.

Then, on September 15, 2020, two Arab states, Bahrain and the United Arab Emirates, signed a peace treaty with Israel in Washington, D.C. That agreement covered a wide range of issues, including the recognition of each other's state and bilateral consensus on a variety of things.

But the peace treaty that Bahrain and the United Arab Emirates signed last month with Israel looks like something of a political nature It leaves doubts as if it is strategically a peace accord filled with political x, y and z.

It's clear that the goal of Pres. Donald Trump and Israeli Prime Minister Benjamin Netanyahu is to make the enemies of their enemy their friends to contain Iran, a common enemy.

What the agreement does is to put Iran in a box. The United States and Israel have been in a cozy relationship to the detriment of Iran. Their strategy seems to be working with Israel now having leverage by being at Iran's doorstep.

With the peace agreement, the eventual Israeli military presence in Bahrain, the United Arab Emirates and even Saudi Arabia will not be a surprise. It looks more like strategical warfare under the disguise of peace. If it is the case, a peace agreement to strike a blow at Iran would be cheap and insignificant.

What the Middle-East truly needs is a historic peace treaty, one with Palestine and Syria at the forefront. Solving these thorny issues would be rewarding to the point of awarding the Nobel Peace Prize to the peacemakers.

Squeezed in their enclave between the Jordan River and Israel, Palestinians are doomed to live their daily lives under Israeli occupation and oppression. Their plight is somewhat marginalized, and their cries fall on deaf ears. Too bad! What's worst is that Israel has had a total usurpation of Palestine. But how about Syria?

Syria and Israel are technically at war over the Golan. Israel had seized Golan Heights from Syria during the 1967 Israeli-Arab war. If Trump and Netanyahu were peacemakers, why did they proclaim Golan Heights officially part of Israel? This is an act of belligerence and might, not peace.

For the sake of peace, why don't they return Golan Heights to the Syrians, the rightful owners? Isn't the seizure of the Golan an act of robbery? But where is the so-called peace? Preferential peacemaking with political motivations always benefits some and angers others.

Meanwhile, Arab countries have been at odds with Israel since its creation in 1948. Every peace treaty between an Arab country and Israel is a good thing. But in the case of Bahrain and the United Arab Emirates peace treaty with Israel, let's hope that their hidden political agenda against Iran fails and backfires.

Iran is Persian, Shiite and militarily powerful. Surreptitiously, either Iran already went nuclear or about to. That would be phenomenal. Above all, that would create a balance of power and put an end to the Israeli military domination in the region.

Uneasy because of Iran's military emerging power, Sunny Arab neighbors, in complicity with Israel and Trump administration, have labeled Iran as a threat, a terrorist state and a sponsor of terrorism.

On the contrary, Iran, a country committed to peace, is itself a victim of terrorism. Iranians die in Syria and elsewhere fighting terrorism. Iran also supports Hezbollah, Hamas and Houthis in their struggle against foreign occupation. Those freedom fighters are simply defending the sovereignty of their respective homelands. Is there anything wrong with that?

What's wrong is when the mechanism of a peace agreement has an objective other than what it is intended for. This way, it becomes clear that the peace itself has been tampered with, falsified and questionable.

To that effect, people are right to question themselves: in all fairness, shouldn't any serious peace mission in the Middle-East start with Palestine and Syria instead of Bahrain and the United Arab Emirates?