How To Refuse Fake News And The Journalism Blues

This Is How To Refuse Fake News And The Journalism Blues

Rhyming aside, this 'ish matters. 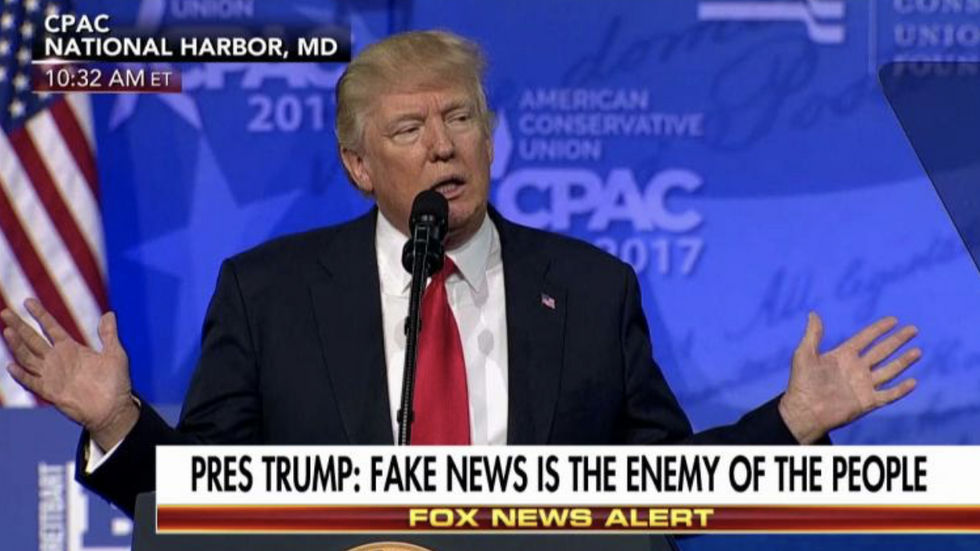 Let's throw it back to the early days: 1791. The First Amendment to the United States Constitution makes my red-blooded, American heart soar when it says, "Congress shall make no law …abridging the freedom of speech, or of the press."

For many Americans, this one measly blurb in the Bill of Rights is so patriotic that when I recite it, there is practically a bald eagle cawing in the distance with purple mountains (and majesty). The point is, we take pride in our press freedom. But the reality is, that liberty is under attack.

First off, back in the good ol' 1700s, our Framers contended that a completely free press was crucial to protect the public's advantage and to act as a check on governmental tyranny. This stems from the free press being responsible for the very idea of US independence. In the time prior to and during the American Revolution, pamphlets informed the colonists about the trespasses of the crown. The journalistic exchange of ideas was powerful enough to set the American experiment into action. Still today, it remains just as powerful. Our democracy relies on the people learning political information and making informed judgments with their civic voice and votes. This process happens through the watch-dog press.

While the importance of journalists not surprising to most, what is current and shocking is the hazard that freedom of the press faces. I mean, we all think of the current administration's disqualification of credible news outlets as "fake news" and Donald Trump's perpetual law-suit threats towards hard-working journalists. But this goes back further than that. This problem is political, but it is not quite as partisan as we may imagine. The Obama administration prosecuted an unprecedented eight "whistleblowers".

This all culminates in the disappointing results of the World Press Freedom Index. According to the brilliant Reporters Without Borders, the US ranks "number 48" for our freedom of the media! Let that simmer. America's freedom is spelled out in her most important document, yet our media is more censored than forty-seven other countries. How could this be? One argument is modernistic in essence. The more recent threat to transparency is a natural, governmental reaction to how easily accessible the media is, because of the Internet. Since most human information lies at the fingertips of citizens, the government is essentially freaking out and trying to hold onto any secrets that they can by attacking the media; this action henceforth creates a chasm of mistrust between the constituents and the communicators.

Do not fret, there exists a light at the end of the tunnel. To clarify, in this article, I was not talking about the cringe-worthy Facebook "clickbait" headlines. I would argue that these articles are not truly representative of journalism. In fact, they create an unfair cultural distaste for objective reporters. True journalism is a check, broadcasting the narratives that those people who hold public office don't want revealed. However, we, as Americans, have the right to hear all of it. While freedom of information is threatened with recent circumstances of net neutrality and the executive branch's reactionary behavior, the truth must always come first, whether it's the colonial era, 2019, or the future. To protect freedom of the press, we can support organizations like the ACLU, NPR, The New York Times, and more.

But most importantly, you, (yes - you), can encourage true journalism making a specific effort to be informed of current events. Ignorance of current events doesn't mean that they are not affecting you; it actually leads to apathy and allowance toward horrendous circumstances.