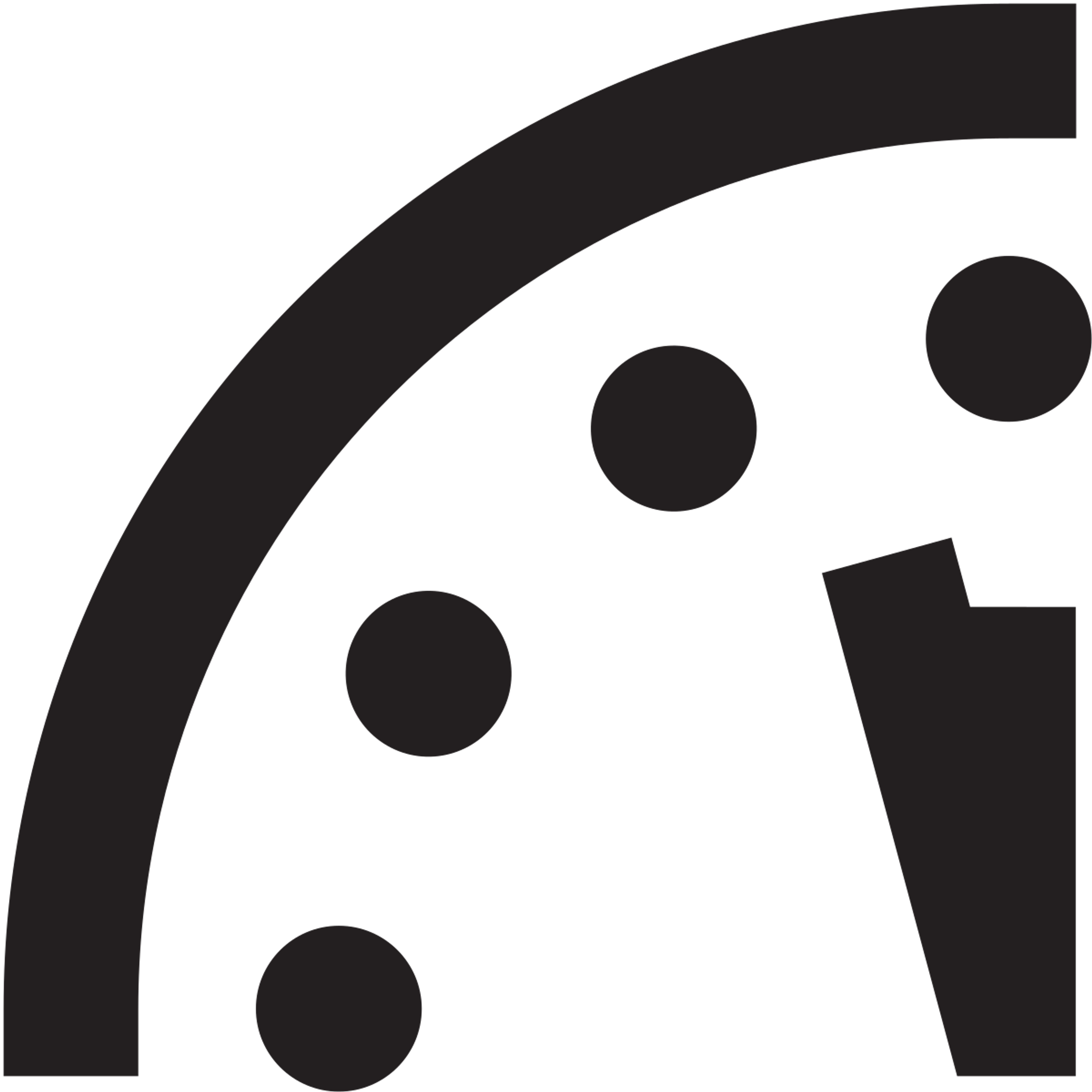 With all the craziness in the world, it would be a great help to gauge how close we are to an apocalyptic disaster. Something that would take into account multiple variables to quantify proximity to a global meltdown whether it be politics, war, resources, climate, etc.

Well, turns out we do have something that does exactly this! The Doomsday Clock has been around since 1947 and tells us how close we are to Doomsday depending on how close the time is to midnight. Scientists and experts take many factors into account and quantify their levels of threat, coming to a conclusion of many minutes should be added or deducted. Peace treaties and movements help in bringing the time further away from midnight but there is always a time where there is a huge shift back into disaster. In the words of the creators on “thebulletin” they state:

“The Doomsday Clock is an internationally recognized design that conveys how close we are to destroying our civilization with dangerous technologies of our own making. First and foremost among these are nuclear weapons, but the dangers include climate-changing technologies, emerging biotechnologies, and cyber-technology that could inflict irrevocable harm, whether by intention, miscalculation, or by accident, to our way of life and to the planet.”

This isn’t just some conspiracy guy on the internet who wanted to scare people. This is heavily supported work with dozens of published and awarded nuclear physicists, biologists, economists, energy experts, and professors of several disciplines teaching at highly esteemed universities. Time Magazine, The New York Times, Washington Post, and Huffington Post are just a few of many publishers who cite the Doomsday Clock, further supporting its credibility. Good to know that these minds are making the effort to inform us how close we are to a disaster.

I was very interested to see what points in history have been labeled as points of such cataclysmic disaster that they could be labeled as globally disastrous. So I searched the Doomsday Clock online and started from the bottom to see the times we were closest to disaster.

Times when minutes were added to be closer to midnight include 1949 when the Soviet Union tests its first atomic bomb which started the nuclear arms race, 1968 when America’s involvement in the Vietnam War intensified, and 1998 when India and Pakistan both test nuclear weapons in a form of petty aggression. There were also occurrences when minutes were deducted because of peace treaties, alliances, and/or movements. Some include the fall of the Berlin in 1990, the signing of the Nuclear Non-Proliferation Treaty in 1969, and the cooperation of the United States with the Soviet Union when both nations realized the dangers of the nuclear weapons and collaborated to avoid confrontation.

From my observations, most of the fears of Doomsday come from nuclear warfare. It does make sense as nuclear weapons threaten not only human lives and mass war, but also affect the ozone layer and life itself. It truly has the most devastating effects in all sides of the spectrum. What shocked me the most, however, was not that nuclear warfare was the biggest deciding factor of the world heading towards an apocalypse, but the times when we have been closest to midnight.

While some of these were there, the time that we have been the closest to midnight was none other than the day that Donald Trump won the 2017 election. We are 2.5 minutes away from what is Doomsday, the closest we have ever been since 1953 when the United States tested its first thermonuclear device as part of Operation Ivy before the Soviet Union followed.

I was surprised to see that the closest time to disaster was so recent but the more I kept thinking about it, the more it made sense. Trump is an aggressively-minded individual who has access to the nuclear codes but more than that, he nor his cabinet are in disbelief that climate change is real. He spurred nationalism, leading to the exposure of racism and misogyny in what many claim to be the greatest country in the world.

Rather than being scared, the Doomsday Clock is a valuable resource to open our eyes and compare different disasters in history to show where we are as a civilization. Nuclear warfare and climate change truly are the biggest threats to our existence but diplomacy, politics, and energy all start small before leading to something disastrous.

What we can do is stay educated about what surrounds us and be aware of global occurrences, not just what happens in our own country but the world. There are several organizations that fight for climate change awareness, and from the simplest actions such as controlling how much water we use in the morning to spreading greenery, we are making small steps to combat resource depletion. Educating others and offering your own efforts to keep a clean and green community will lead to strides that lead to true change.

The race to stop the clock starts with us.