Multimillion-dollar toy manufacturing company Mattel has just revealed three new body types for Barbies. Sure, it may just be a doll, but why is this so important? 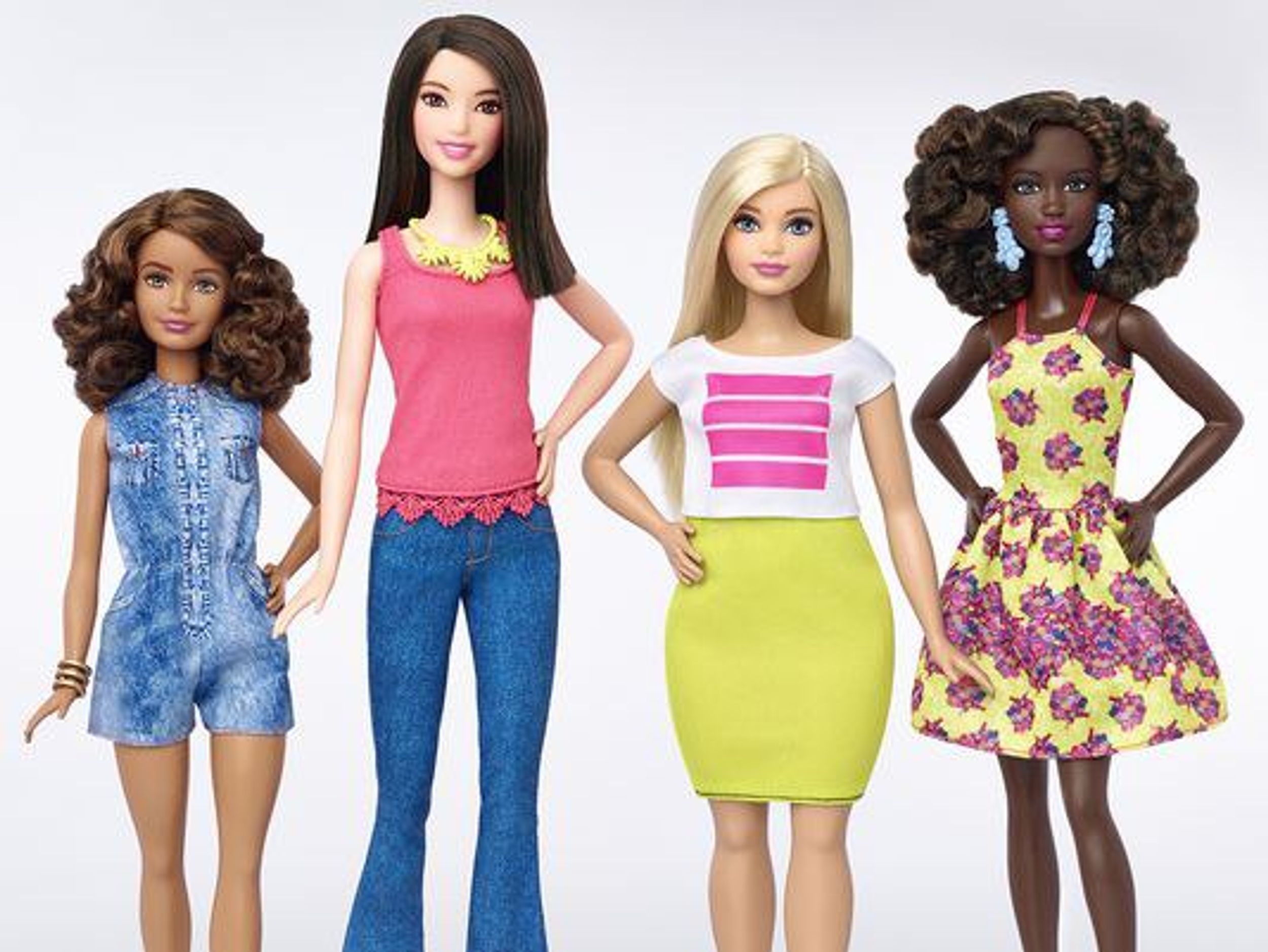 Just when we thought we couldn't take another article about the tragic bombing of a city across the planet or a group of men trying to take away our birth control, a glimmer of light appeared in the form of a hopeful headline: "Barbie Adds Curvy and Tall to Body Shapes." The piece in the New York Times written by Rachel Abrams describes Mattel's revolutionary change to the types of Barbie dolls they produce. Dolls will be sold with various skin tones, eye colors, and hairstyles.

Even more significant is the change they'll be making to the dolls' body shapes, since the company has always received criticism for perpetuating unrealistic body types. Now, in addition to the traditional Barbie that lacked variation, the dolls will be sold with an option of body types: petite, tall, and curvy. This sounds incredible, and so many people are celebrating the new changes, but what is it about this new diverse selection of Barbie dolls that's so amazing? Why does this matter?

Because now Barbie dolls hold a great power: representation. This can be tricky for a lot of us to appreciate, but being represented through popular toys and mass media, it can be life-changing. When I was a little girl, I was represented everywhere I looked. I was a modern-day Shirley Temple: white, thin, and blonde. I watched Disney's "Cinderella" and saw myself as a princess, I saw girls that looked just like me on magazine covers and cereal boxes, and my Barbie dolls reflected how I hoped to look one day.

It wasn't just a matter of recognizing my curls and pale complexion; it was recognizing the countless possibilities of the person I could become when I was older. Psychologically, this sense of future self is a critical idea for a child to develop. It gives them motivation, hope, and a sense of worth, all of which children start to develop as young as two or three.

But all the while as I dreamt the days away, thinking of how I could be a doctor or a singer one day, just like Barbie, millions of little girls had a different experience. For a child who was non-white, overweight, or just different-looking from the Barbie dolls on the shelves of Toys R Us, they didn't see themselves when they played.

This may seem silly because of course these children still enjoyed their toys, movies, and magazines, but this lack of representation sets up an unconscious divide in society. One which celebrates whiteness, blonde hair, and slim figures as superior. If a child never sees someone like them in the media or on their toys being depicted as beautiful or smart or talented, then how're they supposed to develop a healthy sense of self?

Of course we've made great strides as a society, Disney and many branches of media are starting to embrace body positivity and normalize people of color. We have to remember that being a diverse society is what's normal. Walk two blocks down a sidewalk in midtown Manhattan, and everyone you see is not going to be white, skinny, and blonde. So why should we represent our society as such through toys, movies, and magazines?

The very simple act of a child seeing a superhero or a princess or a scientist on the TV and thinking, "They look like me!" will make a world of a difference to a child's sense of self. Mattel is taking a step in the right direction, and it's important for us as a people to celebrate this new representation, and comprehend its importance.