My sisters and take-a-dates are great, but it's our philanthropy that changes the world. 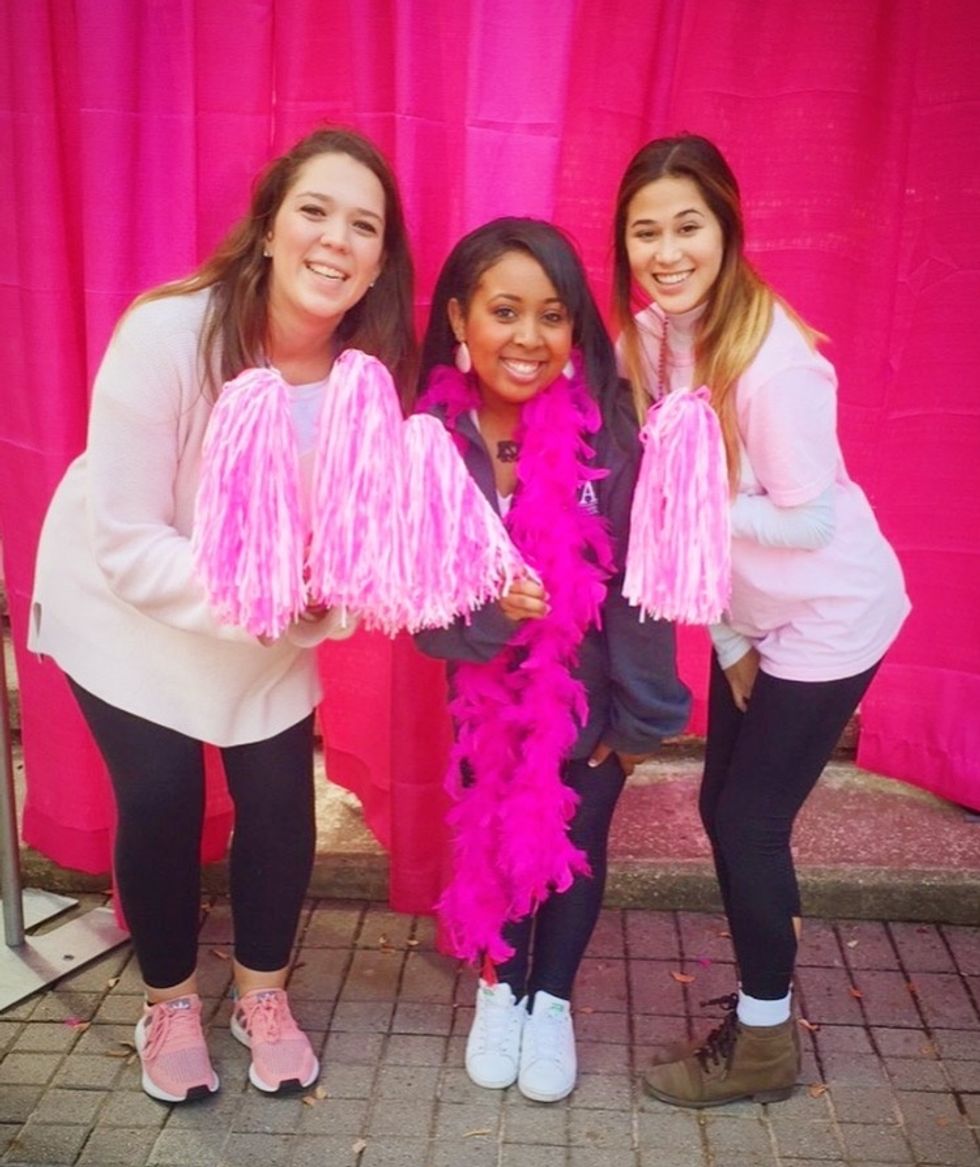 Imagine it's a typical day at Baylor University. You're sitting in a big lecture hall, jotting notes down for your upcoming examination. It's a course of all women, and you've gotten pretty close to many of your peers in the class. Suddenly, your professor asks you to break off into groups of eight. As you settle into your new section, it dawns on you that one friend in your group will develop breast cancer in her life.

It's so easy to ignore the statistics. We're young and in college, and we're often encouraged to "live in the moment" and "not fret the small stuff." For some people, splitting off into a group of eight means becoming nervous because group projects suck, or even feeling relief because more people often equals less responsibility. But to members of Zeta Tau Alpha, a group of eight is a reminder that more than 200,000 women will be diagnosed with breast cancer this year. That could mean one of your friends, one of your family members, or even yourself.

I never even imagined myself being in a sorority, at first. I had so many hesitations, and I was suspicious that going through formal recruitment was simply a way of paying for friends. Thankfully, Baylor has spring recruitment, and it wasn't until October of my freshman year that I knew that rushing was a way of joining something bigger than myself. I was invited to Zeta Tau Alpha's Big Man on Campus event, which was a male pageant show that raised money for Breast Cancer Awareness and Education. When I entered Waco Hall that night, I was taken aback by how my eyes could not stop seeing pink.

I sat in the crowd, watching the Zetas' upbeat energy as they danced and cheered for the contestants; they were literally glowing pink because of their successful effort in raising money for their philanthropy. Their passion for their cause made me want to be part of an organization which had such genuine care for fighting an illness which impacts so many. ZTA's philanthropy made me want to join a sorority in general, and it made me the happiest girl in the world to receive a bid from ZTA that January.

Since I've been a member of Zeta Tau Alpha for almost two years now, I've seen how hard my sisters are working to make 1 in 8 none in 8. Just last year, we raised over $50,000, all of which went directly to Breast Cancer Awareness and Education. Events like Big Man on Campus, Pie a President, Pink Picnic, Bright Pink workshops, and Think Pink week are just a few of the numerous ways we are attempting to make a difference in this world. ZTA wants everyone to have access to resources that help them become educated in order to prevent the progression of breast cancer.

I love my sisters. I love our friendships, our take-a-dates, our traditions, and our memories. But I have a PASSION for our philanthropy. My aunt passed away last summer due to a lengthy battle with breast cancer, so being a Zeta is more to my family and me than wearing the letters across my chest and "buying friends." To my sisters and I, being a Zeta means bleeding pink every day to bring awareness to our campus and beyond.

If you're reading this, you probably know someone who has been affected by breast cancer. But this shouldn't be the case. We should read the words "breast cancer" and not feel any type of sadness or pain or suffering. We should hear "breast cancer" and feel victorious because we finally did it. That's ZTA's goal. We want thousands of courageous women to stop bleeding feelings of suffering, so for them, we bleed pink.

Baylor students can help us in our efforts of making 1 in 8 become none in 8 by coming to Think Pink week October 1st through 5th at the Student Union Building Den. Don't forget to attend the fun-filled annual Big Man on Campus event on October 5th from 7-9 p.m., or donate here to help us reach our goal of $20,000.

The next time you're sitting in class, look at the row in front of you and the people beside you. Let's pray that one day, we won't have to worry about our groupmates being affected in the future by this terrible disease. I love my sorority's philanthropy because it brings awareness and contributes to finding a cure. This October, don't look at the pink ribbon and think donating a few dollars won't help. Stand with Zeta Tau Alpha and help make a difference.

Related Articles Around the Web
sororities
Report this Content
This article has not been reviewed by Odyssey HQ and solely reflects the ideas and opinions of the creator.