It is an insult to compare chamberlain to trump
Odyssey

It is an insult to compare chamberlain to trump 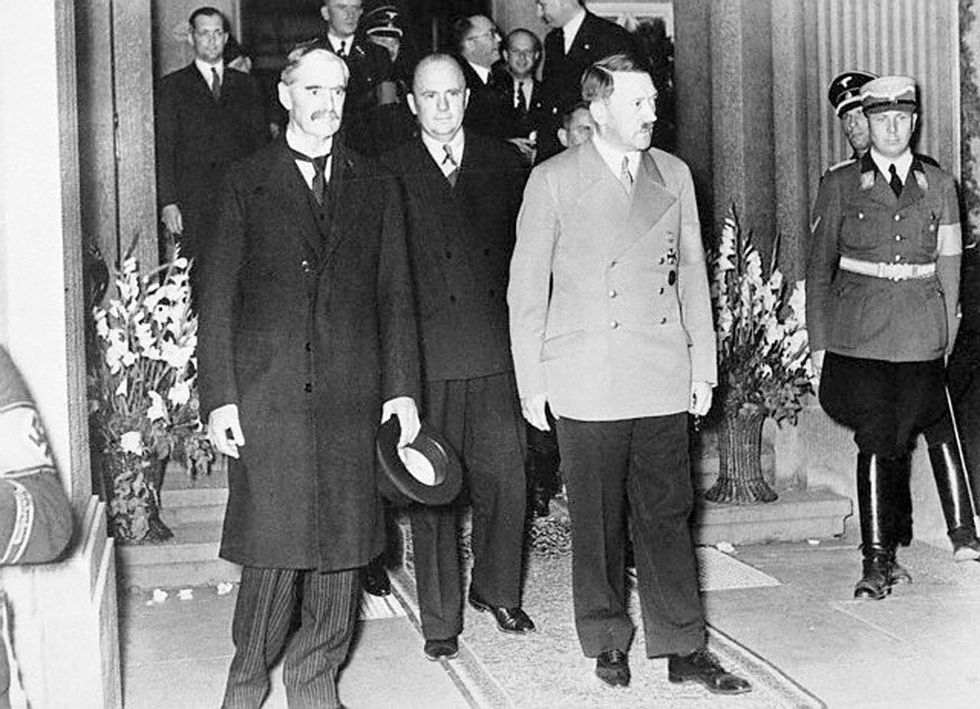 When President Trump declared that North Korea is no longer a nuclear threat and tell us to sleep well tonight, his words share resemblance to Chamberlain's.

"I believe it is peace for our time. We thank you from the bottom of our hearts. Go home and get a nice quiet sleep." Chamberlain said after he came back from Munich in 1938. With this resemblance in view, clearly we can see that both Trump and Chamberlain appeased to dictators.

We all know that appeasement, the act of conceding demands to dictators, is a no go. As we can see from Chamberlain and maybe Trump, it is ineffective.

And from its ineffectiveness, the authoritarian country (ex: Nazi Germany and North Korea) emerges stronger. But, while both men may seem to share similarities, they couldn't be more different. While we all joke about Chamberlain being some kind of buffoon for appeasing to Hitler, he had the right intention: to avoid getting his country into another war immediately after the hell that is "War to End All Wars." Gas attacks, slippery trenches, massive bombing campaigns---WWI changed warfare, and it certainly changed Britain so much so that the people are even anxious into going to war. With this anxiety going around, Chamberlain had to appease. Trump, meanwhile, appeased because he thought he will look good. You have to remember that he was suffering from massive unpopularity with both the media and the general public alike; and that unpopularity stems from his domestic troubles. And so, Trump had to get a "win" somehow even if that win is a stupid version of Nixon goes to China. So, since we've established the differences, we can all agree on one thing: Chamberlain cares about his country, but Trump does not.

When Chamberlain appeased to Hitler, he had war anxiety in mind. As said before, Britain was still relishing the memories of World War I. Chamberlain, in fact, even mentioned that weary mothers even wrote to him to not send their sons to war: "it has been heartbreaking to read of the growing anxiety they reveal and their intense relief when they thought, too soon, that the danger of war was past." Since everyone was so concerned, Chamberlain had a heavy burden and observed appeasement as a responsibility. So, when he appeased to Hitler, Chamberlain thought to avert a worst case scenario. And everyone, of course, celebrated the news. So, even if Munich Agreement went haywire, Chamberlain thoughtfully coordinated it.

President Trump, however, only went to the Singapore Summit for one thing: himself. Max Fisher from the New York Times noted that President Trump immediately accepted it right away without any input from the State Department or any low-level officials whatsoever. And so, we can all conclude that the only person who gets to have a say in this administration is Trump; everyone else are just yes men. But, with this conclusion in mind, we can also see that Trump is impulsive. That is a problem. He doesn't have his country in mind. He only has himself in mind which is why he agreed to do the summit. It makes him look good and it is apparently working while the media gawks at the historicity of the summit.

As we can see, while Donald Trump and Neville Chamberlain may seem similar, they actually share more differences. Chamberlain appeased with his country in mind; Donald Trump did so with only himself in mind. To compare Chamberlain to Trump is to normalize the latter as a state-leader who has something rational in mind and make the former look even more stupider when he is anything but. If you want to compare a figure to Chamberlain, then I suggest for you to compare him with President Moon.