MVP Capital of the World: Giannis' Win is the Latest Cherry On Top

MVP Capital of the World: Giannis' Win is the Latest Cherry On Top 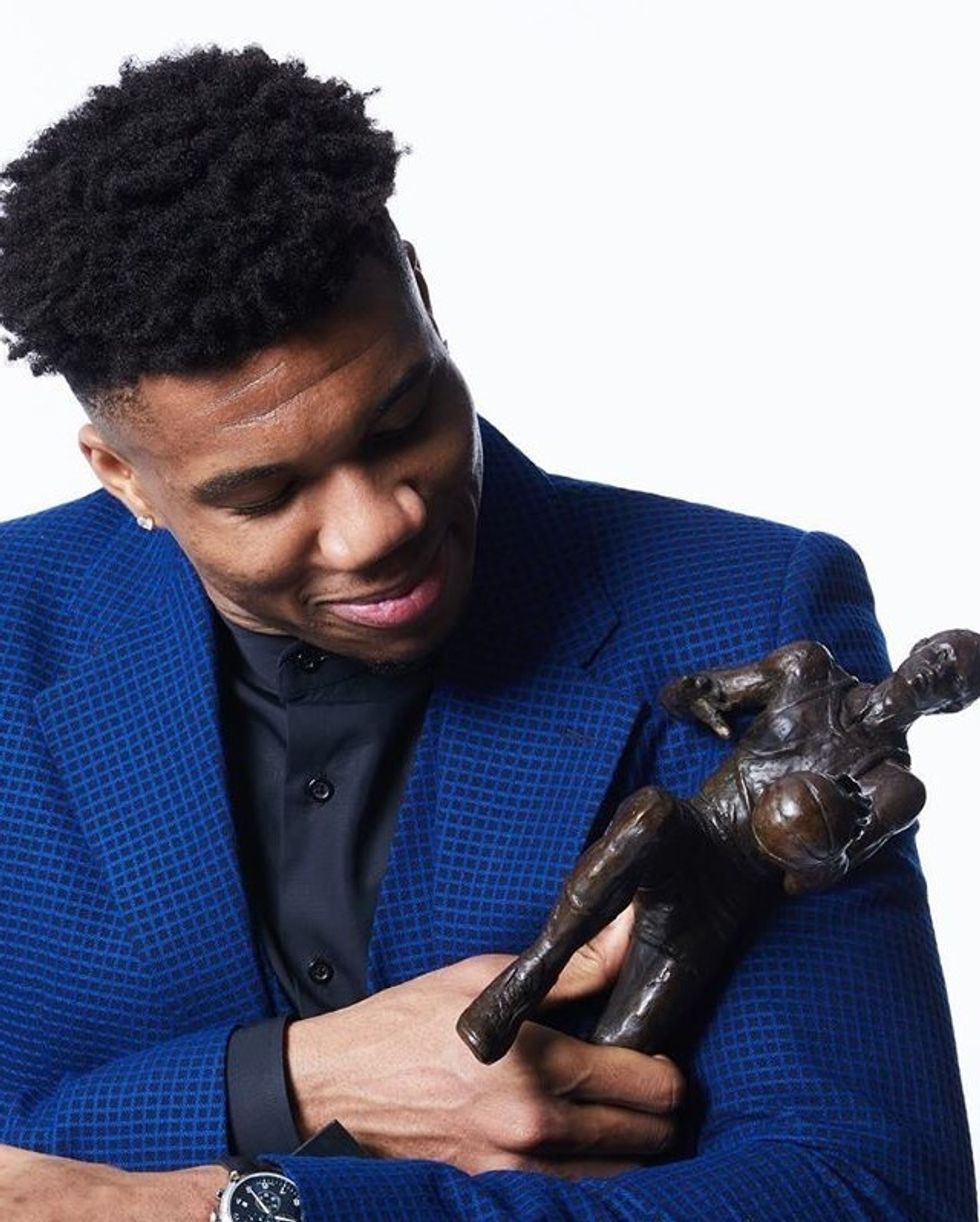 When the standard-bearers of the Milwaukee Bucks departed the 2019 NBA Awards, they took home a trifecta that vaulted them into unprecedented company.

Yet another MVP is coming home to Milwaukee.

It was hardly a surprise, given Antetokounmpo's impressive play on both ends of the court. He averaged 27.7 points per game, 12.5 rebounds, 5.9 assists, 1.5 blocks, and 1.3 steals. Perhaps most impressive was the team's improvement, as the Bucks went from 44-38 to 60-22, the best record in the league.

The rise of Giannis has almost perfectly correlated with the success of Milwaukee.

The statistics will bear out that Antetokounmpo is in good company as an MVP winner in Wisconsin. As USA Today points out, despite Wisconsin's comparably small size (both overall and in terms of major media markets) it is among the leaders in producing pro sports MVPs. By some metrics, it's even the best.

If you allow for the combined force of the Green Bay and Milwaukee markets (a necessity given their cultural closeness, despite almost 120 miles of roadway separating the cities) Wisconsin has won 18 MVPs since 1957, the first year that all four major North American professional sports leagues began distributing said award. And that's all with only three teams in the entire state: the Packers, Brewers, and Bucks. None of those, mind you, are members of the NHL. The absence entirely of one of the four major leagues makes Wisconsin's accomplishments that much more impressive.

When compared against other markets, only the San Francisco Bay Area has more gross MVPs than all of Wisconsin in the last 25 years. But, mind you, the Bay Area is many times more populous than Milwaukee-Green Bay (approximately 7.15 million people to 1.87 million), and, perhaps most importantly, is home to six pro sports teams (Raiders, 49ers, Warriors, Athletics, Giants, and Sharks).

As a result, if you average the number of MVPs won over the last 25 years per team, Wisconsin does in fact come out on top, with 2.7 MVPs per team, compared to 2.0 for the Bay Area.

What's more, if you look to see which market/metro area is the fastest to win an MVP in football, basketball, and baseball, you'll see it's Wisconsin again. From Aaron Rodgers' latest NFL MVP win in 2014 to Antetokounmpo's in 2019, it took only six years for the Dairyland to claim individual dominance among the major leagues. This beats a record previously won by the (again much larger and more populous) New York market of winning all such MVPs in a seven-year window between 1970 and 1976.

All of which is to say that the state of professional sports is a good one in Wisconsin.

Except, the state hasn't seen an actual championship since Super Bowl XLV following the 2010-2011 NFL season.

As I stated in a previous article, eight years of consternation is not without lack of trying. All three of Wisconsin's major teams have been to championship-qualifying games in their respective leagues in the interlude since that Super Bowl victory. They've just lost every single time.

This disparity was not forgotten by Antetokounmpo when he gave his acceptance speech. Thanking most everyone in his life from his mother to his native Greece and Nigeria, he fought tears throughout before finishing with a renewed promise of championship.

Considering that no Larry O'Brien Trophy has rested in Milwaukee since 1971 (when it was then known as the Walter A. Brown Trophy), Antetokounmpo's desire is far, far from greedy.

And even now the stars may be aligning for another deep playoff push from the Milwaukee Bucks next season, with all key contributors minus Malcolm Brogdon expected back next year. While the frenzy of free agency remakes the NBA around Milwaukee, the Bucks seem to have decided that staying the course will be far more advantageous than importing any number of talented but volatile personalities.

Which brings us back to that trifecta: Horst, Budenholzer, and of course Antetokounmpo. All three have been doubted and kicked around the league. But all three have also found immense success within one another. If the awards they received mean anything it is above all else this: they are still hungry, and the rest of the NBA should be ready.

giannis
Report this Content
This article has not been reviewed by Odyssey HQ and solely reflects the ideas and opinions of the creator.