Why You Should Say "No" To Meghan Trainor

Why You Should Say "No" To Meghan Trainor

Think twice before calling her a role model. 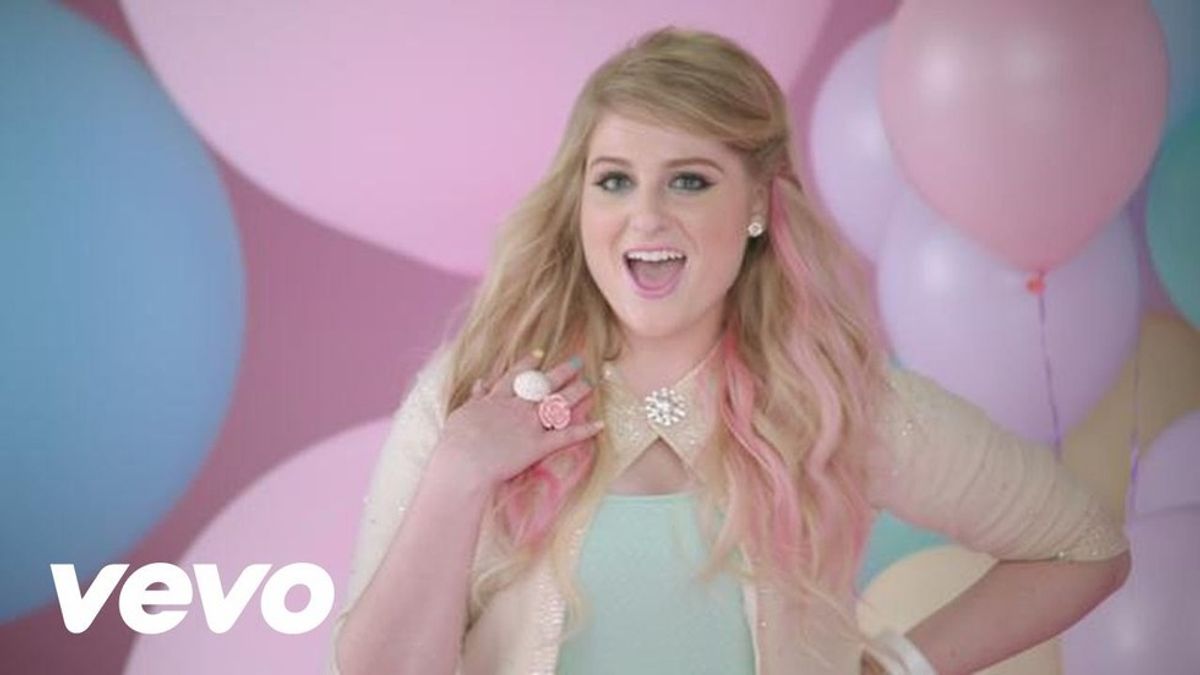 When Meghan Trainor emerged into the spotlight in 2014, it seemed like everyone was a fan. Her songs like “All About That Bass” and “Dear Future Husband” were catchy, and I’ll admit, I thought they were pretty good. It seemed like her purpose was to promote a positive body image and sense of self-worth in young women, but when you look closer at her lyrics, she’s actually doing the opposite. Meghan Trainor is ultimately being praised for skinny shaming and telling girls that men only like a certain body type, as well as implying that we should make our goals to live up to men’s expectations. It’s sending a terrible message to young women, and we need to stop glorifying her.

Her song “All About That Bass” has several offensive lyrics, such as:

“Boys like a little more booty to hold at night”

“You know I won’t be no stick figure, silicon Barbie doll”

The first thing about this song that I want to bring attention to is the fact that she’s telling young girls that men like a certain body type, and that they should be striving to meet their expectations (which seems to be a recurring theme in her songs). By saying that it’s better to have the curvy body type that men “prefer,” she’s telling skinny girls that they aren’t as desirable, which completely defeats the purpose of making girls feel better about themselves. Not only is she telling her fans that a man’s opinion of her body determines her self-worth; she’s also promoting the idea that body positivity only works one way. What kind of message is she trying to send here? Because it’s definitely not giving skinnier girls a very positive body image.

With that being said, calling out “skinny bitches” is definitely not promoting self-love or a positive body image. Her lyrics claim that there’s something wrong with being skinny that makes smaller girls inferior to girls with curves, and that they should feel bad about themselves for not looking like them. While I’m sure her intention was to use this song to make girls feel confident, it only applies to certain girls- she’s putting others down in the process, therefore defeating the purpose by telling girls that being a size two isn’t okay (which it totally is- and so is being literally any other size). I praise her for her attempt at promoting body positivity, but it doesn’t count if you’re saying that only one body type is beautiful. Meghan is making it very hard to live in a society where women should be supporting each other when she’s telling them that some of them aren’t as good as others.

The feminist in me also wants to point out that the lyrics in her song “Dear Future Husband” are also extremely offensive and degrading to all women. Take these lyrics for example:

“Cause if you treat me right, I’ll be the perfect wife, buying groceries, buy-buying what you need”

Implying that the “perfect wife” means going out and buying what your man needs is setting women way back- this isn’t the 1950s, and men can do things for themselves. A wife has much more of a purpose than just tending to all of her husband’s needs, but Meghan is telling her fans that that’s the way to keep a man (newsflash: it isn’t). When she says “After every fight, just apologize, and maybe then I’ll let you try and rock my body right,” it’s just one of the many times she uses sex as a form of control and empowerment, which is, once again, a terrible message to send to impressionable minds.

Promoting self-love shouldn’t be specific to one body type and putting down others, and empowerment doesn’t come from sex or meeting men’s expectations. Self-love means promoting empowerment in all women, regardless of their shape and size, and by teaching women that they don’t have to live up to any standards except their own. So, try again, Meghan.