Why Changing Your Major in College is Completely OK

Why Changing Your Major in College is Completely OK 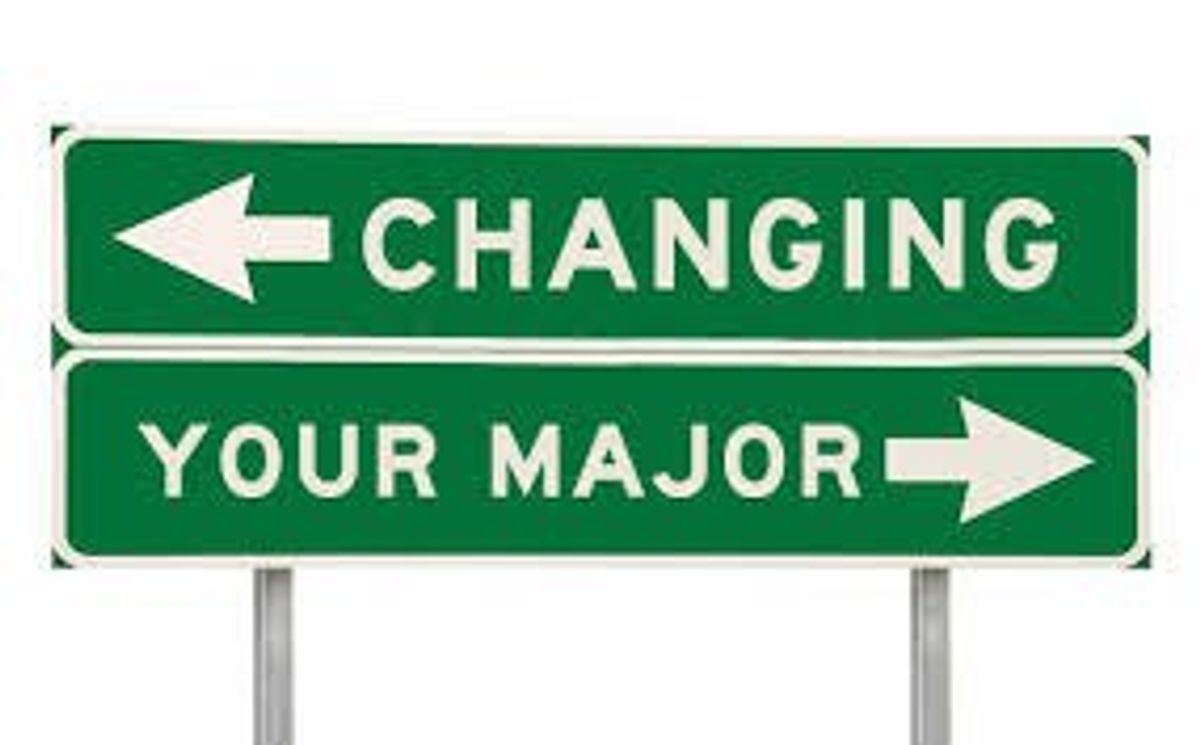 When we are growing up, we have the dreams of being doctors, veterinarians, lawyers, astronauts, or teachers. When we get older, we feel the pressure of reality setting in, realizing it isn’t as easy as we thought it was to be what we want. In sixth grade I was asked what I wanted to be when I grew up. I responded that I wanted to be a lawyer. A few years later, I realized I wanted to be a doctor, specifically an obstetrician. With hard work and dedication, I got through high school with fantastic grades, graduated with a 3.6 GPA, and accepted into the six out of eight colleges I applied to. I decided to go to Alvernia University and major in their biology/pre-medical program.

I was the typical freshman, scared and nervous that I wouldn’t do well in college because every time I told someone my major, they would smirk in disgust and say “good luck with that.” My first week of classes, I had a general chemistry course. When I came in for my second class, she didn’t show up. My new friend and I looked at each other and asked what the rule was, “do we stay fifteen minutes? Do we stay twenty minutes?” We waited until someone else got up to leave and then decided to leave. We had another class together later that day, BIO 103. Our professor in that class told us that our gen. chem professor had never showed up because she had unexpectedly passed away. We were shocked. Of course Alvernia had a quick replacement for her position. I was a bit skeptical at first about him, but I later found my emotions to be correct. No one liked him and he made my freshman year in chemistry hard and miserable. I was scared that I wouldn’t pass the class. This was my first point on my rocky journey through the biology program at AU. Luckily, I passed the course and I was pleased.

My next rock was zoology. Oh zoology…how I still cannot stand to stomach the thought of taking it. I barely made it through the course. I felt as if I was drowning in work, projects, and studying for massive tests all the time. I passed my freshman year and said goodbye to my rocky adventure.

I felt accomplished and strong that I made it through my first year as a biology student. I came back for my sophomore year confident and ready to take on organic chemistry. I had heard many rumors about orgo, but I didn’t let them get to me. My first class, I was already scared. With a professor who was hard to pay attention to, and material that didn’t make sense, I was already worrying about how the rest of the semester would turn out. As the course went on, I was starting to struggle. After a couple quizzes, many homework assignments, and a test, I realized I was in too deep and I had to leave the course. For the first time, I actually started to doubt my decision in being a biology student. I spoke with my professor, my mother, and my friends to see what would be good for me. With a 41% in the course, I immediately decided to withdraw. I was heartbroken because I knew that without organic, I couldn’t get my degree or become a doctor.

I knew I had to change my major, and fast. I put in a lot of time researching new career paths, speaking with my loved ones, and seeing what would better suite me. My best friend, Harlee, was in the healthcare science program at Alvernia, and I knew how passionate she was about it. I also knew that she started college as a biochemistry major, and switched at about the same time I was going to be switching. I spoke with the advisor of the HCS program and I knew right at that moment that I wanted to switch to healthcare science. I did my research and found a new career path that will end up being better for me in the long run. I registered for HCS 200 in the spring, and was excited. As I went through the course, I fell more and more in love with it, and it definitely made me happier than what I was in biology.

Instead of the obstetrics path, I have now decided to be a surgical technologist. This career still works for me because I will still be in the medical field, and I have the opportunity to take a specialty in obstetrics still. I also believe this is a great career path for me because some hospitals are willing to pay to send you back to school so you can become a higher up position with more knowledge. So I still have the chance to be what I originally wanted.

It is important to remember that you should never have to struggle, and just because you had a dream at one point, it doesn’t mean that you’ll never be able to get there. I didn’t want to change my major because I knew what I wanted to do in life, but I knew I was having too much trouble getting there. Changing my major has made me a completely happier person and has made my college education experience a lot easier and more enjoyable.