What Warped Tour Taught Me About The Importance Of Self-Care

What Warped Tour Taught Me About The Importance Of Self-Care

Things like passion, music, and hope are things that don’t go away when you’re 16. 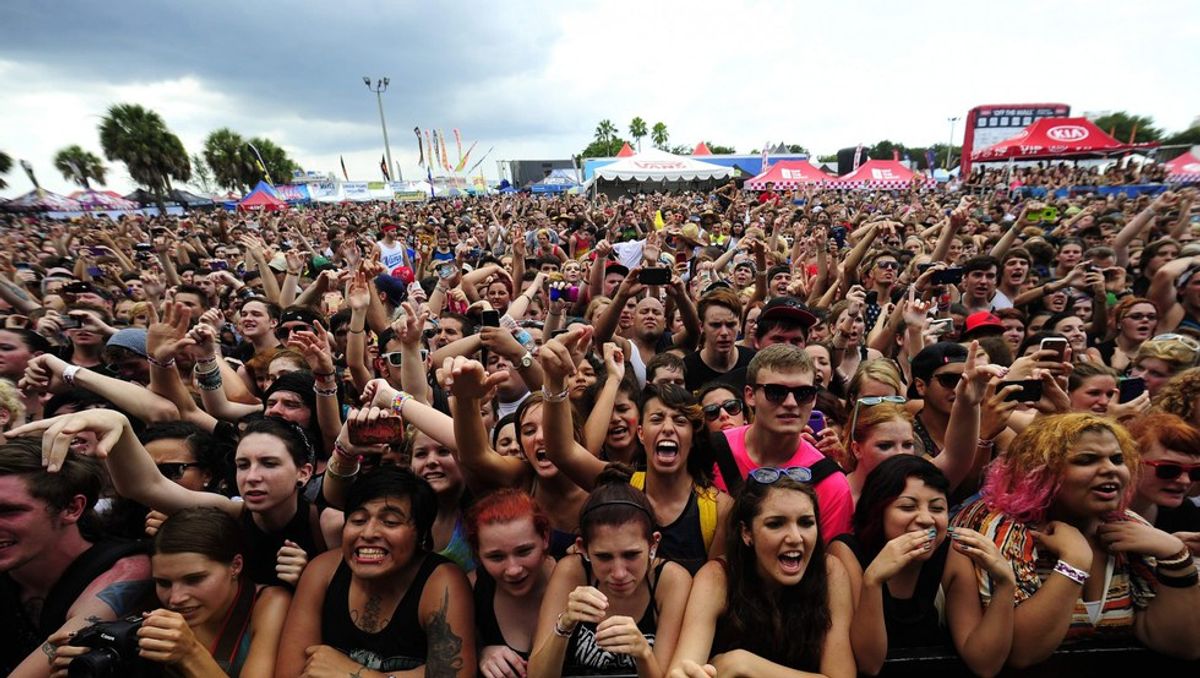 I’m not one for sweating, sunburn, or outdoors in general, but despite this I ended up attending Warped Tour this past Saturday. Warped Tour in a nutshell is every alternative music fan’s paradise. It’s where all the esteemed pop punk bands come and play in one festival from morning to night. Back in its day, it was where a lot of original bands of the genre played, like Green Day and Blink-182. Nowadays, it’s still home to some of the classics, like Yellowcard and Sum 41, as well as showcasing the up-and-comers like Real Friends and State Champs.

This festival had been hyped up to me over the years, but I still wasn’t quite sure what to expect. I certainly wasn’t expecting to walk into a venue so big for one. The stop of the tour I had gone to was in Tinley Park, one of the biggest, and maybe even the biggest, show of the tour. It honestly was like a nostalgic wonderland. I was surrounded by people, brands, and musicians who helped me go through some tough times in high school and even college.

Everywhere you looked was an opportunity for acceptance. There were band merchandise tents, food trucks and counters, local artists and organizations, charities that were founded by band members or associated with them. There was a thriving sense of community as soon as you rushed through the doors. So many young people excited to bond with strangers who were all there for the same love of music.

What I loved most was this accepting sense of community. There were tons of people and at times could be overwhelming when just trying to walk through the venue, but at the heart of it it was kind of remarkable to feel open in such a crowded space. There were so many opportunities for engagement that were available, but without the feeling of being forced to or imposed on to the point of uncomfortableness. Whether with seeing performers on the stage, meeting them after their sets, or bonding unexpectedly with other fans, there were always options to talk and bond if you wanted to take up on them.

It made me really happy to be present in such a place when we're at such a time where things in our world don’t feel so safe or certain. With the subject of politics being a highly tested one as well as the presence of national and international crisis and violence occurring day to day, it’s easy to lose hope of who you are and where you’re going. What I think makes something like this so important is what these musicians were willing to provide to their fans so earnestly.

It didn’t matter how hard their music was or intimidating they could appear. All of these musicians were about promoting positivity and that things can get better while also acknowledging that it’s okay to feel depressed, anxious, or worried. There are a lot of problems with our world, and ourselves, but that doesn’t mean we give up. We can and do have the power to move forward. Sometimes we just need reminding of that.

What really brought this message home for me was a booth that was set up with the message, “It’s OK not to be OK." The tent was with a charity called Hope for the Day, a Chicago based charity that was friends with one of the bands I saw, Real Friends. A spokesperson from the charity came up to speak about it, and along with the head of Real Friends before they performed. They both expressed the importance of staying true to you, no matter what’s going on in the world.

Their message stuck in my head throughout the day and as I sung the lyrics of Real Friends songs that I used to turn to in times of frustration, I felt the same relief back then as I did in this moment now which made me realize something. You don’t escape problems when you’re no longer an angsty teen. You just get thrown into new ones and are expected to be older and wiser in handling them more diligently.

But as I stood there I was able to reflect not only on my younger, frustrated self, but the stressed out and tired adult I’m currently working on figuring out. It was nice to be reminded that things like passion, music, and hope are things that don’t go away when you’re 16. They’re still there; it just requires you to be a little more open than you used to be.

If there’s anything I took away most from Warped Tour, it’s that you can be reminded of your younger self, reexamine your present circumstances, and still have the opportunity to forgive yourself even as you get older. Feeling like you’re different or don’t matter doesn’t go away when you’re younger and is harder to be sure of as you get older.

Fear will always be in the way, but that shouldn’t prevent the act of doing extraordinary things. For some, that’s crowdsurfing even though you’re terrified of falling and splitting your skull open. For others, it’s standing in the very front row for your favorite band even though you’re afraid of claustrophobia. And for some, it’s even finding the courage to get up in the morning and go out the door willing to take whatever life is gonna throw at you next.

If anyone has a passion and an outlet to express that, then do it! Whether it’s a panel or a ComicCon or a live comedy special, if you have the opportunity to explore that love even more you will be able to walk away being better off feeling enlightened from that experience.

It takes courage to be vulnerable, to love, and most importantly to live. Thank you, Warped Tour and all of the musicians, crew, and volunteers involved, for reminding me of these important lessons.