Here's insight into all the topics, questions, and yes, even the fly. 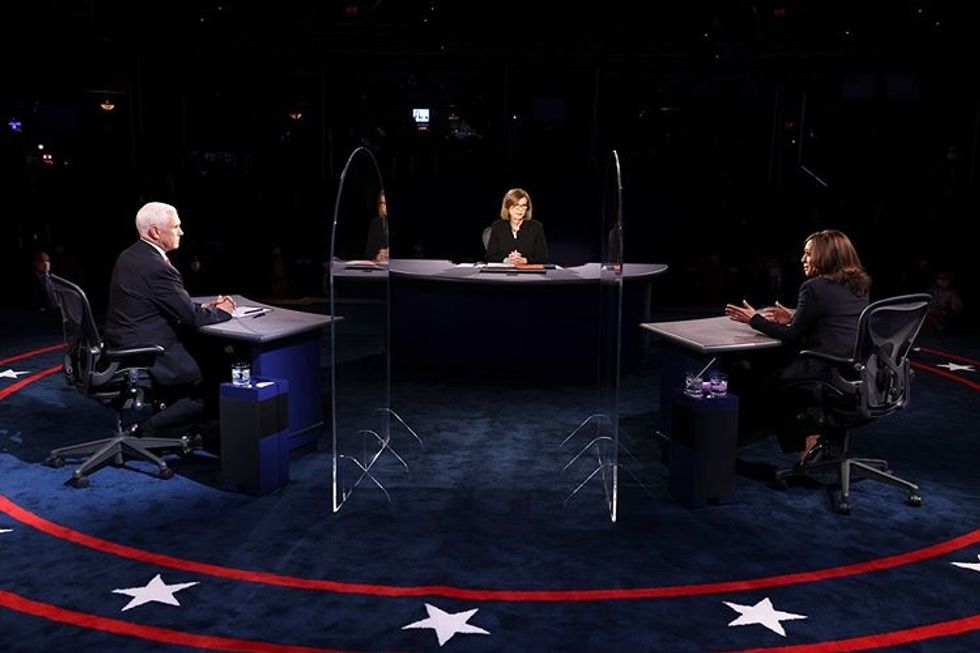 The vice-presidential debate was the other night on October 7. Biden's running mate, Kamala Harris, debated the current Vice President Mike Pence. Kamala Harris is a current senator in California. This debate was less hectic than the first Presidential debate for sure. The debaters argued less, however, they still talked over the moderator a lot and made remarks at each other that were not the kindest.

The topics were very similar to the Presidential debate. The most memorable part of the night though would be the fly that landed on Mike Pence's head and stayed for several minutes. It especially stood out on Pence's very white hair.

Susan Page, the moderator, then faced Pence with a similar question. She asked him, as the head of the coronavirus task force, why the death poll in the United States was much higher than that of other wealthy countries. Pence replied by saying that Trump and the administration have always put the American people first and care about them and their health. Vice President Pence also said that Donald Trump did things that no president had done before, such as suspending travel from China.

After this, both Harris and Pence tried to argue and started talking over Page just to get their points across. Pence also said that over 200,000 more lives could have been lost if they had not done what had been done.

Page continued with her questions and asked Mike Pence how he and other politicians expected Americans to follow safety guidelines if politicians were not also following the guidelines put forward. Pence replied with saying that he and President Trump had great faith in the American people and explained how politicians have been taking precautions, such as having events outside and making sure that everyone was tested for the coronavirus prior to the Rose Garden Event.

Senator Harris was asked about the Trump Administration approving a vaccine and whether or not she thought Americans should take it and if she herself would. She replied with saying that if public health professionals say Americans should take it, then she would be one of the first to do so. She did add in though that if Donald Trump suggest taking the vaccine, then she would refuse it.

The next topic was focused on both presidential candidates age. One of these candidates will become the oldest president. Susan Page asked Vice President Pence the first question on this topic and asked if he and President Trump have had the conversation about presidential disability, and if they haven't, if Pence thought that they should. Pence failed to really answer this question and went back to discussing the vaccine and the coronavirus.

Harris was then asked the same question. She also pretty much ignored the question. She discussed her career, her accomplishments, as well as what it meant to her to be Biden's running mate. Even though they both avoided the question, which they tended to do often, Susan Page went ahead and moved on.

Her next question was if they thought the candidates should be transparent about their health. Harris stated that Biden was incredibly transparent and claimed that the President has not been. She then brought up taxes and the rumors that Trump only paid $750 in taxes.

Pence then had chance to reply, to which he started by saying he respected Joe Biden's 47 years in public life as well as Harris's public service. He continued on to say that the President is a businessman and defended President Trump by saying he has released stacks of financial disclosures that the American people can review.

Page then continued on the topic of economy. Harris stated that there is a fundamental difference between Donald Trump and Joe Biden. She said that taxes would be raised. She also stated that those who go to a two year community college would attend for free. She also made the promise that student loan debts would be cut by $10,000.

Page then asked Pence if Americans should be prepared for the economy to take months or a year to come back. Pence then followed and talked about things similar to what President Trump did in his debate. He discussed how President Trump cut taxes and how the average household income for a family of four had increased by $4,000. He also discussed how the Trump administration has created 11.6 million jobs.

This is the topic where the two potential vice presidents got into arguments and started interrupting one another. During this argument, Harris at one point claimed that the Trump administration was "coming for you" if a person is under the age of 26 and on their parents' coverage.

The other topics that they covered were climate change, the Green New Deal, China, American leadership, race, along with abortions and the new supreme court justice, Amy Barrett. This was a very important debate and should be looked into further so voters can be educated.