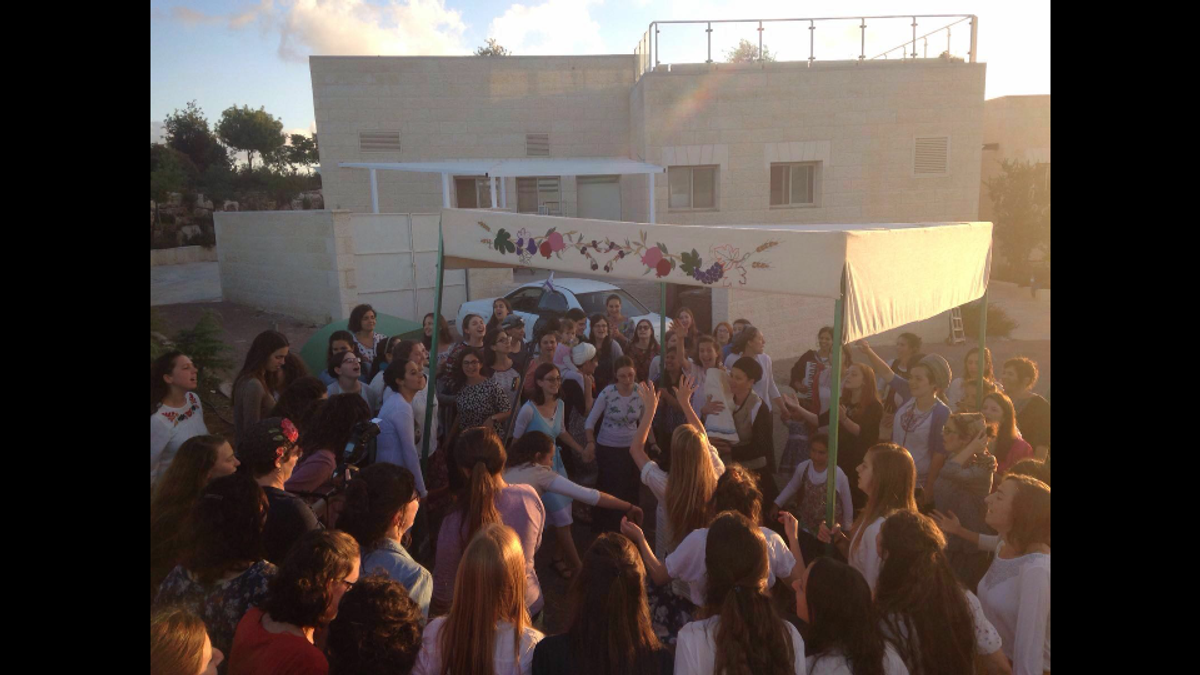 I was walking up to the kitchen to check on the cheesecake when I saw Einat's car. It was decked out in white and pink ribbons, and as I watched, two girls added pink frill to the back.

"Is someone getting married?" I asked.

The girls beamed. "They're bringing the Torah scroll in this car!"

In a way, bringing a new Torah scroll to its resting place at the front of the study hall is like a wedding — a wedding between us and G-d. We celebrate the anniversary of the original "wedding" every year on Shavuot, the day when the children of Israel received the Bible on Mt. Sinai. That anniversary is in three days; the excitement is palpable as we learn and cook and learn again, preparing physically and spiritually for the holiday as the Israelites did in the desert. And now, a climax to our excitement, we receive an actual Torah scroll into our home. The joy with which the leather Bible is danced up to the study hall, even under a wedding canopy, is reminiscent of the greatest and happiest moment in a person's life.

I've only read about such events, in chassidic tales like S.Y. Agnon's. Dancing with the Torah is, has always been, for men only.

But as I rush downstairs after taking the cheesecake out of the oven, I am greeted by a dancing, singing crowd of girls, kicking their legs up in the air as they circle around the Huppah with the Sefer Torah underneath. The scroll is held by Esti, the head of the seminary. She is in a euphoria, throwing her head back to the heavens as she sings the words, "Etz hayim hi...A tree of life it is, to he who grasps it!"

The Torah scroll is passed from teacher to teacher, many of them crying as they cradle it, dancing with the greatest joy I have ever seen. We spill out into the courtyard where a band is waiting, and now the scroll is passed among the students, one girl holding it while everyone else dances around, occasionally giving it a kiss. The sun is setting, illuminating each new face above the Torah, every girl crying or smiling or both. Few of us have ever had the chance to hold a sefer Torah before, and we are in awe. We hold in our hands what we have been studying the entire year, the source of our faith, of our lives.

Then the Torah is handed to me and I am crying and laughing and thinking, "This is feminism." Having the chance to show our love for G-d as much as men do.

There is an unfamiliar woman in the crowd, snapping pictures with a professional looking camera. Maybe we've made the news with our controversial female rights. I hope that she gets this moment down right. I hope that she sees in this moment the joy, the love of G-d that we feel, and not just the rebellion.

The Torah is whisked away to the next girl, and I am left with nothing but a moment that I will never forget.