Types of Festivals That You May Not Have Heard

Types of Festivals That You May Not Have Heard

You never heard about these types of festival. In this post, You will get details about that. 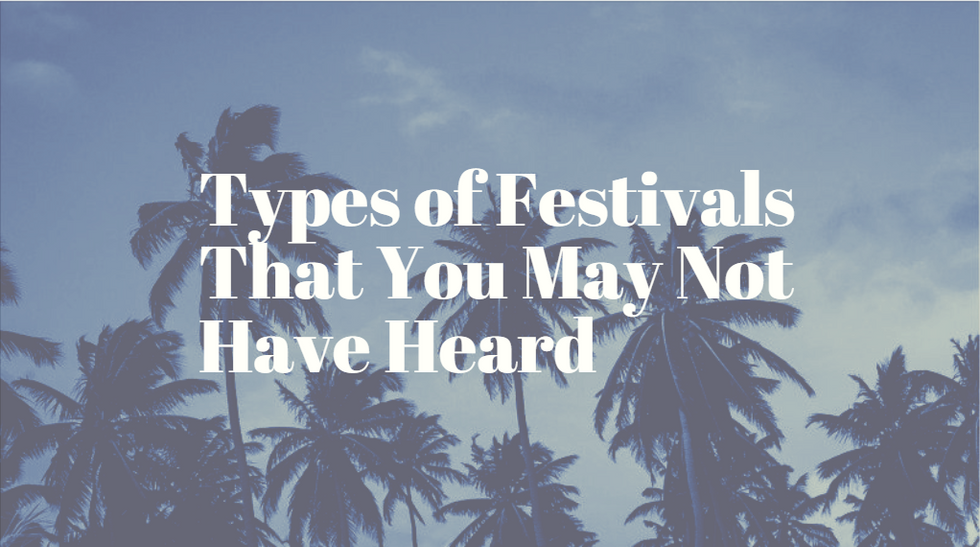 Festivals are non-discriminatory part of humans. They bring enjoyment, relaxation and helps bringing people together. There are several types of festivals out of which religious ones are the oldest ones. Urbanization and civilization have invented many types of festivals so far.

Among all of them, religious festivals gather majority of people where you won't find any age restriction. Hereby we come together to meet our religions. Festivals play an important role towards the development of society while bringing people from economic background together. Apart from that, festivals supply employment to a vast community.

When there were no instruments and gadgets like we have now, festivals have been an amazing source of entertainment. People used to come together and inception of cultural dance occurred. Religious festivals including Diwali, Christmas, Eid etc. have really created a remarkable impact on the world. Here are various types of festivals to know about.

As we discussed earlier, people celebrate such sort of festivals based on their tradition. The event day comprises a signification history over the past which is the reason behind its celebration. This can be further categorized based on cast. Ramadan, Diwali, Poonai, Lunar New Year, Paryushan, Navaratri etc. are popular religious festivals of the world.

The name itself indicates laughing. Laughing is known as the best form of therapy. Comedians are gaining celebrity status by hosting comedy shows nowadays. People around the world arrive at the comedy festivals where popular comedians will be hosting the show. Big Pine, Great Plains, Xanthi, Moontower comedy festival are a few examples of such kind of festivals.

Who don't love dancing on the beat of music? That's what exactly it stands for. People, mostly youngsters, gather at pre-decided venue where well-known bands will be hosting the large crowd. Camping is another unique experience to feel throughout such music festivals. Tomorrowland, Ultra, Sunburn, Download festival are the best examples of this genre.

Similar to music festivals, food festivals are annual festivals. These are kind of emerging festivals which can't be found within majority of countries. Various competitions along with live food presentation will be accommodated inside such food festivals. Taste festival, Warners Bay Beer Festival, Thapar Food Festival, Mistura are similar festivals.

It is basically representation of selected films at screening venues. Based on genre and filmmaking speciality, distribution of awards also happens at the place. These are generally annual events with incorporation of short films. Venice, Toronto International Film Festival, Woodstock Film Festival, Sundance film festival are quite famous ones.