Even though I didn't meet the former president, I gained a much greater insight. 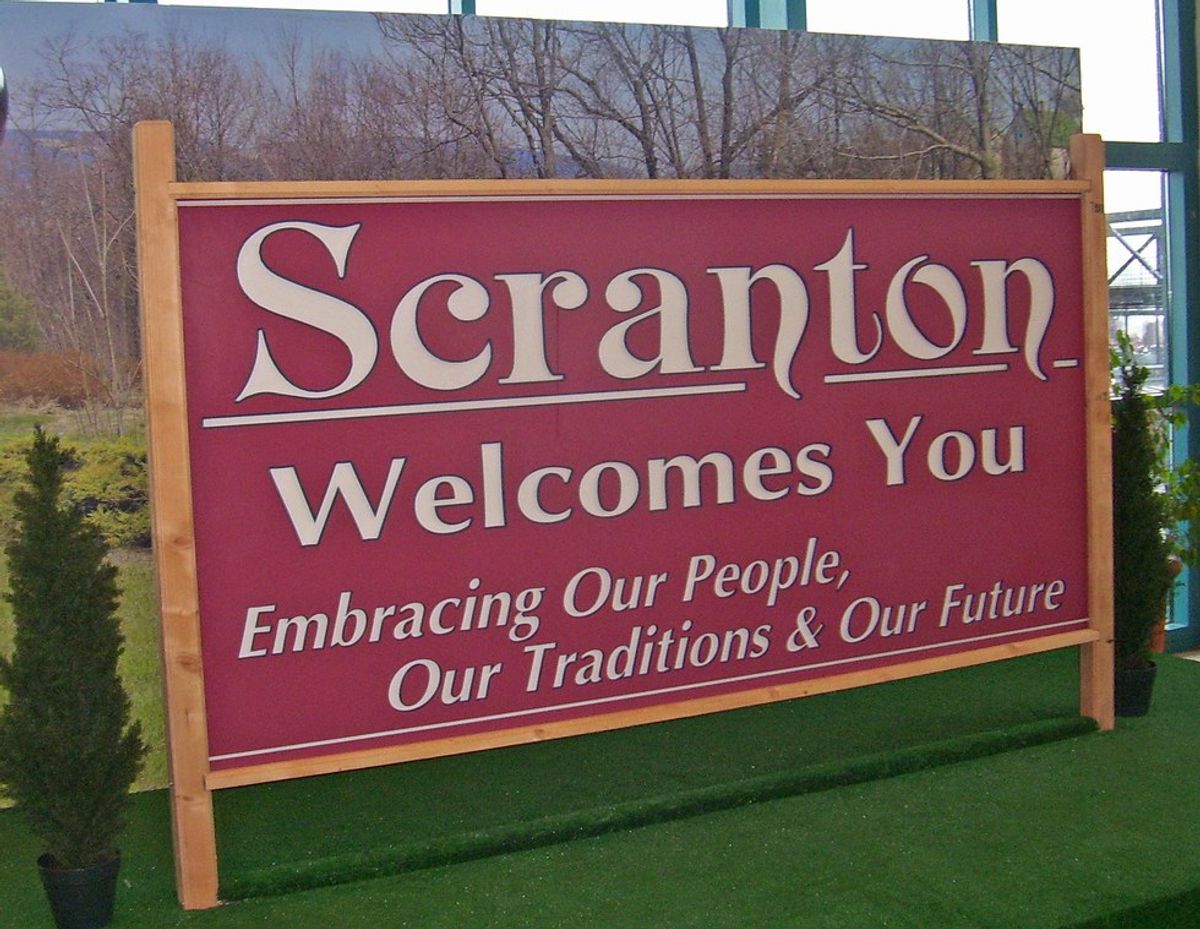 I arrived at the Avoca Airport, which services the Wilkes-Barre/Scranton area, skeptical of any planes that actually flew from there. I parked my car and was immediately suspicious of the dead silence. I couldn’t hear any engines whirring, or the scraping of suitcase wheels against the pavement or anyone hailing a cab. It was eerily still for a place that was supposed to connect you from one place in the country to another.

I retrieved the number of a priest from an email that I had printed out, unsure whether or not I should update his contact name under "Father." Nailah, a girl with a quiet fierceness about her, had ridden and somehow survived the car ride to the airport with me.

We entered the building, allegedly just an hour after former President Bill Clinton had left, and found Father Rick Malloy, Dr. Oliver Morgan and his young son. Together, with the modest addition of a sign that read "Welcome to Scranon!" we comprised the university's welcoming committee for a mystery number of Congolese refugees to the area.

The details were sketchy. We had been informed that a Catholic agency had sponsored the two families expect to arrive and that they had children of various ages. Estimated time of arrival was maybe 5:30 p.m. In the meantime, we chatted with less-than starstruck airport employees about Bill Clinton, discovered that the gift shop had some remarkable postcards depicting Cooper’s Seafood restaurant but no flowers and watched as virtually no one entered the airport.

In the meantime, Dr. Morgan’s son informed us about the Democratic Republic of the Congo (DRC), a country which the UN Refugee Agency identifies as having over two million internally displaced persons in addition to refugees from neighboring countries.

The ongoing political instability and violence in the area has elicited many organizations within the United States to respond with sponsorships to the United States and advocacy within university communities. The Scranton area, due to the efforts of such organizations like Catholic Social Services, has become home for refugees fleeing tumultuous environments like the DRC.

The University of Scranton, concerned about the Syrian refugee crisis, assembled a committee in the fall of 2015 in order to provide a response from the university community. We had decided that although the Syrian crisis was a large priority, that we wanted to reach out from those escaping from all parts of the world, including Central Africa and Central America. Being able to welcome these two families with gifts, like appliances and sweaters, became a small way that we as a community could help.

As the clock neared 7 p.m., we grew more anxious about the whereabouts of the refugees. At one point, we had mistakenly waited outside the (only) gate with arrivals from Philadelphia, much to the amusement of the dozen or so people entering the airport. Eventually, we discovered that they weren’t even flying in and actually had made a 17-hour trip by ground—not sure from where—and were arriving outside of the airport. I have no idea why they came to the airport in that case, but soon enough, a huge van arrived in the front of the area.

I caught a glimpse of the faces in the window—this was it. We raised our sign and smiled from ear to ear. In exchange, a thin adolescent boy emerged from the van. The door slammed. He looked so tired, I remember thinking. The rest of the party trickled out of the vehicle, each of them politely nodding and shaking our hands. Halfway through greeting them, it had occurred to me that they probably spoke French. I looked down at the sign written in huge English letters.

Like the boy, they all looked drained. Even the children, whose ages were difficult to tell, were quiet, eyes retracted down toward the wet road. They were dressed in tight jeans, bright tops and all had neat braids with beads in their hair. I remembered thinking that they had look so dignified, with their colorful luggage in tow.

Both families were female-headed and received the gifts, with gentle merci’s. We loaded the boxes into the trunk and Father extended an invite to the university’s Christmas breakfast. For the first time, their faces thawed into a warm smile. Merci.

In my time anticipating the refugees, I had constructed a mental composite of how their first moments would be. I had imagined a stronger reaction, akin to those videos always circulating social media: teary-eyed women who were crying with joy, kissing the ground.

I had romanticized the situation. It was wrong for me to assume that our welcome, no matter how heartfelt we thought it to be, would provoke Humans of New York-style reactions from these families.

While those powerful moments certainly do happen, I think an important part of any instance where you are in a position of being able to help is to recognize the humanity of the people you are helping. These families, who we were able to communicate with via an interpreter who was a former refugee, had been in refugee camps for years and after traveling for hours, had every reason to be withdrawn. They had left everything they had known in the absolute worst of circumstances for a foreign place like Scranton.

If anything, I am grateful that they were so polite despite our own failings. In my own expectations and our cultural oversights, we had learned ways that we could better our own efforts. If we want to be able to make an impact on the lives of anyone, we have to use our own privilege to the best of our abilities in being culturally sensitive and aware. There are going to be so many people here who will not understand their situations or even welcome them, but the best that we can do is begin to try.