The Difference Between Equity and Equality

The Difference Between Equity and Equality 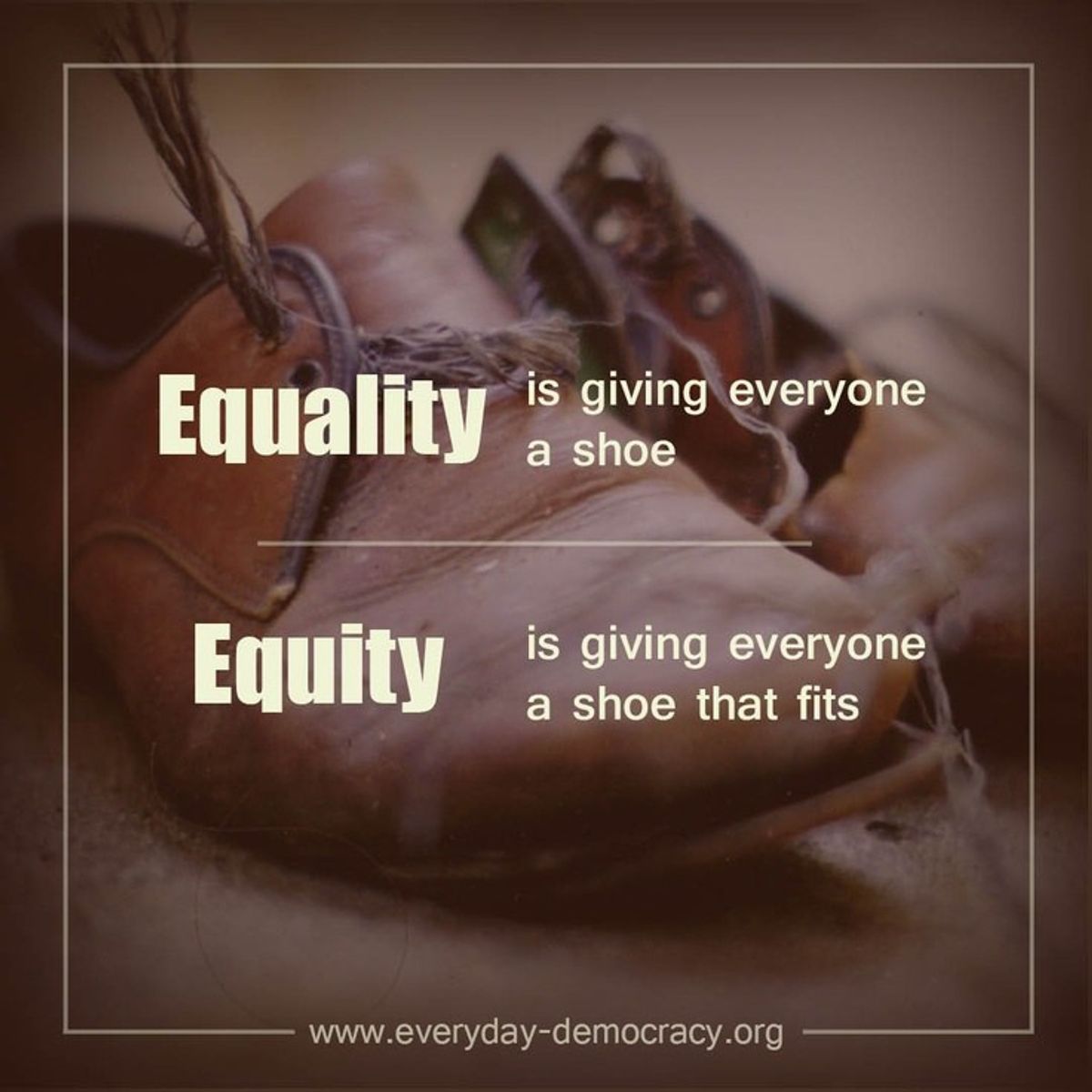 I spent most of my life believing that equality was everything. As long as I treated every person the same way, nobody could be unhappy with the results and it was all okay. Flash forward to my sophomore year of college when I became a Resident Assistant. We have extensive training covering a variety of topics, but one that stayed with me was the difference between equity and equality. So, let me explain it to you.

Equality is defined as "The quality or state of being equal; the quality or state of having the same rights, social status, etc." That sounds pretty good, right? And equality is good! There is absolutely nothing wrong with promoting equality, or in other words, fairness. But when you place equality next to equity, that's when the lines become a bit blurred.

Equity is defined as "fairness or justice in the way people are treated." You might be thinking "Oh, they're pretty much the same thing," but in actuality, they are very different concepts that cannot be accurately explained by a simple definition.

When we talk about equality, we pretty much mean that everyone gets the same thing. For example: in a classroom of first graders, if Jimmy gets thirty minutes of recess, every other child gets thirty minutes of recess (barring any disciplinary action restricting recess time). Okay, that's equal and fair. Now imagine a classroom of students with a writing test prompt in front of them. The instructions are printed on the first page of the exam, but while the majority of the class reads them, one student has a pair of headphones to listen to the instruction. This upsets one of the students, claiming it is unfair that the other student gets to listen while he has to read.

Is that scenario really unfair? That's where the difference between equality and equity comes into play. While equality is treating everyone the same way, equity is giving each person what they need to be successful. At first glance, this seems like it may be unfair, but in reality, it's moving everyone towards the same level of success. Not every person starts from the same place, nor do they have the same needs. This is most apparent in education, where different learning types (visual, auditory, tactile, etc.) are demonstrated.

Another example is providing extra services in school to the students who need them, such as after-school programs, and tutoring. For example: Maddie does exceedingly well in math, while Susie struggles. Susie begins attending tutoring sessions, and after a few weeks, her math scores improve. Since Maddie does not need the extra help, Susie really isn't getting anything that Maddie doesn't already have, so it's fair. All that happened here is that the playing field of success was improved by allowing Susie to receive the extra help she needed to learn the same material as Maddie.

In case my explanation was confusing, here's a picture denoting a PERFECT example of equality versus equity:

Equality does not "level the playing field," it simply gives everyone the same thing. Equity, however, recognizes that some people have less privilege than others and therefore need a little bit more help to reach the same place. Instead of making everything equal, let's make it equitable.