The Amazon Is Burning, And Here's Why You Should Care

The Amazon Is Burning, And Here's Why You Should Care

The "Lungs of the Planet" are on fire, and no one is talking about it. 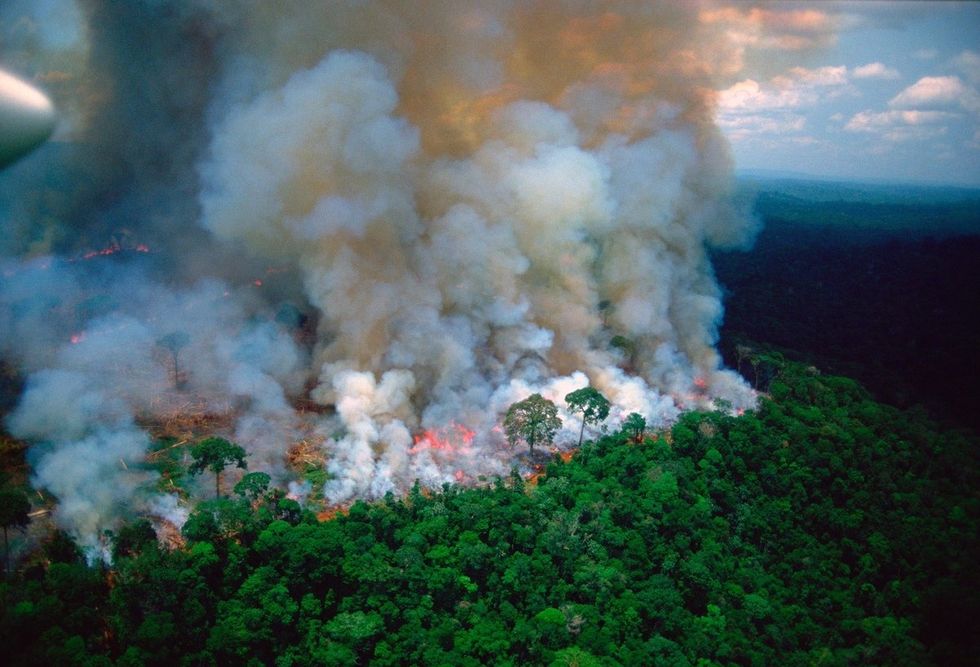 That's more than 87,000 forest fires recorded in Brazil since January 1st, 2018. The Amazon rainforest is referred to as the "Lungs of the Planet" because it accounts for more than 20% of the oxygen circulating in the world. These fires not only affect the biodiversity of the Amazon, but they are also decreasing the amount of overall oxygen in the atmosphere.

I'm sure you've heard the phrase, "we only have 12 years to reverse climate change" at some point in the last month. This phrase was said by Bernie Sanders during his presidential campaign last August. While Bernie has the right idea, instead of reversing climate change, which is highly unlikely in the near future, scientists have theorized that we must keep the Earth below 1.7°C or 2.7°F, with a span of about 11-12 years to do so. After that, the rate of greenhouse gases in the atmosphere will be too great to reverse the damage. So where does the Amazon Rainforest come into play?

The burning of hundreds upon thousands of trees and photosynthesizing plants releases massive amounts of carbon dioxide (CO2), a greenhouse gas, into the air. Now here's your mini-science lesson: CO2 molecules, among various other greenhouse gases, have a strong ability to absorb heat. Therefore, an increased amount of CO2 in the air will capture more of the sun's energy and retain that heat, warming Earth's atmosphere in the process.

According to the EPA's 2016 CO2 Emissions from Fossil Fuel Combustion, the United States alone burned over 4,787 million metric tons of fossil fuels in 2016. As it seems we are only increasing the amount of CO2 in the atmosphere, imagine the rate of CO2 burned in the last year PLUS the amount released from the Amazon Rainforest fires. At this rate, we are accelerating climate change so fast that it will soon be too late to reverse.

By acting quickly and reducing the fires that occur in the Amazon, which happen naturally and from active farmers burning their crops during the dry season from June to December, we would be able to reduce a quarter of the amount of CO2 currently drifting into our atmosphere. Agriculture in South America has been increasing rapidly over the past fifty years. More trees are affected by deforestation each year to make room for crop beds or livestock pastures, and over 20% of the rainforest is already cut down. Farmers will burn their cropland during crop rotation each year to re-instill nutrients into the soil, but in doing so they are contributing to climate change and destroying diverse habitats.

To tackle climate change, the world will have to act on the many aspects that contribute to it. However, each action taken towards prevention and reduction will help. By starting with the Amazon fires, which are still burning to this day, we can reduce a massive amount of greenhouse gases that are advancing global warming. The first step is getting people aware and sharing the message. Spread the word about rising deforestation and the implementation of agricultural plots and pastures. Get people talking about the devastating consequences of the fires: habitat loss, reduction of biodiversity, home destruction, and the health effects it has on the people who live there. This can spark action in people, inspiring them to create volunteer groups to go and stop the fires, and having aware-raising fundraisers/donations to support those trips. On an even larger scale, appeal to large corporations such as the EPA and Greenpeace to organize a plan to stop the fires and control it from a government level.

So after all of those facts and call-to-action requests, why should you care?

We all share the Earth. There is no other place (that we know of) that can support life as Earth does. We all came from the Earth, so it is our right to take care of it. Each person owes the Earth their lives because without its precious resources we would not be able to live, think, breathe, create, or inspire. Everyone has the power to do something, and the first step is educating yourself and others about the threats we, the human race, have created against Earth.