We live in a time where problems occur when they do not need to, where we fight with people without thinking first. 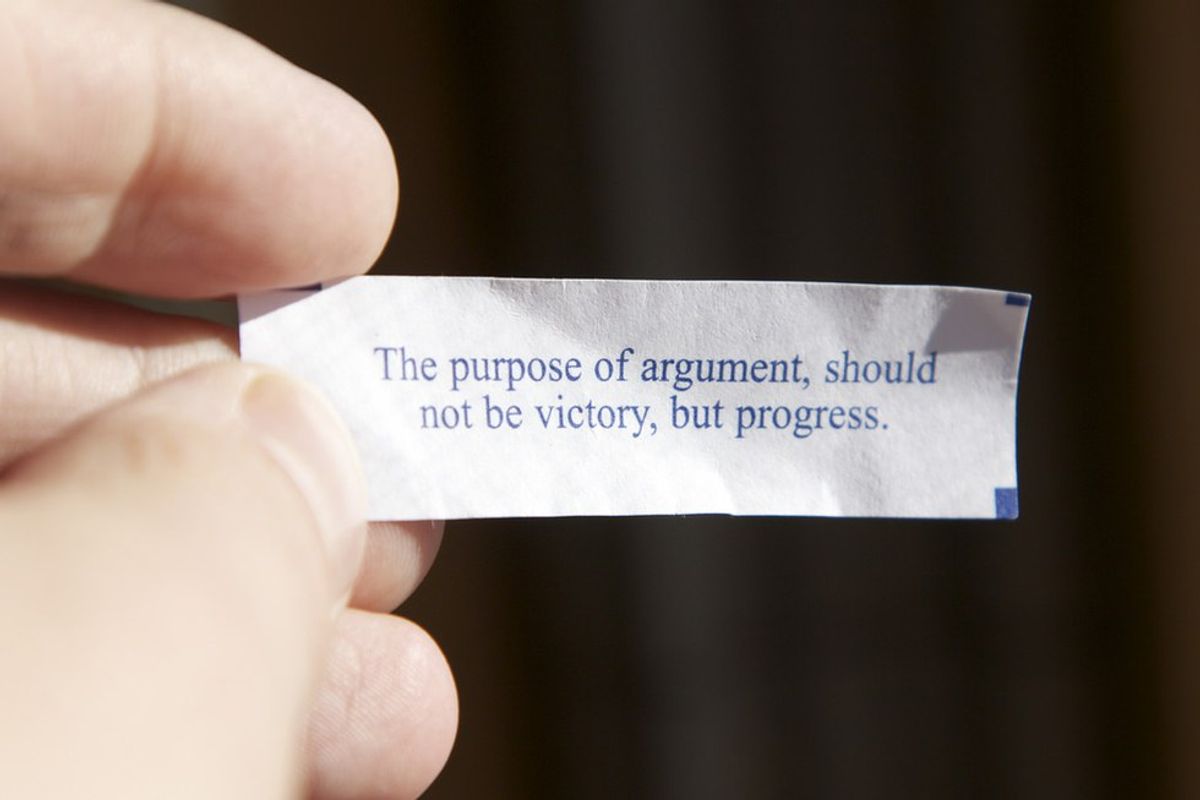 So, here’s the thing about conflict. In most cases, conflict is based on a false assumption. Many conflicts do not actually need to occur. So, let’s discuss the basics.

A conflict can only exist if both parties are aware that there is an issue (expressed struggle). So, let’s say you are a newspaper subscriber of the “old school paper” variety. I know, retro. Now, let’s say the paperboy or papergirl throws your news into the bushes every morning. Is there a conflict there? No. Are you angry? Annoyed? Probably, yes. So, when does this situation turn into a conflict? When the paperboy or papergirl knows there is a problem. And, yes, you can think to yourself, “Shouldn’t they already know that people don’t like fishing newspapers out of prickly rose bushes?” But, you still haven’t made them aware of the conflict. Now, you can do this verbally. Yell something out the window every morning. You might just stand on the front porch, arms crossed, glaring at the delivery person. Once you do this, conflict exists.

This is why it is so important for us to voice our concerns, to tell others what the problem is. You cannot solve a conflict if it doesn’t actually exist.

Now that we understand what conflict is, let’s talk about why it exists. Most conflict occurs because of perceived incompatible goals, perceived scarce resources or failure to realize that we rely on one another to exist.

This is an “us vs. them” mentality. The idea that if one person wins, the other person loses. This sees situations as absolutes, there is a right and there is a wrong. But, in the real world, that’s just not how things work.

Now there has been a lot of conflict in the news lately. And, while I do not want to talk about those specific conflicts, I do want to mention that I am constantly seeing PIG. Are there situations where you actually have PIG? Sure. In a baseball game, one person wins and the other person loses. In a job interview, one person wins and several people walk away without a job.

But, actual problems do not really have perceived incompatible goals. Think about problems in a full-spectrum way. They really are not cut and dry. Let’s say you run a dry cleaning business and you need new equipment. You go shopping at your normal supplier only to find that they’ve tripled their prices. Do you need to start screaming at some poor kid behind the counter? No. Do you need to threaten the business owner? No. Could you solve this without confrontation or conflict? Absolutely. Maybe you have a conversation with the owner about your dedicated patronage and negotiate a different price. Maybe you decide to get your equipment elsewhere.

If the negotiation works out, there was zero conflict. The relationship is maintained. Everyone walks away happy. You saved some money. They still made a sale (and likely some money). If you go to a different supplier, is there a conflict? No. You take a little more time shopping, but only spend what you’re looking to. They lose a sale, but have other customers. If they lose enough sales, then they will change their prices.

We tend to jump to fighting and disputing before analyzing the perceived issue. So, let’s say you think that you do not have enough money to go around and that this causes problems with a roommate or significant other. So, you just fight and fight until no one is happy and everyone resents the other person.

Could this have been avoided? Probably. Maybe you go to Starbucks every morning and spend $5 on your coffee and you order pizza twice a week which costs $20 each time. Could we skip and/or cut down on these things? Yes. So, instead of spending $35 on coffee every week, maybe you make coffee at home which costs much less. Instead of pizza twice a week, maybe you have pizza twice a month. How much money have you saved? Around $240 a month. And, let’s say your roommate smokes two packs of cigarettes a day and that they cost $8 a pack. That’s almost $450 a month. Can your roommate cut down? Sure. If they cut down to one pack a day, they save $225 a month. That gives the household $465 more each month. That solves the problem.

We can do the same thing with time, right? How many hours a day do you watch television? Play video games? Go out with friends? Can you cut down on these things? Yes. You might cut a half hour every day. That’s 3 ½ extra hours each week. These conflicts, most times, just do not need to occur.

Now, we all know that no matter how hard we try or how much we save that ends do not always meet. We cannot control how others behave. So, conflict is going to happen. But, what we can do is take the time to step back, analyze the issue, look at it from both sides and then try to stop it from happening. And, remember, we’re all in this together. We, as humans, depend on others in order to survive. So, sometimes you have to give more than you get and other times you get more that you’ve put in. Through all of this, you build, strengthen and maintain relationships with other people. These are the people who will give you a ride when your car breaks down. These are the people who know how to change the ring under your toilet. These are the people who stop by just to say hello. These are the people who make your life manageable.