The birds and the bees aren't the only ones doin' it.... 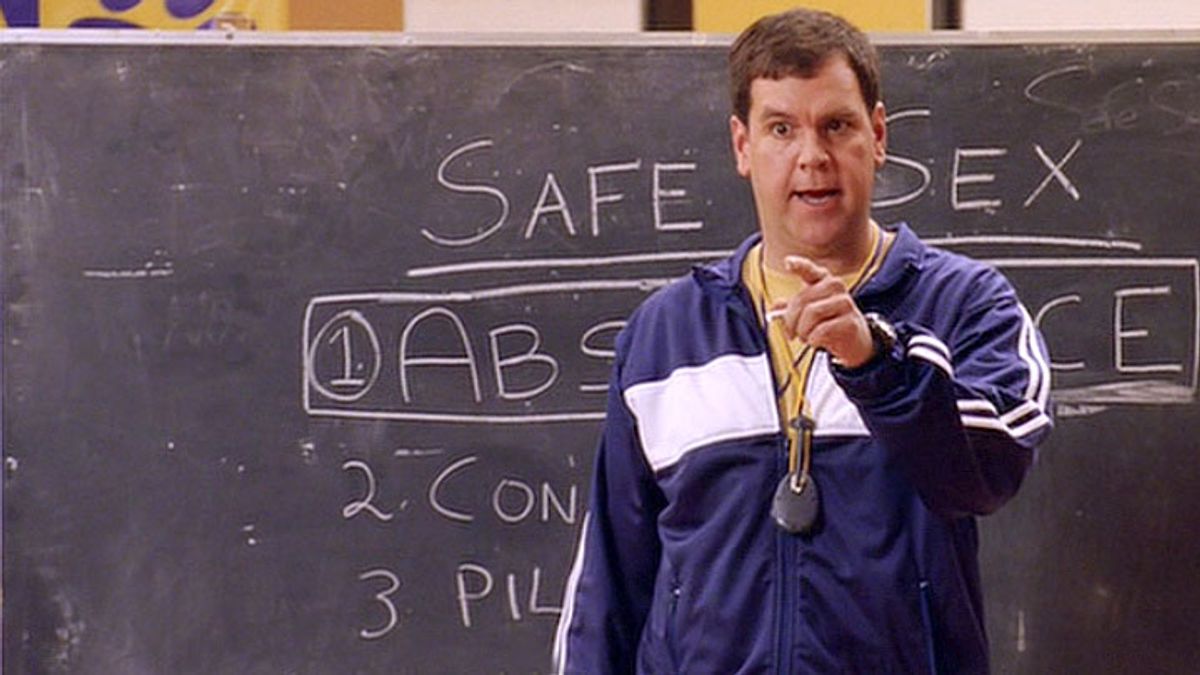 Mean Girls is one of the most iconic teenage movies of the past decade and probably this one, as well, covering topics from bullying, cliques, romance, and even, math (“the limit does not exist!”). But one part that some people skim over or chuckle at is when Coach Carr teaches Sex Ed. Stuffed on the bleachers, the co-ed class listens to Coach: “Don't have sex, because you will get pregnant and die! Don't have sex in the missionary position, don't have sex standing up, just don't do it, OK, promise? OK, now everybody take some rubbers.” The scare tactics laced with hopeful promises and so many “don’t’s”, this almost sounds like the current American sexual education system…. oh wait. Jokes aside, the truth behind this scene is absolutely terrifying.

Contrary to popular belief, we cannot scare the hornyness out of teens, even though many people probably try to… people like Coach Carr. In fact, 47% of high school students reported having sex before graduation, with the average age of having sex for the first time being 17 (sources for this article below). And when most Americans choose to have sex, and with more than one person in their lifetime, it’s concerning why we don’t have a more regulated system. Sex is not bad, so let’s stop treating it like it’s a threat. But to some, it is, a political one at that. That’s the problem, though: right now, the state of sex education has become too controversial to enlighten teens on accurate medical data. It’s not how we care for our bodies and others’, but rather the morality of when we do it, how we do it, and who we do it with, if at all.

Politics, without getting too political, is still important. Sexual education is not required teaching material in 28 states… at all. To spell that out, more than half of America does not have to learn about a normal occurrence most everyone will go through. And who needs accuracy? Medically sound information is only required in 13 states and DC; so if a lack of knowledge wasn't bad enough, now we enter the possibility of bias and plain-ol’ lies. Not using medically accurate facts in a Sex Ed class is like taking a history class without it being historically accurate. Just like George Washington was the first President of the United States, condoms are 98% effective when the directions are followed. Now you know.

But who needs condoms when abstaining is the only way to practice safe sex? Since 1981, abstinence programs have grown due to $1.5 billion in funding. Just recently, spending for that matter has decreased. Instead of comprehensive sexual education in schools, 37 states require abstinence education; of those, 25 stress it as the correct option. Though abstinence is predominately stressed, students have not stopped having sex. Because they were only told that they shouldn’t, some students probably didn't know how to protect themselves or know the basic ins and outs of the endeavors (pun intended). Programs that cover more than abstinence are found in 18 states plus DC, some opting out or in depending on teen pregnancy rates.

Arguably, contraception cannot prevent everything, yet it is better than ignoring what happens. Prevention and preparedness instead of denial and disgrace. Right or wrong, religious or political, sex happens. And what about other topics linked to sexual activities? Why don’t we address non-heterosexual sex? Pleasure in a relationship? Body positive-y? Consent? Sexual education, when taught correctly without discrimination, is very beneficial; but in four states, teens can be shunned for their sexual orientations, programs discouraging sexualities that aren't “straight”. This is not okay. And reportedly, teens are equally divided when asked whether nodding, getting a condom, or undressing is a form of consent. This is not okay. I want to live in a world where sexual education IS taught, using precise, inclusive language, accurate medical information, and without personal objectives pushed on the audience.

Comprehensive sexual education should be taught in schools because the truth is, teens have options. Whether you want them to save themselves for marriage or be safe exploring relationships, teens should hear all sides and be ready, bottom line. This is one issue to not shy away from to “protect” the youth. Because when the Journal of the American Medical Association directly links "50,000 new HIV infections, 20 million STIs, three million unintended pregnancies, and one million rapes annually” to the current status of sexual education, we need to talk. Pillow talk, anyone?

As someone who is planning on abstaining until marriage, this issue is still important to me because I know people who simply do not choose the path I do, which is perfectly fine. For those people who do choose to explore, I know it is better to show responsibility over anything, whether one defines that as not having sex at all or doing it safely. People are independent and they make their own decisions, and whether those choices conflict with my personal or religious beliefs does not overrule in my mind that everyone should be smart and safe. I want people well-informed with all sides and all opinions in a loving, trustworthy, and mature community for such a racy yet necessary topic. A topic where everyone should have the opportunity to learn about the same choices, choices more than just looking at diagrams.

Barclay, President and CEO of the American Sexual Health Association, puts it best. She explained that if your child has not yet completed driver's ed and earned a license, "you would never hand your car keys to your kid and say, ‘Okay honey, go drive to the store.' You'd wait until you have confidence that they'll be safe and that other people will be safe. We don't do the same thing with sexual health.” And we really should. Ignorance is bliss until it affects you or someone you love.

Note: I am in no way a sexologist or an expert in this category, but I am opinionated,as you can tell. These facts were not pulled out of thin air, trust me. I encourage you to peruse these sites so that you may learn more, develop new thoughts, and possibly change your mind, even if that means disagreeing with me. Awareness is key