Parents, It’s Natural If Your Kids Go To College And 'Come Back Political' 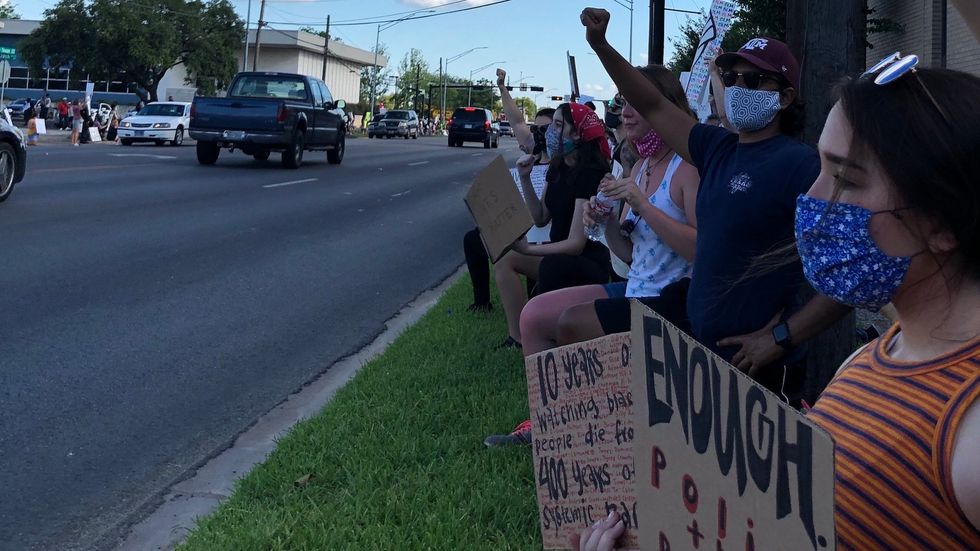 A growing community known as #Resist: College Station has taken on the national agenda in a local Meetup group. This particular group exists as one of more than 1,000 branches of the country-wide #Resist coalition with more than 245,000 members. #Resist: College Station, with a membership of 290 (at time of writing), holds events to "drink and yell at the sky" out of frustration with systemic issues, locally and globally.

Human resource development junior at Texas A&M Milos Tiosavljevic, who has been a member of this group for over a year, joined to satisfy his social and political needs.

"Social activism is a big thing when it comes to being a college student," Tiosavljevic said. "Resist has given me a community with views we can rally behind. A&M is a large campus. It's hard to find other people with similar values without having that impossible political conversation early on."

Speaking of Texas A&M University, according to a Niche poll inquiring a description of the university's political beliefs, 68 percent of the respondents described the campus as "conservative" or "very conservative." Despite this political proclivity, Tiosavljevic thinks that #Resist has an important place in the community.

"Resist fits into our scene well because it is a sign of the times. Politically, the campus itself is shifting rapidly. A&M is at a tipping point. As the next generation of ideas come in with the newest class of 20,000 students, the population gets more liberal and more civilly involved."

Like so many young Americans of all political stripes, Tiosavljevic takes activism personally — because policymaking affected him personally.

"Healthcare is my number one issue," Tiosavljevic said. "Recently, I had a medical issue. I was told the wait time for a specialist appointment was six months or I could pay $10,000 to see the doctor that week. My family had to take out a loan because I would've died without those antibiotics. This is ridiculous. This requires change through activism."

#Resist, partnered with nonprofits like ACLU and Planned Parenthood, advocates for that change, as well as renovation in "democracy, equality, human rights, social justice, and sustainability," according to its webpage.

Shifting from his comments on how he faces the future, Tiosavljevic expresses concern for the country's present condition of democracy through mentioning the topic Thursday's online protest: gerrymandering. This event functioned as a response to the Supreme Court's 2019 ruling that federal courts cannot rule on partisan gerrymandering.

"Gerrymandering is unacceptable. No matter what side you are on. This is not what our country was founded upon. I'm glad we're fighting."

"Gerrymandering has become a major issue because each state's most powerful party is free to draw its own boundaries in order to keep the power," Portney said. "Now, we have a fundamental question of if the state of democracy is at stake."

What's #Resist's reaction to this reality? To "drink and yell at the sky" at Revolution Cafe, of course.

While gathering in public places and screaming from sea to shining sea seems like an unconventional approach to activism, the invitation explains that the event is for people to "yell... vent… and drink" in a kinship, instead of alone. That communal aspect is what drives members like Tiosavljevic forward.

"We are less of a group, more of a movement," Tiosavljevic said. "See what we have to offer. Don't be off-put that our name implies rebellion because we want peace! In the end, get people together to act on political issues, no matter what you believe."

This instance of acute awareness of societal problems among young people may have occurred in a sleepy town in Texas, but the increasing frequency of young-scrappy-and-hungry activism is happening from Hong Kong to New Delhi to Milwaukee. Reputation-wise, millennials and Generation Z often exist as the butts of their parents' jokes after these students express newfound interest in social causes after attending university because they are learning about new topics and exposed to novel experiences. In numerous cases, higher education is related to, or even at the center of, young adults' activism.

Corroborated by experts at the Census Bureau, there is a direct and increasing relationship between educational attainment and political participation. Engaged students committed to the ideals of American democracy have led the way in campus and community engagement that contribute to lasting policies. Thus, let's allow ourselves to catalyze the solutions needed in the evolving circle of public life — it's only natural.