Painted Body Project: In Response To The Trump Administration
Odyssey

Painted Body Project: In Response To The Trump Administration 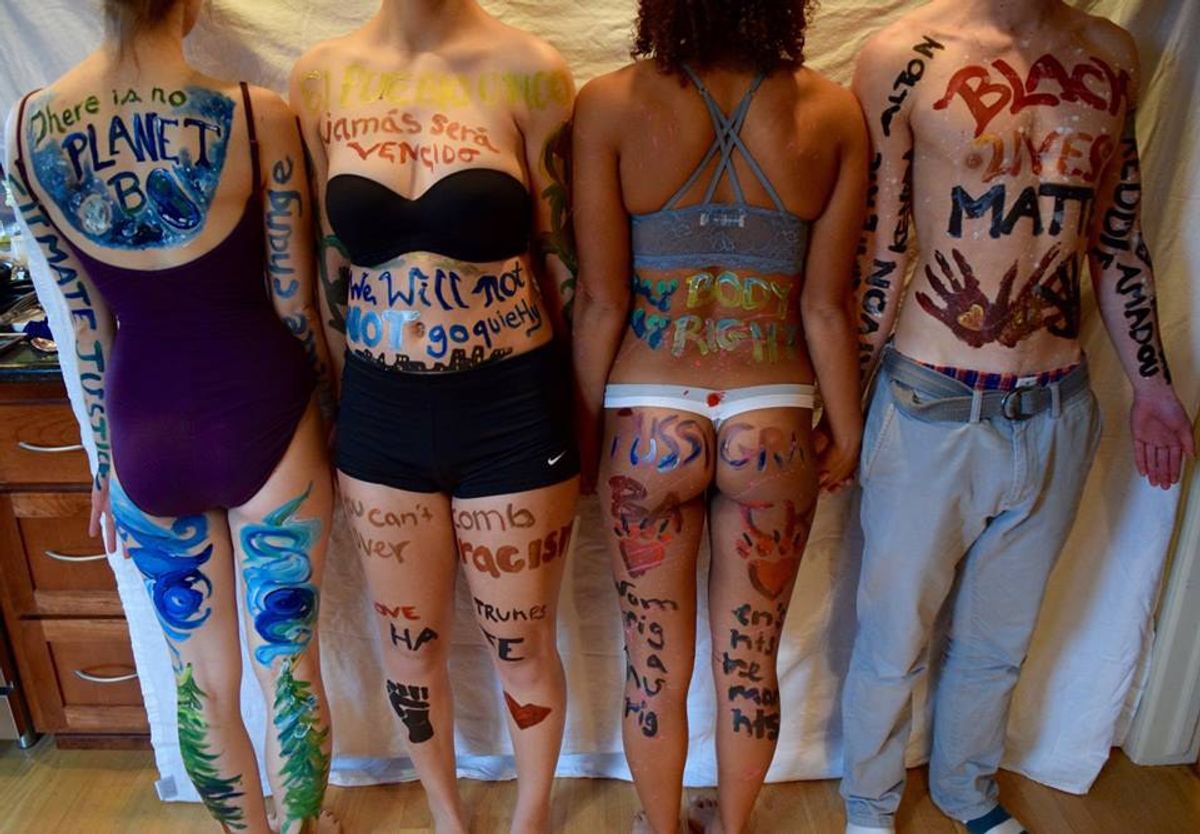 I created this painted body project in response towards our country’s next administration looming on the horizon and the explosive protest movement the election of that administration incited. As a feminist, queer, multiracial woman I was terrified after the election of Trump...but after seeing communities coming together across the country in revolt of Trump’s beliefs and proposed policies, I felt connected and empowered and just a tiny bit hopeful.

I was inspired by how Trump’s election brought so many different protest movements together, such as climate justice, black lives matter, feminism, Hispanic rights, immigrant right, that can sometimes be at odds with one another. When I marched in the protest held on the Claremont Colleges campus the Friday after the election, I could tangibly feel the energy in the air and the human connection and support flowing between protestors.

Although it seems as though nothing can stop Trump from targeting marginalized communities, tearing down progress gained, and sending our country back in time...we have one another. We have each other to echo one another’s voices, to hold each other's backs, and raise each other's hearts. I created this project in order to echo this sense of community and connection and to carry this slice of hope I still hold on to.

All paintings are created by yours truly using acrylic paint and are captured beautifully by the photographer, Annie Richards.

Created in response to the Trump/Pence administration's denial of climate change and vow to reverse measures to protect our planet. There truly IS no planet B... I liked the idea of painting this on a woman's body to honor the long-held belief in many cultures that our earth has a female spirit and essence.

I liked the idea of using a white male canvas for this message...as a way of both illustrating white guilt as well as demonstrating that it takes all of our voices to make change happen. I painted the names of innocent black people killed by police brutality upon the model's arms to signify both white responsibility and systematic failure. The lower half of the model's body are familiar and disarming...the casual pants and the mismatched socks in order to send the message that racial injustice and racial change are not perpetuated by extreme figures but rather by people that pass by us on the street.

This piece was inspired by the feminist uproar against Trump's words on women. I used empowering quotes from widespread protests splattered in pink paint to represent both female reproductive rights. The red smudge on the model's underwear was a serendipitous accident that coincidentally calls into question our society's stubborn aversion to female menstruation that prevails despite the fact that female bodies have existed as long as male bodies have.

This painting was inspired by the chant and Chilean song, "El pueblo unido jamás será vencido", which translates to the people united can never be defeated. I felt like my entire vision for this project echoed that quote and wanted to use it along with others to represent Hispanic and immigrant rights, a demographic especially targeted by Trump. I painted lilies inspired by the work of Diego Rivera up and down her arms in honor of Rivera's influential work in America as a Mexican painter.

The title of this piece comes from the sonnet Lin Manuel Miranda wrote and recited at the Tony's in response to the Orlando shooting targeting the queer community. I created the piece with holiday themes as the holidays are the time one spends surrounded by loved ones and family...where queer couples are not always welcomed or accepted. Additionally, it is a time where the word 'love' is frequently floating in the air and its true essence is ruminated upon.

This last photograph displays all the movements together (except the queer piece, there's only so much I can fit in one frame), in order to symbolize the strength in numbers and most of all in unity.