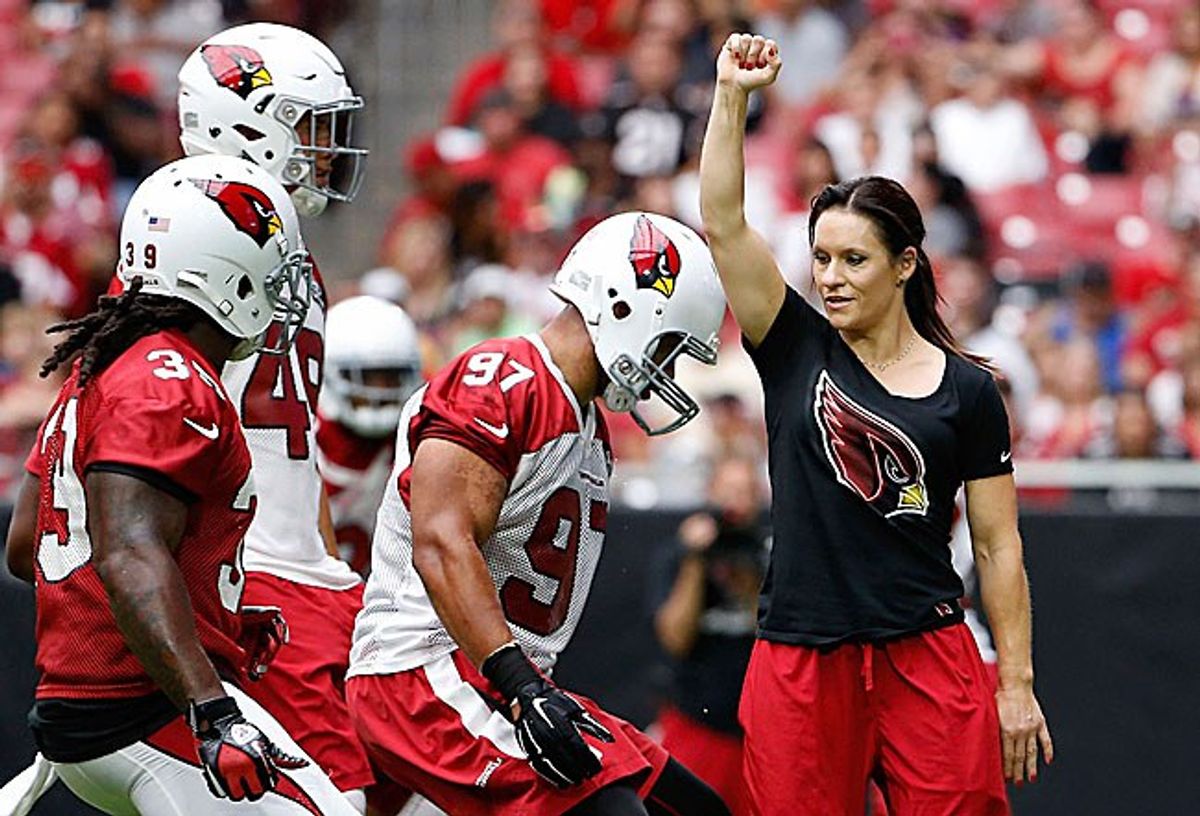 It's rare that we see women at the forefront of a professional sports team, but Jennifer Welter, along with other women in the NFL and NBA, is doing just that. Jen Welter has been officially deemed the first female to coach in the NFL as she served as an assistant coach intern on the Arizona Cardinals in July. Welter is breaking down barriers for women by boldly changing football, a men-only world.

Jen Welter, also known as "Dr. J," was a training camp and preseason intern working with the inside linebackers on the Arizona Cardinals in July. As an assistant coach intern to head coach Bruce Arians, Welter’s internship ran until the third preseason game along with six other interns.

Welter has a Ph.D. in psychology, previously played rugby at Boston College, and played 14 seasons of pro football as a linebacker for the Dallas Diamonds with the Women’s Football Alliance, with one season as a running back and special teams for the Texas Revolution of the Indoor Football League, becoming the first woman to play a “nonkicking position in a men’s professional football league.” Welter has also won four championship medals and has been awarded two gold medals with the United States team at the International Federation of American Football Women’s World Championship. All of which is outstanding, but would have remained unacknowledged if it was not for Coach Arian spotting her talent.

Welter was first recognized at the OTAs this spring, and Arian “found her really passionate about football. [He] asked if she was serious about it, and if so, [He] would love to give [her] the opportunity to coach with [the Cardinals]. She jumped on it. She loves to coach.” Alongside her passion, she was also hired for her skill, outstanding resume, and attention to her players.

Welter initially thought she would be greeted with pessimism and contempt, but was pleasantly surprised by Arian, the players, the media, executive Michael Bidwill, and general manager Steven Keim’s welcoming nature.

As stated by MMQB’s Peter King, The Arizona’s owner Bill Bidwill in 2004 was “the first owner to hire African-American men, Dennis Green and Rod Graves, as coach and general manager in tandem. Last season Arizona was the only NFL team with black coordinators on offense and defense (Harold Goodwin and Todd Bowles, respectively). This year the Cardinals are founding a fellowship program that gives minority coaches a two-year job on an NFL coaching staff, in the hope that it will help coaching prospects transition to the coaching lifestyle.” With former NFL linebacker Levon Kirkland being the first to take up this inclusive fellowship program, Coach Arian hired Welter in hopes of encouraging other teams to give women an opportunity to work in the NFL.

Arian acknowledges the important contributions women have in athletes’ lives. Mothers, grandmothers, sisters, and wives inspire and support men in the sports world, and Arian sees how much his men have learned from women. Therefore, Arian knows what a big role Welter could have in his players’ lives, on and off the field. But, as stated by Welter:

" Being a woman is part of who I am. It’s not all of who I am, and I’m not here just because I’m a woman. I’m here as a football coach. If my opportunity in the NFL is a chance to show other woman what’s possible in this world, and show guys that there is another dimension to a lot of women -- that this game that they love can be loved and respected by a woman -- why wouldn’t I highlight that? At the same time, my most important obligation right now is helping Coach Arian and his team … I am focusing on attention to detail and technique with individual players, and the players have been very receptive."

In Welter’s short time working with Arizona, she has made tremendous contributions to the team and football at large. As reported by CBS news, Welter wrote individual letters to the Cardinal linebackers, creating a personal connection with each of them. Also, in response to recent domestic violence cases, she has suggested relationship counseling for all players in order for them to remain positive role models on and off the field, but she also knows that domestic violence goes beyond the field and is a societal problem that needs to be fixed. As explained by Arian, "coaching is nothing more than teaching"; it is about "how are you going to make me better? If you can make me better, I don't care if you're the Green Hornet, man, I'll listen." And Welter says, "They want to get better. They're competitors. They want to win. It's not about whether it's coming from a male or a female, it's like 'Do you have something that can help me and if you do, I'm going to listen and be receptive.'"

Overall,"the truth is, she has more playing experience than some of the coaches who coach me now," as realized by Mike Freeman in an exchange with Bleacher Report.