Why Chicago 'Pizza' Is The Hitler Of Pizzas

Why Chicago 'Pizza' Is The Hitler Of Pizzas 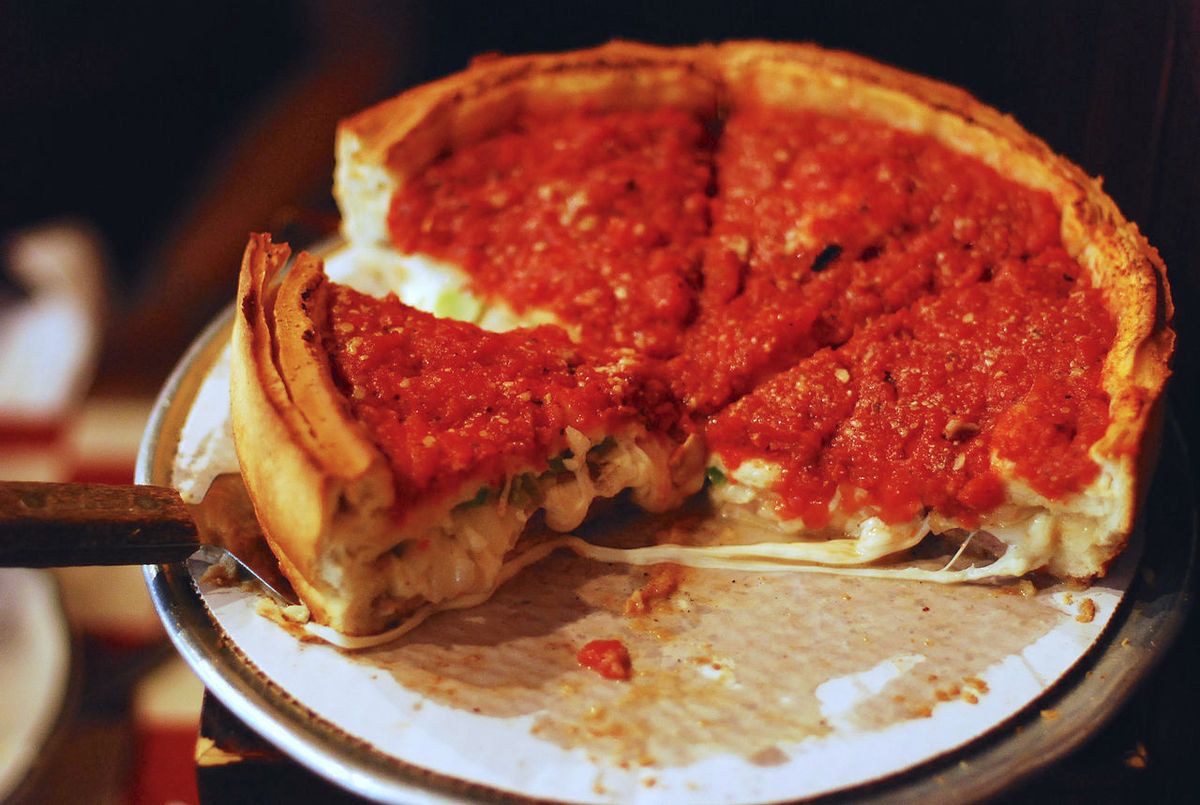 As a proud New York resident, there is nothing I like more than a good slice of pizza. New York City has the best pizza in the world. That is a fact. If you don’t think so, then you are an idiot. Period.

There is nothing in the world like New York pizza. As New York gentrifies up the wazoo and crumbles under the weight of a dysfunctional public transportation system, New York pizza is one of the few constants in our ever-changing city that we can rely on. While New York is impossibly expensive, its pizza is cheap. Unlike the plethora of gastro-pubs and "fusion food" restaurants that now infest the formerly-ethnic and once-upon-a-time-interesting neighborhoods of Williamsburg and Greenpoint and cater solely to rich white yuppies from the 'burbs, pizza is egalitarian: staffed by locals and enjoyed by construction workers and businessmen alike. The culinary trifecta of thin and crispy crust, sweet and savory sauce, and gooey and melty mozzarella cheese, gives sustenance to millions of New Yorkers daily and is a hallmark of New York life and culture.

There are some people who think that Chicago deep-dish "pizza" is better than New York pizza. These people are flat-out wrong. First of all, Chicago "pizza" isn’t even pizza. It is a gigantic calzone with sauce on top. There is WAY too much cheese. On any given Chicago deep-dish "pizza," there is always at least a one-INCH thick blob of cheese on it. Not only is this excess of cheese downright disgusting, it’s also a safety hazard as well. When rightly defending the honor of New York pizza against the abomination that is its Chicago counterpart, comedian Jon Stewart once remarked that he doesn’t want to drown in his pizza when he is drunk and collapses face-first into his pizza. Pizza's #1 function is to be hangover food. Any "pizza" that can't even serve its prime function without posing a LITERAL SAFETY HAZARD to its intended consumer(s) and surrounding passersby cannot be be considered pizza at all.

Did I mention that Chicago "pizza" has sauce on top of the cheese? ON TOP. Who came up with the idea of sauce being ON TOP of pizza cheese??? A two-year-old could tell you that the only correct order for pizza is crust on the bottom, followed by sauce, and THEN cheese. Add toppings if you must, but DO NOT mess with the bottom three layers of the pizza. Anyone who challenges the order of pizza-layering should be forever condemned to the 7th circle of hell. Or worse, be smothered under layers of gross blob-like Chicago pizza cheese for all eternity.

AND THE CRUST ISN’T EVEN CRISPY. Chicago "pizza" has DOUGHY CRUST. Any tried and true New Yorker could tell you that even charcoal-black burnt pizza crust is better than doughy pizza crust. The only possible way to eat Chicago pizza, with its doughy malleable crust and its gross globs of cheese, is with A KNIFE AND FORK. Eating pizza with a knife and fork is beyond evil. President Donald Trump eats pizza with a fork. THAT’S HOW BAD IT IS!!! Eating ANY pizza with a fork is bad enough. When your "pizza" can ONLY be eaten with a fork, there are no words in the English language to describe such an immoral travesty.

Chicago "pizza" is not only a bad food item. Chicago "pizza" is responsible for most of the problems currently ailing the world today. First, CHICAGO "PIZZA" CAUSED BREXIT!!! How, you may ask? Former British Prime Minister David Cameron made his decision to call the Brexit referendum in 2012, when he was EATING PIZZA at Chicago O’Hare International Airport. Brexit never would have happened without the infernal influence of Chicago "pizza."

The origins of neo-liberalism can also be traced back to Chicago "pizza." Milton Friedman and his Chicago School of Economics are the godfathers of neo-liberal economics. Likewise, they are the main people responsible for the right-wing shift in global politics that began in the late '70s to early '80s. They were based at the University of CHICAGO. This means that Milton Friedman and his buddies must have been eating way too much Chicago "pizza" when coming up with their ideas. Massive income inequality; declining and stagnant wages among workers in the West; the privatization of public utilities; the destruction of economies in the Third World; the rise of Trump and the far-right in America and Europe; energy policies that are putting the world on the precipice of environmental catastrophe; all of these things are the fault of Chicago "pizza."

Chicago "pizza" is one of the worst catastrophes ever to befall the entire human race. Few things have resulted in as much human death and destruction as Chicago "pizza." Also, it tastes gross. It is the moral imperative of all good and moral people to loudly proclaim the superiority of New York pizza over all other pizzas. Like Confederate flags and Nazi swastikas, the only place for Chicago deep-dish "pizza" is in a museum.