I knew them my whole life, but it wasn't until senior year that it just happened. 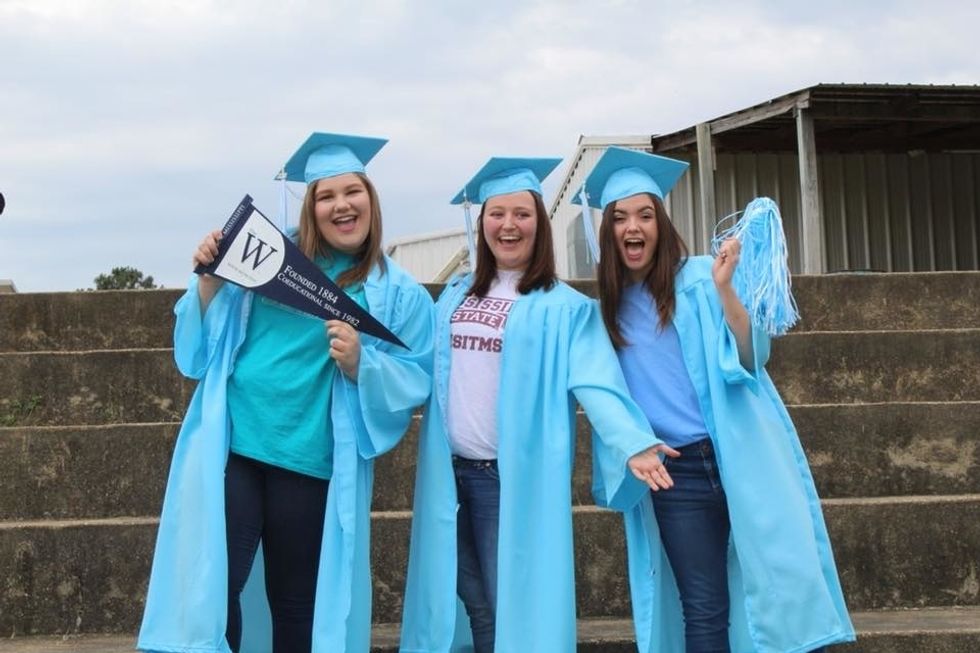 My school experience was relatively good.

I was blessed enough to have attended the same school with the same people since I was four years old. I went to Pickens Academy in Carrollton, AL. It ended up being one of the biggest blessings in my life to date. I've met many wonderful people, and made many friendships, but it wasn't until fall semester of my senior year until I realized who my BEST friends really were.

I was bullied in elementary school, but I believed it would get better.

In my school, the high school transition is literally no more than a walk across a short hallway. It happens in seventh grade, and it's a monumental time in a student's life. However, before junior high, I was bullied, and I faced some pretty tough stuff, but I had to believe it would get better. It wasn't sudden, but it did happen slowly overtime.

In high school, things got harder. I made cheerleading, and suddenly had a full schedule. I was transitioning between classes and just trying to survive, but things were getting better. I met great teachers and became friends with people I wouldn't have previously. We gained new classmates and began other extra-curriculars. Things were hard- I had underestimated the work load was extremely overwhelmed.

I got my license and I blossomed. I was driving to cheer practice, carpooling a childhood friends, cheering under Friday Night Lights, and more. I was in a band, I released my first CD, and I was making friends. High school was when things really began to look up for me, and I couldn't even imagine it being over!

Summer of Junior Year I thought my life was ending... it wasn't.

The summer of my junior year, my best friend in the whole world moved away. Her dad got a new job, and they moved 2.5 hours away. I literally thought my life was ending. I remember watching them drive away from their home in Aliceville and sitting in my car outside their house and crying although I knew they would be back only days later. I had thought that things were starting to get better, and little did I know, they were.

By the time senior year rolled around, I couldn't WAIT to get out of Pickens Academy. I'd been there for 12 years, and I was beyond done with the idea of high school. On the first day of school we had senior breakfast, and unlike most days I'd gravitated toward my normal friend group. I wasn't super close with them, but we were friends. It was that day that I realized who my true friends were, and whether we were going to get close or not was in my hands.

I made it my mission to become their best friend.

You could say that I tried too hard. I was good friends with a few people in the group, but others I just didn't really connect with as much. I had some preconceived opinions about a few people, and it turned out that they ended up being really great people. (Remember: I've known these people since I was 4-6 years old, we just never clicked) I sat by them in every class and interjected myself into their conversations. I made a point to be noticed and they accepted me right into their group.

I cheered with my best friend for years and never knew it.

My best friend- Makenna- cheered with me for years in the past. We were good friends, but had fallen apart due to some previous circumstances. We talked and cut up on the sidelines, but didn't really hang out beyond that. I began inviting her over and she did the same. We hung out with more of our friends at her house and went swimming. She came to my house between football games with another one of our cheer friends, and we became the best of friends.

Another one of my besties was in the band.

Katelyn- another one of my best friends- played clarinet in the Marching Pirate Band. (She's outstanding!) We were friends, but like Makenna and I, we didn't really hang out that much. We didn't realize how much we had in common until this year which is part of that reason, but once we started hanging out, we became best friends! Our shared love of Phantom of the Opera has brought us close together, and I'm so thankful for her friendship.

If you're waiting for friends... STOP! Go after them!

If there's people in your grade, classes, church group, etc that you want to hang out with, initiate some conversation! Talk to them and find some common ground! Help them with homework or show them an easier way to throw a football. No matter what you're into, find friends with a common interest- that'll make life so much more fun! Being shy like myself, taking the initiative was hard, and sometimes they even came to me when I felt like I was all alone. But if you're willing to give it a shot, a good friend will meet you halfway!