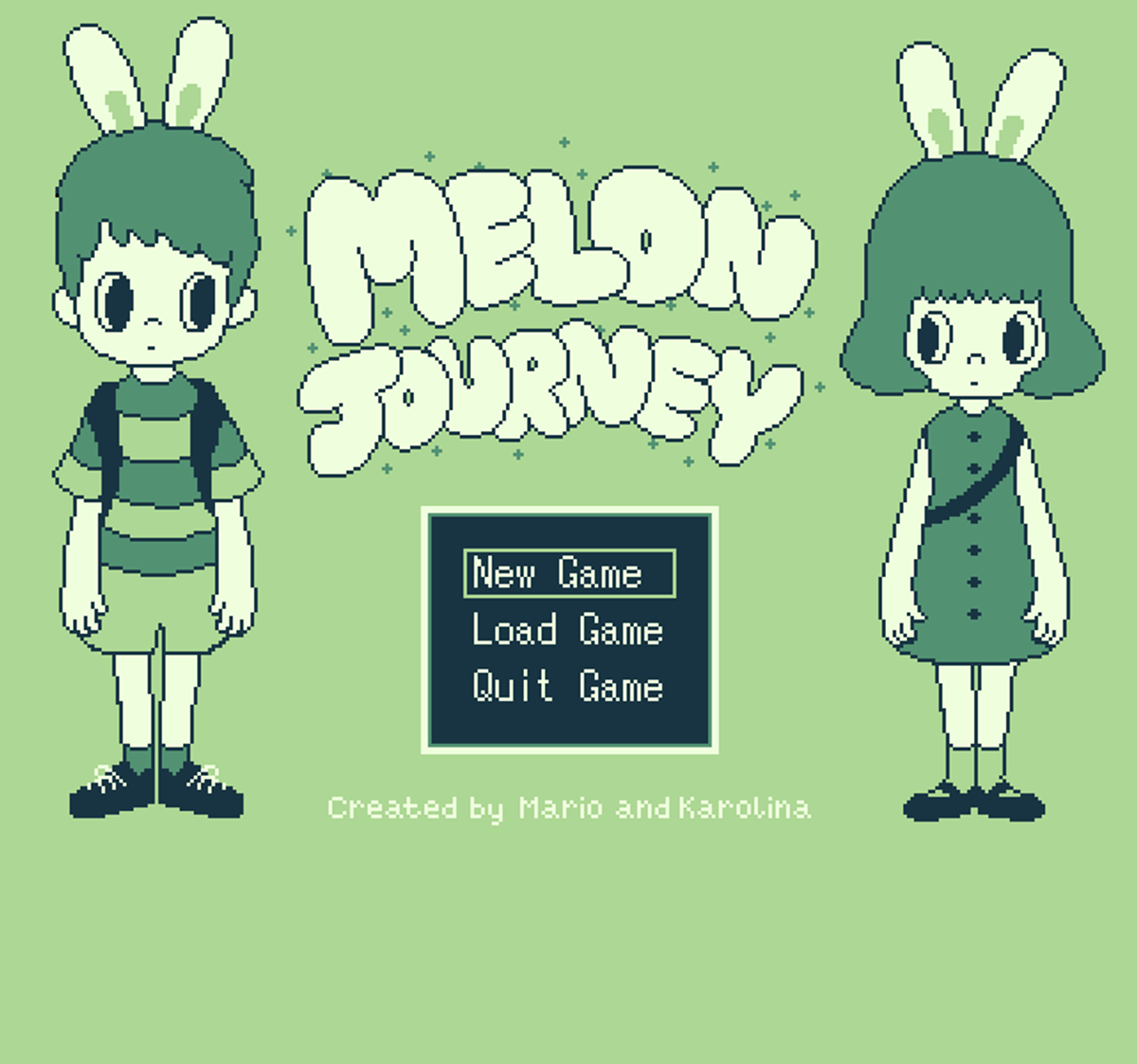 In this cute little indie game called "Melon Journey", a storm separated you from your friend, so you set off on a quest to find them.


This sounds good, in writing, but the execution of the plot in the game was less than thrilling.

Losing a friend in a storm is a very good premise, but you never learn anything about the characters. I felt no investment in finding the friend other than that I had to, to finish the game. I found myself caring more about trying to reunite an angry married hamster couple than actually completing the objective.

The ending also is really anti-climactic. You find your friend, and it's over. It is a very simple and cute game, but that’s no excuse for its lack of any real story.

I was initially drawn to this game because of its graphics, as I am with most games. It’s very cute, and the green pallet is easy on the eyes. It certainly does scream “melon” in its light hue. There isn’t any visual clutter which is nice, but that walks the line between simple, and boring. Occasionally there is something more visually interesting, such as a graveyard, mountains, or a Kitten Castle. But these are so few and literally far between that it leaves me wanting more, rather than just a wide expanse of grass sprinkled with trees and the occasional house.

Which brings up another issue, the houses and buildings have very little differentiation. Because of the amount of backtracking and detours I did around the map, I always forgot which house was which. As a result, I had to constantly go back inside or check the signs out front. This doesn’t sound like much of an issue, until you realize that’s the entire game. Some variation in the houses to identify them would have made it less frustrating.

Architectural diversity at its finest.

But, overall, the graphics department gets a pass from me because of how charming the art style is.

Alike to the graphics, the audio is very simple, 8-bit, and cute. However, the tracks are incredibly short. If I recall, the track that plays inside the buildings is only a few seconds long. It doesn’t matter how cute or nostalgic chiptune melodies are, I muted it after a couple minutes because the repetition was unbearable. I physically could not enjoy the music.

Also, there is a small section where a concert is being held. I was really hoping the music would change up, but alas it stayed the same.

That seems nice, if only I could actually hear it.


The title states that it will be a journey, instead it is a long string of meaningless detours. Character needs A from B, B tells you to get C, C requires you to get D, and so on. That is the entirety of the gameplay, confusing and tedious fetch quests. You walk around and click on things hoping that maybe whatever you have in your inventory will trigger the next detour to begin.

Sometimes it’s easy to tell what you need to do, such as when a character needed something to sew with, and I had seen earlier a man selling a sewing machine in one of the shops. Other times, it’s incredibly convoluted, such as a snow bunny refusing to get out of your path until you tell him a hamster’s secret. I went all around the map trying to find hamsters (since there are indeed a ton of them), but where is the key to this “puzzle?”

Inside of a coconut on the other end of the map. Because that makes perfect sense!

That is the game’s fatal flaw, and sadly that's all there is. Maybe it wouldn’t have been so bad if I could run, but the character remains at a staggering pace throughout the entire thing. The sheer size of the map and how much backtracking and aimless hunting you have to do makes you feel like a snail trudging through molasses. It’s not enjoyable when my fingers begin hurting from holding down the arrow keys for so long.


There isn’t much to say about the writing, mostly because there isn’t much of it. When you speak to an NPC, they generally keep it short, and there isn’t really any actual dialogue except for one or two moments nearing the end of the “journey.” Some of what the characters say is a little charming in how strange or whimsical it is, but that’s sort of a constant in indie games to the point where I don’t really count it as a plus anymore. It’s just something silly; not creative, silly.

My biggest peeve with the writing is how I thought some characters would have some bearing on the story, or give me their own fetch quest—since that’s the most you can look forward to—but no, they don’t at all. There was a little critter hunting for mushrooms, how cute, wish I could have helped him look for

some. And there’s a pig holding a misspelled sign advocating for the destruction of “cancer factories” that “cause death in hogs” which was adorable, but there was nothing more to the NPC than just that. And any characters that I found interesting, like Pup Star or the ghost hamster, are either never elaborated on, or are gone as soon as their bench quest is complete.


To this game's credit, I have to mention that it was created by two people in under a week. Just how much they were able to churn out in that amount of time is definitely admirable. But, this game was still a huge disappointment. Regardless of how short of time the game developers had to create it, it still deserves to be analyzed as the fully released game that it is. If only to understand how not to make a game.

But at least the art is cute.