Journ-Ice: A Journey Around The Rink

Journ-Ice: A Journey Around The Rink

My transformative experience in figure skating. 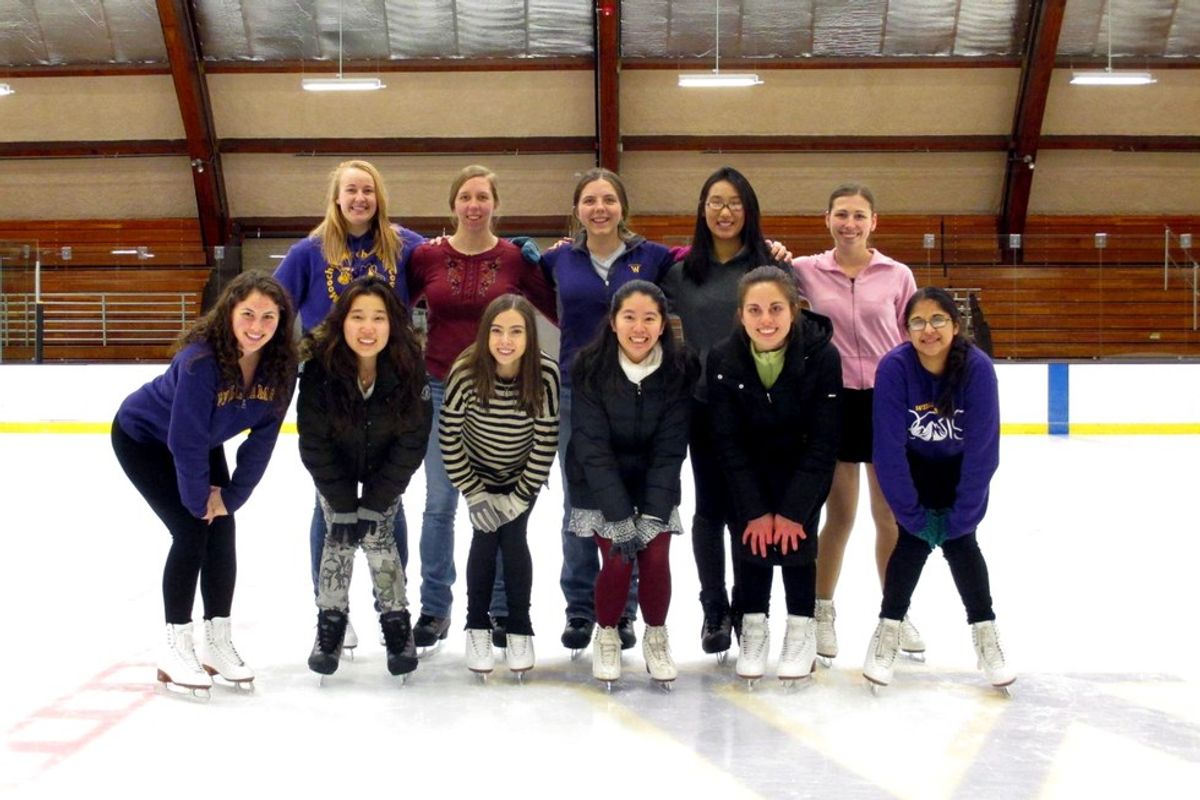 Winter study is a month of grace period between fall and spring semester. Because of the easy workload (only one class that's pass/fail), it's also known as a time to binge watch and sleep for 12+ hours.

But I made a vow to myself that I wasn't going to repeat my habits from fall semester. I was going to get my work done early and be more involved on campus activities... but where do I start? The campus was going to be as dead as the winter and most clubs were in a hiatus.

Then I remembered what my first-generation orientation leader said: "I didn't know how to skate before, but by the end of winter study I was able to perform in the Ice Show!" She laughed as she remembered slipping on the ice countless many times before she learned to balance herself. "You could be a complete beginner and join. I know I did and I still had so much fun during the show," she remarked. Hearing her story solidified my decision. My life as a proactive Williams student was going to start with figure skating (*cue dramatic music).

I literally stumbled into the first practice. I recognized a few familiar faces here and there (I was bound to; it's such a small campus). But I would have never guessed so many students could figure skate and do it so well too! They did tricks that professionals did on TV; it was like watching the Sochi Olympics again.

These afternoon practices livened up my week and prevented me from getting attached to my bed. The chilly rink atmosphere flushed my cheeks, letting me know I was alive inside.

Slowly but steadily I became more comfortable with the ice. Once I was not deathly afraid of belly flopping on the ice again (it shall live as a painful memory), I was able to let myself go. By the end of the month I learned a few basic tricks like crossovers and spirals.

A month is a short time to choreograph and practice performances for an hour long show. I was time and time amazed at the intricacy of the group performances that synced so well with the music. Unfortunately, absences made group practices much more difficult as we fumbled to fill in the empty spots. But we pushed through together during the last few days and skated as a cohesive unit.

There was little time for celebration because the Ice Show was just around the corner. Everything was in order, from costumes to music; even our announcers were pumped up and ready to go. The dress rehearsal was fresh in our minds; how different could the actual show be?

Then came the audience. More and more people began to trickle in and fill up the benches that were empty for so long. How many people were there? They hardly filled up a quarter of the benches but their excited chatters seemed to fill up the entire rink.

Many of my friends came extra early to wish me luck and expressed excitement over my part in the show. Some had a busy schedule ahead of them but made time to show me support. They genuinely cared about the Williams community at large and were interested in the efforts of small and dedicated groups on campus like the one I was in.

Now I knew for sure there were going to be many eyes watching my every move. I tried not to psych myself out, but my spazzing legs told me I was feeling the pressure.

Of course I knew we were bound to make mistakes... and we did make some here and there. What I didn't realize was how fun and thrilling it was to perform in front of so many people. Despite my shudders and one particularly noticeable fall (oof), I couldn't stop smiling. They were smiles emanating from my whole body that was feeling the blood rush even to my fingertips.

When I finally got off the ice after the victory lap at the end of the show, I was sorting through a peculiar mix of relief and sadness. Ah, this is exactly what you call bittersweet. Happy that the show finally happened but sad that this was it; I wasn't going to skate to Sir Duke again with my trio group in our fluttery dresses. Even if I do the show again next year, the performances that we practiced for so many times would only replay through the videos.

In the end I'm most grateful that I was on this figure skating journey. I made new friends, learned new skills, and experienced a feeling of accomplishment that I haven't felt so strongly since high school. Now I can dive into new experiences and feel comfortable with myself because I know I'm capable of meeting new challenges. Sure, figure skating and school work are not exactly in the same domain, but what I gained from winter study were newly gained confidence, determination, and self-awareness. I know that I can feel more engaged and dedicated to school activities in the coming semester--all because I spontaneously decided to join the figure skating club.

So when people ask, "What did you do during winter study?" for the next two weeks, I can say "Oh, I learned how to figure skate" with a knowing smile.