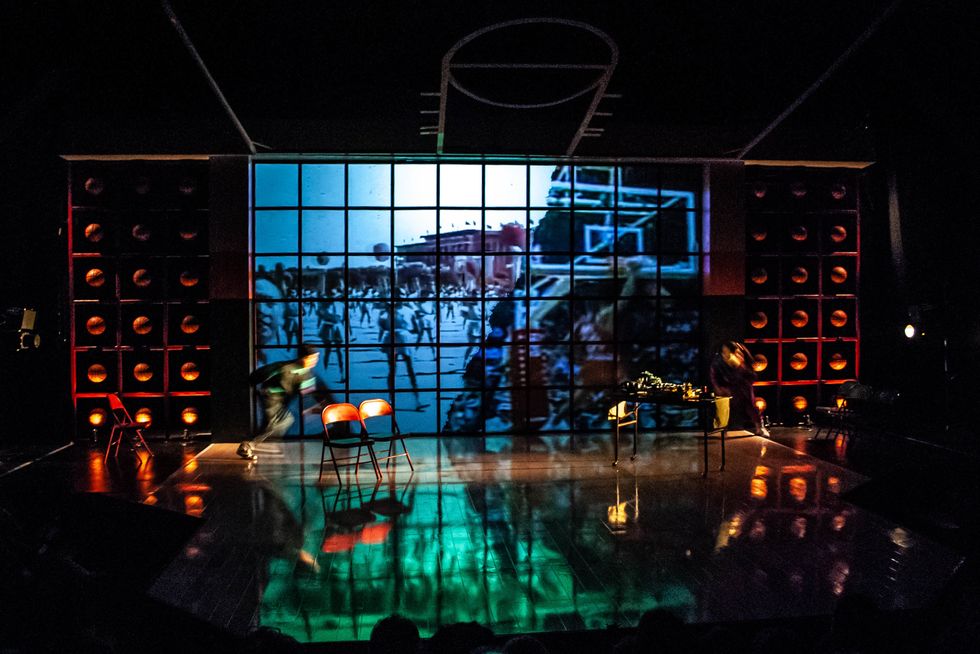 Yi-Chien's been designing a wide range of sets in the theatre performance art industry among America, Taiwan, and China. Her recent design projects to her credit: The Great Leap for Cygnet Theater; The Winter's Tale for The Old Globe; and Girlfriend, A Kind Of Weather, and Plot Points In Our Sexual Development for Diversionary Theater.

In this interview, she takes us down memory lane into the world of set design and walks us through the nitty-gritty of the system, exposing how a clever set can convey both the physical and psychological worlds of the play, and how equally innocuous details can completely change perceptions.

Why did you go into set design?

I fell in love with theater when I was a high school student. I saw Nine Songs by Cloud Gate Dance Theater and I was obsessed with how the performance could touch people's hearts. The set design for Nine Songs was sublime but also simple—it's poetry in motion. Not until I started to major in set design in college did I realize the set designer was Ming-Cho Lee, a magnificent set designer who shaped the set designers' world in America from the 1960s.

Since then, I'm obsessed with constructing the world for the story. Set design is a job that includes multiple disciplines. Every design approach is different and theater magic can happen in empty space, but I'd say always think about how to tell a good story with essential visual elements to add extra flavor to the performance.

You were influenced by the concept of multiculturalism. How does that affect you as a theater set designer?

Originally born and raised in Taiwan, a country that has been ruled by many different regimes in the past few centuries, I'm deeply interested in multiculturalism. You'll be surprised by the fact that various races all thrive on a small island. For example, my family can speak Hokka, Minnan, and Mandarin. It's fascinating to see how all the cultures merge into our daily life in terms of new food culture, religions, and aesthetics. And all those experiences have richly influenced my design.

I also have the chance to participate in international events and see artists from various cultural backgrounds. My work for Moon Drunk was selected in the Imagination Exhibit for the 2019 Prague Quadrennial which is the largest performance design event in the world and has been described as the Olympics or world's fair for performance designers. Being recognized as one of the distinguished artists encouraged me to keep exploring the relationship between culture, space, and time.

The most special experience is probably a Girlfriend in the Diversionary Theater. I love to design for musicals. It's a different process compared to play. For the musical, I usually start by listening to the music. In this case, I listened to Matt Sweet's album Girlfriend before I dived into the script. Knowing the texture of the music beforehand is essential when you read the play.

The music allows people's imagination to run wild—that's why we all love listening to music. I immediately fell in love with the music and the script, and the discussion with Director Stephen Brotebeck was amazing. However, I'd say sometimes it's more valuable trying the "wrong" path as well so we know better—okay, this design might be so beautiful aesthetically, but it won't serve the play.

Set design process is mutual cooperation. During the rehearsal process, I discovered more elements that could help the play. At the same time, the director and actor also get involved in your design. That's why I always say the tech rehearsal is the most magical moment because you can feel everyone grow and help each other, all together to create theater space that shuttles between reality and illusion, and leads the audience into the world of "Girlfriend".

I want to talk about two design projects I've undertaken—Mission Incomplete and Code: Cytus. Both projects refreshed me with how new technologies bring fresh possibilities in theater.

Mission Incomplete was presented by the minister of culture in Taiwan. We tried to use digital laser media to build the illusion in the theater. It was such a wonderful collaboration with lighting, sound, and set to create the space. In the past performances or exhibitions, there may be a few where laser light plays such a heavy role. With this adventure, we explore the advantages and disadvantages of new media, and I'm looking forward to our new project The End next year in Taiwan.

Code: Cytus was invited to the 2015 Shanghai Art Festivals. I really enjoy designing a piece that integrates multiple elements—musician, DJ, dancer, performance story protagonist on the one hand, and game task, audience interaction, dazzling stage effect, and stroke space-time clothing modeling on the other. My job as a set designer is like working in a gift shop: I try to find the best paper wrap and gift box for the large-scale cross-border piece so that there are always new surprises for the audience when they unwrap the gift.

I believe there'll be more possibilities in the future to use high-tech materials in theater and I look forward to that new theater revolution.

What is your final word?

I want to encourage them to be positive to reach out to any designer they admire. Be brave to ask for opportunities to work with designers in various industries such as TV, concert, or interior. Set a designer's career might start on a rough trail but getting to know people will widen paths that one can take.

Thank you so much! But how can you be contacted?