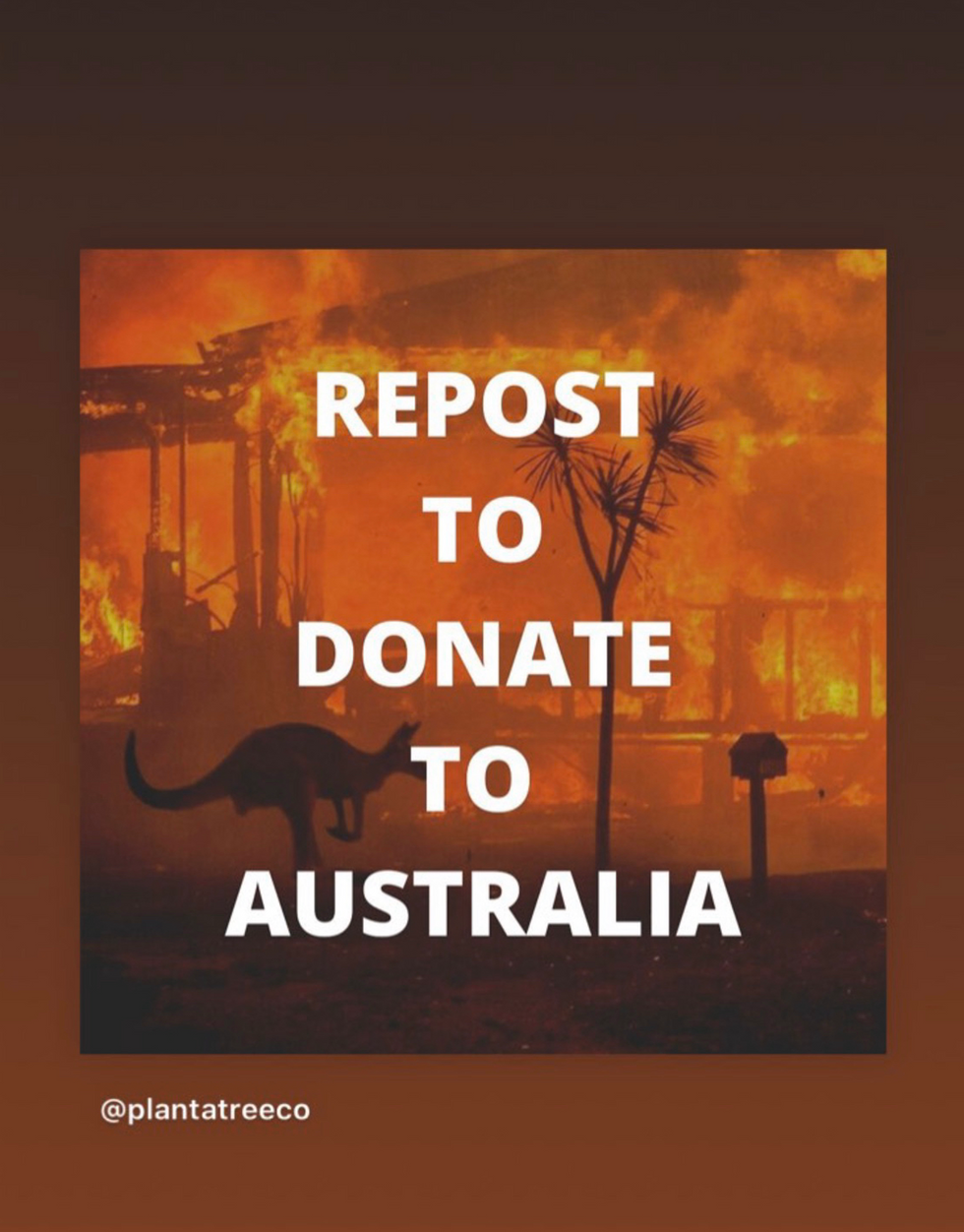 From the bleaching of coral reefs, to the destruction of the Amazon and now the burning of Australian brush. Various noble accounts on Instagram take their pledge to match x dollar amount to x shares/likes their post and account gets. But is it really that simple?

A recent post by Plantatreeco was posted claiming that for every repost they would donate 1 dollar to the organization of their choice. They later changed it to 1 dollar per 100 reposts due to issues with being able to match 130000 reposts. But there's a little bit more to this seemingly nowhere nothing "company" that makes such a claim.

The first noticeable problem with Plantatreeco on Instagram is their bio, which immediately brings you to their online store and sells cheaply made plastic bracelets that allegedly fund a planting of a tree. They're "originally" priced at $30, but are on "sale" for $19.95. Plastic bracelets for $20, even if it funds a planting of a tree, is a little bit suspicious already.

Even more so, when inquired about official statements to prove their company and that they plant trees, all they respond with is saying that their "goal" is either already met or almost reached on their instagram. No statements. No proof. No planted trees.

But it gets even deeper than that. The history of their account is a little rocky. In August they marketed again using the same tactics as last, but instead they used "The Amazon is On Fire" image instead of "Repost to Donate to Australia." After promising one planted tree per share on their post, they again never showed any proof regarding their endeavor.

Accounts like this have done this in the past, where they pose as this sort of noble charity organization with no history and a suspicious online store. When an Instagram post earlier in 2019 called HealthyOceans.co promised one like would equal one dollar to help trash be removed from the ocean, it went viral. Then went completely dark and changed their name and account to something else. The account has since been removed.

The same thing happened with the SudanMealProject. A huge account that sparked international attention that promised one like would equate to one donated meal to the humanitarian crisis in Sudan due to war.

Still not convinced? The profile picture that Plant A Tree Co has been used by several other scam accounts in the past. One would think a legitimate charity organization that can support thousands of dollars of donor matching would be able to create their own logo and brand right? Even their NAME isn't original. In may of 2019, an Instagram account of the same name called plantatree.ca tried doing the same scam that is happening now. It reached 16 thousand followers before going dark, deleting all of their posts and then losing 5 thousand followers.

Currently sitting unverified at 581k followers but able to sponsor businesses on Instagram plantatreeco pledges one dollar per one hundred shares to the New South Whales Rural Fire Service. But the organization has yet to even follow them back.

Donate directly to verified organizations that have listed donors and proof that they directly support their crisis of choice. Donate to government sponsored organizations like the New South Whales Rural Fire Service DIRECTLY. Because while all these accounts may seem to be the progenitor of good in the world, they're mostly all financial scams to get money from you.

If $20 for a $1 bracelet goes towards planting a tree, what is my one share going to do? Why is it they ask for shares and likes? Because followers on Instagram is worth literal gold. The more people who follow you, the more revenue you have the capability of generating through either selling the account, marking sales, branding or selling items. Higher the engagement. More mulah.

If any of this hasn't convinced you yet, just look at their story as of January 11th.