"If this is life, then drive it like you stole it."

"If this is life, then drive it like you stole it." 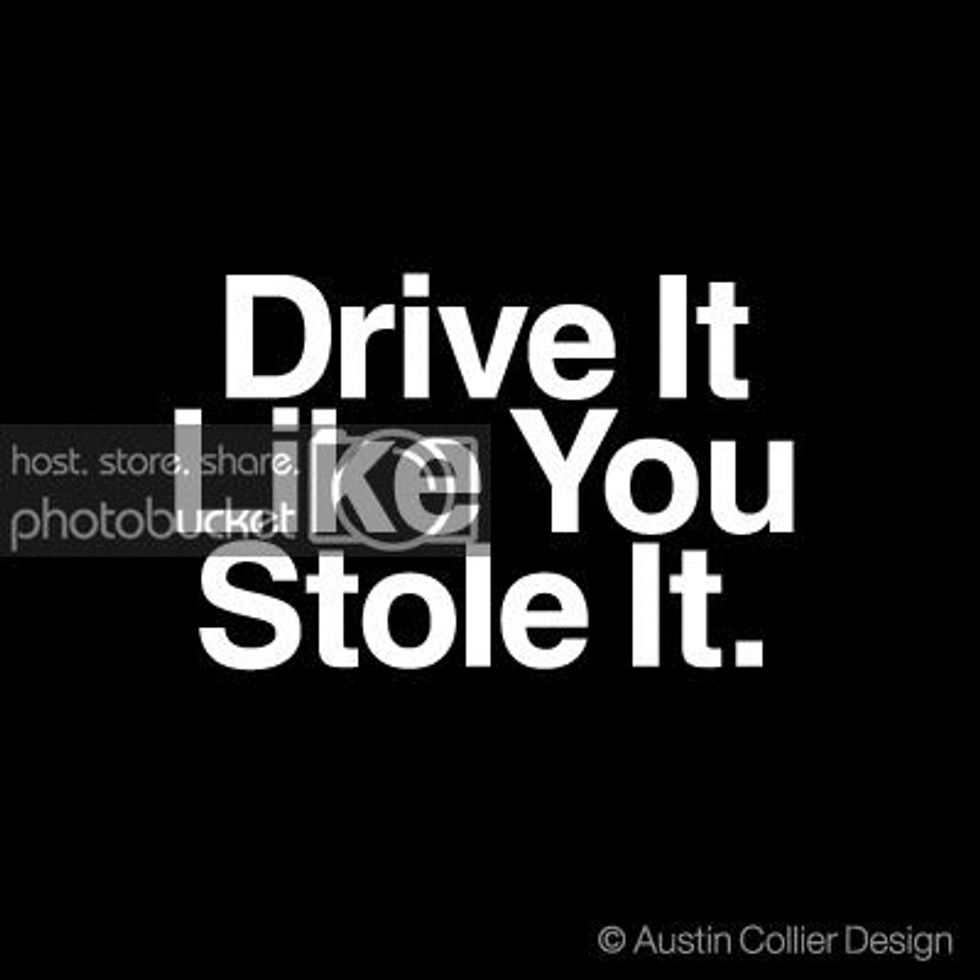 In my life, as I am sure with pretty much every other being who has had the privilege to be a part of a species that thinks fighting with each other can resolve issues of where to find food and water and how to share it equally, I have felt a great deal.

My life has crashed and burned before my eyes, walking through the ashes the morning after with my skin still stinging from the flames; my life has also seemingly soared and flown on the back of an angel's wings, a smile creeping across my face as I realize how truly beautiful all the colors of the sunset are. I have wept for both what I've lost and what I've found and smiled with both pain and pride; I simply dreamt far too many dreams and lived out far too few. I have been full of love, and full of hatred. My heart has been both broken beyond repair and warmed to the point where my eyes were "sweating."

I know I probably sound like an idiot for saying all of this, as I have only been a participant in this thing we call life for all of nineteen years. Yet, I firmly believe that every human is endowed with the capability (and the right to, for that matter), to reflect, to look back on what they've done and how they did it and attempt to learn a thing or two from the process. This was something I spent a lot of time doing this as I spent a total of 36 hours in the car, trekking from Naperville, Illinois to Miami, Florida with my family. I would put on a sad song (typically by either Beach House or The Smashing Pumpkins) and stare out at the blurriness flashing past me, a dismal watercolor of Baptist billboards and washed-up rest stops that never seemed to differ and think of all the things I should've done.

It does no good to dwell on the past. Ever.

I got back from my trip and remember crawling into bed, not really feeling much of anything but this emptiness that had come from all this melancholy traveling. I just wanted to sleep and wake up the next morning hopefully feeling a little better in knowing that I would be really be back home in a matter of a week or so. I typically fall asleep listening to very soft music and try to sync the rhythm of my breathing with it, but I was so exhausted from doing nothing but think all day that I forgot to grab my wireless headphones from my backpack before climbing into bed, and I didn't really feel like pulling myself up to go and get them. So, I just lied there in silence, feeling rather odd about everything.

I started to think again. To reflect, rather.

Only this time, it was different.

It was different because I realized that all the things I should've done, I never actually did, because they weren't meant to happen.

Everything (and I know this sounds cliché) happened the way it did for some sort of overarching reason, probably one that I couldn't (and maybe still don't, who knows?) understand despite all the time I spent being sad about the past in the car.

I wasn't meant to succeed as a biological researcher because words flow out of me like water racing down a gutter during a monsoon, because I see things I can't describe in the way things are written and in how they make me feel. I wasn't meant to stay friends with them forever, or live with her next year, because I have sisters out there just waiting for me to come home (and I did, for that matter, and it's a beautiful thing), and because I am supposed to want to embrace my "best friends" when I see them walking to class instead of run away and hide in Cudahy Hall. I wasn't meant to be with him because I had to learn how to love myself before I could love someone else, because I really need to turn the volume down on everything else and hear the music in the way I speak before pressing play again. I wasn't meant to stay healthy all semester because sometimes I need a wake-up call, because I must realize that although calories are a necessary part of life, they do not define the whole of life itself.

(Because in all seriousness, I kind of did. The odds of any of us even existing in the first place are crazy low.)