After years of drugs and memes, his story gets a happy ending. 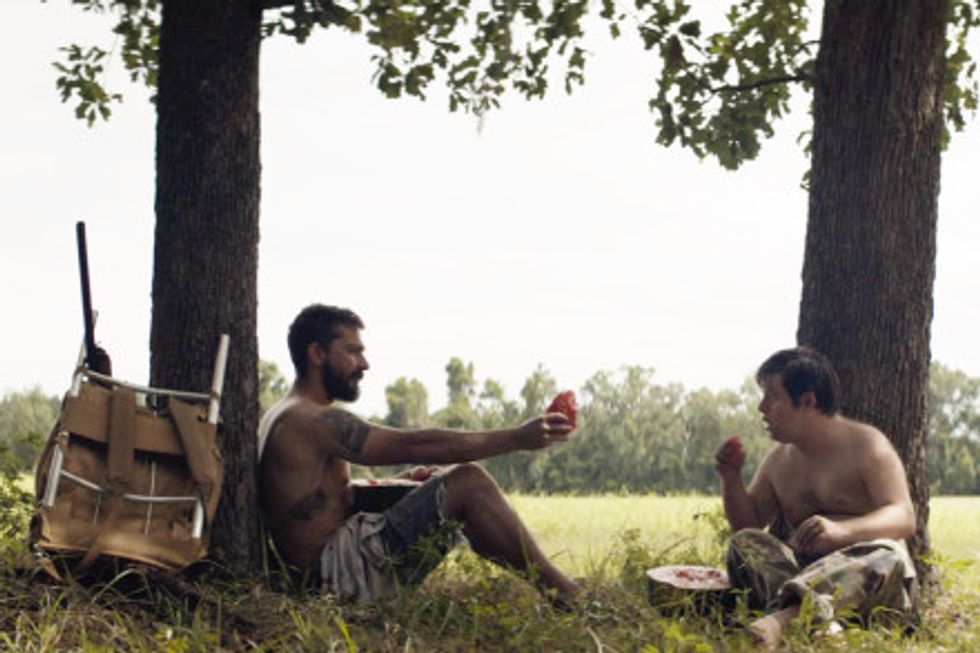 If you were never a fan of Michael Bay's Transformers, I'm sure the name "Shia LaBeouf" still somehow found a way to trickle down into your attention. Maybe you loved Even Stevens as a kid or recognize him as the worst character from the worst Indiana Jones movie. Or maybe it was the sensationalized arrests, drug trips, and high octane memes swarming Labeouf's reputation that have cemented the troubled actor's name in your mind.

But whatever the case and whatever your previous judgements of him may have been, nostalgic or baffled or completely disillusioned, I think it's safe to say that we can all wish Shia a warm welcome home! after his phenomenal return to form in this year's The Peanut Butter Falcon.

Directed by Tyler Nilson and Michael Schwartz, this Twain-esque comedic adventure may track a well-worn, simple plot, but its beautiful cinematography, lush soundscape of the backwater South, and charming, heartwarming characters creates an overall experience that is altogether earnest and sweet. In other words, while this is a straightforward, perhaps even predictable film that hardly says anything that you haven't already heard a thousand times before, it says these old thematic adages so gosh darn bless-our-hearts sweetly and with such plain charm that you can't help but crack a smile. Perhaps it's audiences' annoyance with the artifice of other films, trying and failing to create something overly complex and topheavy with faux-philosophical loftiness, that makes the charm of this plain Jane, entirely too familiar plot so likeable this go-around. That's about the best I can do to explain the soul of The Peanut Butter Falcon, a spirited snapshot of a modern Huckleberry Finn that's all heart and owns it.

The relief of LeBeouf's performance in the film, however, requires no explanation. Simply watch a scene of LeBeouf from Nilson and Schwartz's adventurous comedy-drama, any scene from any part of the moment, and you'll hardly be able to recognize this thoughtful, relaxed, and wisened young man as the screaming, coked-up meme generator that we all feared would fall over dead from a drug overdose just a few years ago. Love it or hate it, the experience of working on The Peanut Butter Falcon and writing the film Honey Boy, by LeBeouf's own admission, saved the actor from a tailspinning career and personal life and provided a cathartic outlet for him to recollect himself, reflect on his experiences, and ultimately set out on the path to recovery. In fact, LeBeouf's performance for The Peanut Butter Falcon and his scriptwork for Honey Boy were actually done during during his court mandated rehabilitation program, and the impassioned actor actually extended his rehab just to be able to finish up with the Nilson and Schwartz.

Now, if you're a little curious as to what all this sudden talk of Honey Boy is about, oh man, you are in for a treat. This film is an autobiographical piece that captures Shia LeBeouf's experiences as a child actor and his relationship to his rodeo clown father, played by Shia LeBeouf himself. That's right. Not only did LeBeouf pour his heart and soul into the writing of this deeply personal project, but he also took command of its direction yet again by playing the role of his own father in this upcoming biopic.

True, while the film hasn't been released to general audiences quite yet and I myself haven't seen much beyond general news and the newly released trailer, we all have to admit that this project takes guts and hopefully shows that LeBeouf has finally climbed up to a point in his life where he is comfortable enough with both himself and with where he has finally arrived in life to be able to share something so close to his heart with the public.

Thus, as I finally spiral down to my point, I ask that we all keep in mind both The Peanut Butter Falcon and Honey Boy, as well as, noting LeBeouf's other indie projects in recent years, and find it in our hearts to create a space for celebration and relief at the fact that this troubled actor has finally found himself after years of harrowing drug and psychological issues. Just as The Peanut Butter Falcon managed to pry some warmth from my cold, critical heart, so too does this Hollywood redemption tale give me a little something more to celebrate in the world. So welcome back, Shia. Welcome back.