Fly-Over Country: The Backbone Of America

The stories, the dreams, the beating heart of America. 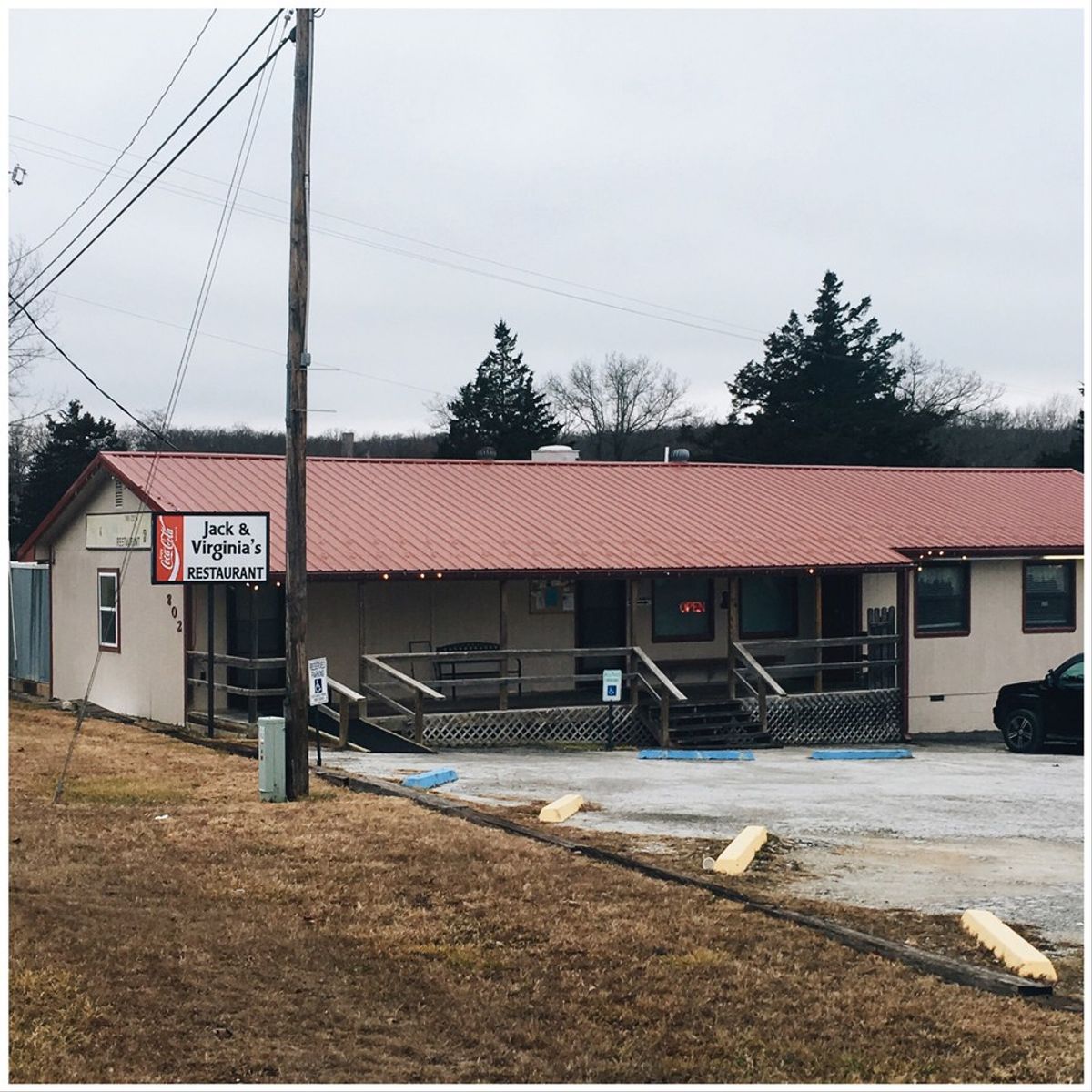 It’s January 3rd, roughly 8 am, near the middle of nowhere, Missouri. The temperature is pushing around 25 degrees; this is a heat wave compared to the bitterness winter was punishing us with so far. The sun is shining, you can see your own breath, and there are roughly 165 miles between these desolate, frozen cattle pastures and the gleaming lights of civilization. Not surprisingly, this silent beauty was soon disrupted by yours truly. Anyone who knows me can tell you honestly that I turn into a raging monster the minute I become hungry. It became very apparent that we needed to make a breakfast stop, and it needed to happen fast.

We happened to be near Hermitage, Missouri, when a neon sign caught my attention. “Jack and Virginia’s Restaurant, it read, right across the way from the “Hickory County C.A.R.E.S. Thrift Store”. The parking lot was filled with big trucks and old Buicks, which generally means that cowboys and grandmas ate there. That also meant that it was probably stellar.

We walked in the door, and a few things immediately stood out to me. First of all, there were very few decorations. It was a very simplistic setup, with white walls, dining room styled tables, wire chairs, old fans and light fixtures, and thin curtains on the several windows that lined the wide walls. Secondly, I was the youngest in the room by probably 40 years, with one or two exceptions. Thirdly, it smelled amazing. I was practically drooling. Finally, it was silent, in the sense that there was no music playing. The only times a tune sounded while we were there was when the waitress’s phone rang, and then a polka song rang through the building.

The only waitress scurried out of the kitchen in an old U.S. Navy t-shirt, jeans, and tennis shoes, and urged us to grab a seat. As we took our seats and settled in, she brought out coffee and water and began explaining her specials that day. She was surprisingly articulate, showing an impressive balance between her obvious curiosity about who we were and yet remaining pleasant and professional. After taking our order, she walked about the restaurant, taking orders and talking to the customers.

As she talked with each person there, I noticed that not only did she know every single person’s name, she knew their lives. The three old men in the back-corner drinking coffee talked about their grandkids and she congratulated them on their grandchildren being accepted to college, one as a first-generation student. She made her way to the couple in the middle of the restaurant and enthusiastically congratulated them on their 65 years of marriage, which they were celebrating that day with a big breakfast and a bouquet of roses. The two middle-aged men to the left of our table started discussing the cattle industry and the puppies their wives brought home without warning, and she jumped in and offered leftover ham for the dogs with a sly smile. When the petite elderly woman directly next to us who was eating alone began talking with the waitress, it was clear they were old friends, and the topic shifted to the waitress’s baby. As the old woman paid for her ticket, she pulled out a little onesie she had sewn just for the baby, and tears filled the waitress’s eyes. I was shocked. Not only did these people know each other, but they cared; they loved each other.

And then something hit me.

There is a spark that still smolders in mid-America. I saw it as I watched the old boys laugh in the corner at old stories. I saw it as I observed the waitress bussing tables and spreading smiles as she made a living to support her daughter’s future. I saw it as I watched the ranchers swapping cattle jokes and talking about vet bills. I saw it as the couple celebrating 65 years of marriage helped each other put their coats on and he still held her hand and made her chuckle as he tickled her while they were leaving the restaurant. In the creases that line the faces and hands of everyone there, the harsh, hard lifestyles of ranching, farming, harvesting, building, and constructing are made manifest. In those same creases, however, something is even more apparent. There is a hope for tomorrow, yes, but there is a rejoicing in today.

When you think about people and politics, you think of the hustle of Kansas City, Chicago, New York City, D.C., and wherever else civilization thrives. You get out here, out in the woods or the deserts or the prairies, and this is what it is all about. This is what America is – this is what we have always been. A people – one people – under the concepts of freedom and unity who take reality by the reins and brave countless challenges to flourish and strive for success. Mid-America and her heroes are overlooked, even though they are all of us. The ranchers, the farmers, the small businessmen and women, the families, the workers; they are the backbone of America. The fly-over states that are so easy to look down upon and ignore because of their lack of glamor and absence of shopping malls are what makes this nation what it is. The values of America – the traditions of this great nation – are rooted in the very states and people we tend to overlook the most. Hard work, kindness, humility, and unity is what Mid-America is all about.

Next time you scoff at the mention of a fly-over state or put yourself in higher regard than those who built this nation from the ground up, take a second to think about that waitress in the little restaurant in small-town Missouri, making a living for her daughter and rejoicing in the daily. Before you debate me about the how the hardworking, tradition-soaked south, the vibrant west, or the exciting east is so much better than the Midwest, I am not disagreeing. Each region and its people are unique in their own ways; however, as the heart of this nation beats in the Midwest, so does this nation stand and function because of the backbone that fills the center of this nation.

Mid-America is a breath of fresh air in a stale nation. Breathe it in. Exhale it out. And go forth and do great things. Appreciate the little things. Watch the sunset over And next time you want a taste of reality and what the backbone of our nation looks like, make your way into a flyover state. You will not regret it, I promise you.