A young man finds himself in a city, and there is something sinister hiding in the shadows. 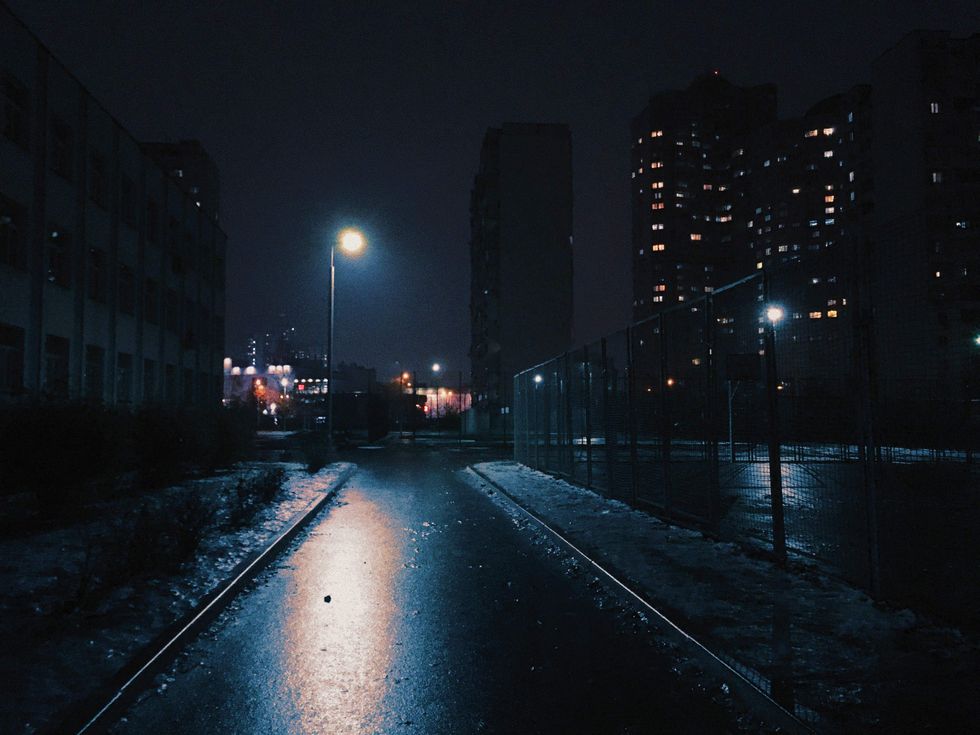 Photo by Igor Karimov on Unsplash

As the sun dips below the distant horizon, the moon rises to make its presence known in the darkening sky.

Its shadow paints the city below in shades of black and blue, almost like the whole city is bruised and no one cares to cover it up. Lights flash as cars race along rain-soaked streets, water splaying about with each passing one. On the sidewalks, people walk by building after building at a brisk pace that suggests that they all have someplace to be, someplace far from wherever they came from.

Among them is Lucas Morgenstern, head hung low whilst he weaves through the bodies.

His hands are buried deep within the pockets of his jeans, his gaze fixed on the seemingly never-ending sidewalk that stretches out before him. He's never liked the city all that much.

Lucas looks up to see a teenage boy headed straight for him on a skateboard. He steps aside just in time, the skateboarder's sheer force nearly knocking him backwards on its own as he zooms past. In the instant he passes him, he swears he sees the little brat flip him off. Then he blinks, and the kid's gone. A scowl forms on Lucas' face.

He doesn't mind the city. What he hates is the people.

Lucas resumes walking, once again avoiding eye contact with the passerby that surround him at every turn. A remnant of the afternoon downpour drips down from an overhanging structure and lands atop his head, sliding down a strand of dark hair and onto his cheek. He gingerly reaches up and wipes the droplet away with a swipe of his hand. Annoying. That's the word that rests on the tip of his tongue, just waiting to be uttered.

Everything-the people, the rain, the ever-present sound of bass-boosted music blasting from what feels like every direction at once-is annoying.

They are blips in a path from Point A to Point B, from life to death. Sometimes he wishes that he could disappear from this world. It all would be much less of an annoyance if he was merely an observer on the outside looking in.

The way he sees it, the world is like an abstract painting.

It's pretty if you squint at it, but the closer you get, the more messy and confusing it becomes. Pretty soon, all you can make out is a bunch of nonsensical scribbles.

Whoever painted it, Lucas thinks, must have done it as some kind of sick joke. He wonders if the bastard's laughing now.

With a sigh, he lifts his head to stare up at the sky above. It's dark, not a star in sight. Fitting for a city paved in tragedies, no one has the guts to talk about in voices louder than whispers. Hushed voices creep up on him with every step he takes.

He can't make out what they're saying, but what he can gather is that it's something he isn't meant to hear.

Right. He needs to stay focused. He didn't choose to come here for fun. He's in this accursed city for a reason, and as he rounds one last corner, he realizes he's found that reason at last.

The building that looms over him-an apartment complex, it seems- stands out in the crowd of many with its chipped paint and flickering lights. Every other building appears to be teeming with life, as is expected in a bustling city.

This one looks completely abandoned. It's the odd one out.

Lucas casts cautious glances at those moving past him and takes note of how they all very pointedly avert their eyes from the building in question as they pass by. It's almost like it's cursed somehow.

A grin slithers across Lucas' face. Finally, he muses to himself, there's something interesting.