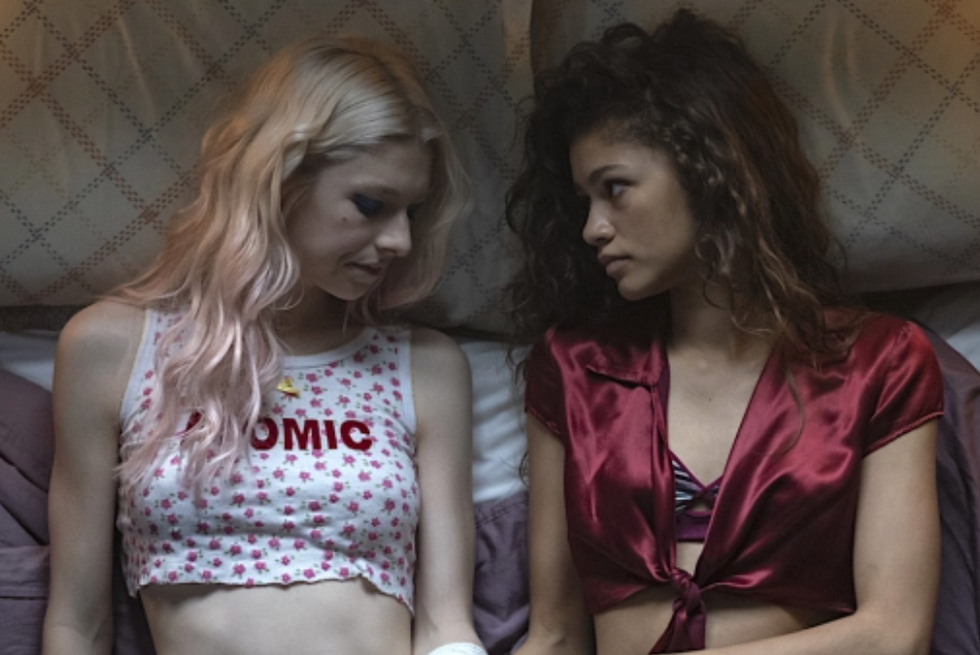 Don't allow the over-the-top fashion and gem embellished makeup distract you from the portrayal of real-life issues such as substance abuse, mental illness, and violence. *Spoiler Alert* In the cliffhanger season one finale, Rue returns from a situation in emotional distress and relapses

Season two was originally scheduled to release in the summer of 2020, but filming was rescheduled due to social distancing guidelines. Zendaya disclosed to Variety, "We were supposed to go back to work, I believe, on March 16. And literally, three or four days before that, they were shut down. I was like, 'I was so close.' We did camera tests and hair and makeup tests, and we got to see everybody and we had the sets built."

One week ago, Zendaya make a special announcement on Instagram that excited Euphoria fans after a year's wait. She posted a close-up image of her reflection in Hunter Schaeffer's eye, and captioned it, "We really missed them. Two special episodes coming soon. First one December 6 on HBO."

Since the season one finale was released more than one year ago in August 2019, two episodes are scheduled to bridge the gap in the plot and provide fans with a refresher before the highly anticipated release of season two in late 2021/early 2022. HBO's Casey Bloys calls the premiering episode a "special COVID episode," in his interview with Deadline.

The first episode titled "Trouble Don't Last Always" will premiere on December 6th, 2020. Unfortunately, HBO has not released any information regarding the second bridge episode as of now.

Here's What We Know About The Bridge Episodes

It has been confirmed by Sam Levinson, "Euphoria's" creator, that Rue did not die in her relapse from the finale. In an interview with Hollywood Reporter, he remarks, " I think that there's a lot more to delve into and unpack in terms of the effects of addiction on Rue and on her family and those around her. The possibilities are endless in many ways."

What is the Plot of Season Two?

In terms of the plot of "Euphoria" season two, details have not been shared with the public.

In an interview with Variety, Jacob Elordi said the show's creator Sam Levinson is "Changing scripts like a madman. I could tell you something now, and it would not be at all relevant to what I'm going to read when we go back. It's ever-changing, even up until the day that we're shooting."

Who Are The New Characters In Upcoming Episodes?

The season two casting call has revealed the new characters in the upcoming Euphoria episodes who go by the names Darian, Ray, Ami, and Serena.

When Is The Euphoria Season 2 Release Date?

Due to COVID-19, Euphoria's production was put on hold. It has been estimated that season two filming will resume in early 2021 and will premiere late 2021/early 2022.