Honestly, I Don't Give A Flying Fuck About The Flag And Neither Should You

Honestly, I Don't Give A Flying Fuck About The Flag And Neither Should You

Don't let this distract you from real issues. 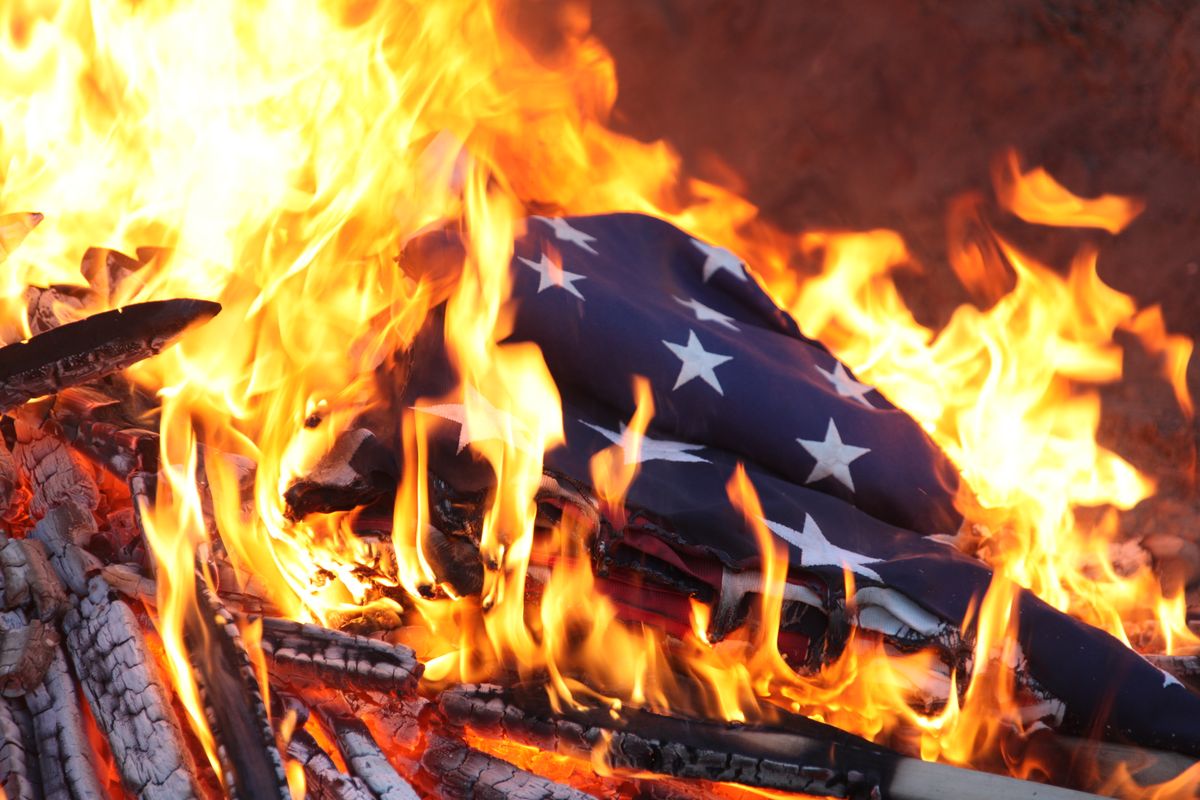 While campaigning in Alabama for ex-Senate candidate Luther Strange, the 45th president of the United States randomly weighed in on the topic of NFL players not standing during the national anthem.

“Wouldn’t you love to see one of these NFL owners, when somebody disrespects our flag, to say, ‘Get that son of a bitch off the field right now. Out! He’s fired. He’s fired!’” the president said.

“You know, some owner is going to do that. He’s going to say, ‘That guy that disrespects our flag, he’s fired.’ And that owner, they don’t know it [but] they’ll be the most popular person in this country.”

Then, all of sudden more players were kneeling, their arms locked together in newfound solidarity, even the owners, to protest the president’s rant.

It is unclear, however, if the NFL team owners were on the field demonstrating because they were against the president and ready to end their silence. Or, if they couldn't let the good publicity (and the financial futures of their teams) slip by them.

The latter seems more likely as a number of NFL owners donated, in total, 7 million to the president’s political campaign. Robert Kraft, the owner of the New England Patriots, just this summer, gifted a Super Bowl ring to the Commander in Chief.

Unsurprisingly, the comments made that night changed the conversation from police brutality and systemic racism to respecting the U.S. flag and this country’s national anthem. Many people forgot the true reason behind the recent surge in athletes refusing to stand for the national anthem, all initiated by Colin Kapernick during President Barack Obama’s last months in office.

So, as a result, the U.S. flag is, once again, a hot-button issue right now.

The first U.S. flag was designed in 1777 and it has been changed over 25 times since. The design with 15 stars and 15 stripes is what inspired the writing of the U.S. national anthem by Francis Scott Key. It was not until 1860 when the flag became symbolic of nationalism, due in part to Robert Anderson, a Major during the Civil War.

“Before that day, the flag had served mostly as a military ensign or a convenient marking of American territory, flown from forts, embassies, and ships, and displayed on special occasions like American Independence day. But in the weeks after Major Anderson's surprising stand, it became something different. Suddenly the Stars and Stripes flew — as it does today, and especially as it did after the September 11 attacks in 2001 — from houses, from storefronts, from churches; above the village greens and college quads. For the first time American flags were mass-produced rather than individually stitched and even so, manufacturers could not keep up with demand. As the long winter of 1861 turned into spring, that old flag meant something new. The abstraction of the Union cause was transfigured into a physical thing: strips of cloth that millions of people would fight for, and many thousands die for.” – Adam Goodheart.

The flag has been so revered that it carries with it a Flag Code, a set of guidelines for “respecting” it, created June 14th, 1923 by representatives of the Army, Navy, and other national groups. A few years later, in 1942, the code became law.

Examples of the guidelines:

—The flag should not be used as "wearing apparel, bedding, or drapery," or for covering a speaker's desk, draping a platform, or for any decoration in general (exception for coffins).

—The flag should never be used for any advertising purpose. It should not be embroidered, printed, or otherwise impressed on such articles as cushions, handkerchiefs, napkins, boxes, or anything intended to be discarded after temporary use.

—The flag should never be fastened, displayed, used, or stored in such a manner as to permit it to be easily torn, soiled, or damaged in any way.

It wasn’t until 1990, with the Supreme Court case of United States vs.Eichman, that it was deemed unconstitutional to impose criminal penalties for desecrating and/or “disrespecting” the flag.

Even though it is within any person’s right to do whatever they want to the flag, there is public outrage when the flag is not given the “respect” people feel the cloth deserves. Interestingly, when the Confederate flag —created with purposeful opposition to the U.S. — is paraded about, those same folks, so devout to their county and their holy patriotism, are silent.

Take NASCAR, for example. Various team owners let it be known, without hesitation, they would fire anyone that dared to disrespect the national anthem, and, by extension, the U.S. flag.

“Anybody that don’t stand up for that ought to be out of the country. Period,” Richard Petty, team owner, said. “If they don’t appreciate where they’re at...what got them where they’re at? The United States."

Another NASCAR owner, Richard Childress, had this to say:

“Get you a ride on a Greyhound bus when the national anthem is over. I told them [his “employees”] anyone who works for me should respect the country we live in. So many people have gave their lives for it. This is America.”

The very vocal owners are conspicuously quiet when defending the U.S. flag intersects with condemning the Confederate flag. It isn't banned on speedways nor has it been as vehemently denounced as the recent peaceful (and ineffective) protests.

Some tracks simply gave fans U.S. flags in exchange for their Confederate ones.

The idea of what is respecting the flag and what is disrespecting is incredibly biased. There are so many more pressing issues at hand than this flag debate, such as the fact that Puerto Rico is in dire need of aid from its government — the United States; the lack of leadership and professionalism in this current administration — exemplified by its head; Betty DeVos, the Secretary of Education rescinding university guidelines for campus rapes and sexual assaults; or, the issue that spurred all of this — systemic racism