Dancing Is My Life's Passion

Dancing Is A Weight On My Shoulders, But It's Worth Its Weight In Gold

Here's to all the late nights and makeup wipes. 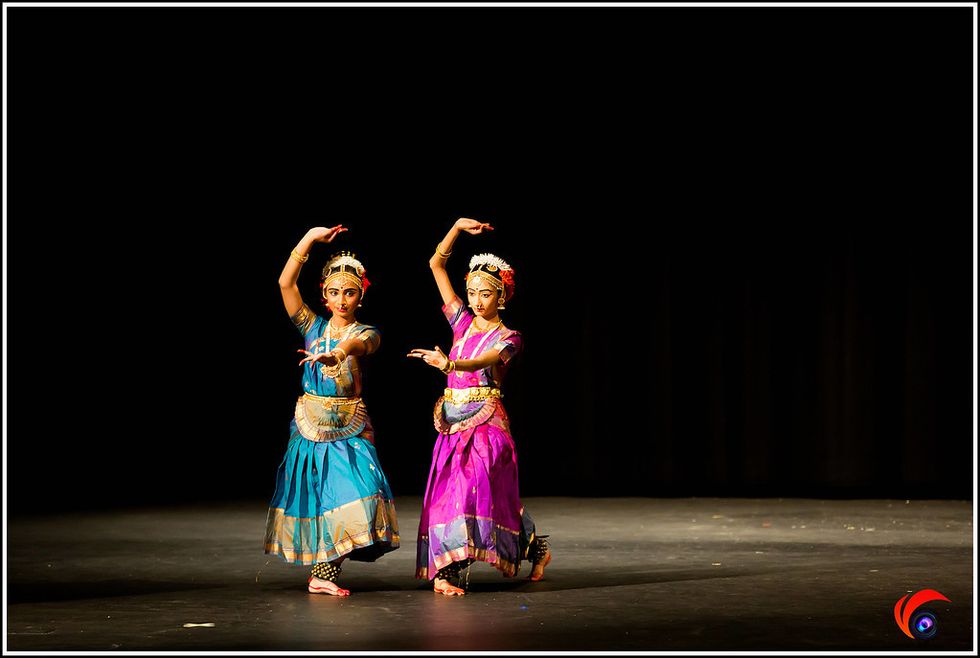 Everyone has their passions, whether it be singing, cooking or playing a sport. For me, it's always been dance. I've been dancing for basically as long as I can remember. My mom signed me up for my very first traditional Indian dance class when I was merely four years old. To say the least, I was a nervous wreck. Now, I'm approaching my 13th year of dance. And there's so much I have to say.

I remember back in elementary school. I had only been doing dance for a few years, but I was moving at an extremely fast pace. My teacher put me with students at a much more advanced level, and I was struggling to keep up. On performance days, I would find myself lagging behind or forgetting the steps easily, as they were too complex for me to understand. Some days, I would stand in the back of class, trying to hide myself in hopes of no one noticing my incompetence.

Some days, my teacher would drag me to the front purposefully. She says it forces you to pay attention and work hard, but on almost all the days, I felt inferior to the girls around me. I felt I could never be as good of a dancer as they were. I felt no matter how hard I worked, they would always be one more step higher.

Rather than it being a supportive dance group, it turned into a competition of "who is the best?" On multiple occasions I thought about asking my teacher about my placement and if I should drop down. But I couldn't give up.

And so I worked hard. I came in for extra sessions to catch up on steps I couldn't quite understand, but at last (fast forward years later), I progressed higher and higher up the chain of "levels" until I had finally reached the top and there was basically no where "higher" for me to go. Unless, I was the teacher of course.

And so, yes, I became a teacher.

I finally felt that I had become a proficient dancer. I could now confidently stand in the front of class without worrying that the girls behind me may be judging me. I could perform solo pieces in front of the class and be able to focus on my true expression rather than whether or not everyone else thought I was good or not. I may not have been perfect, but I had definitely worked hard and my technique had massively improved. Least to say, I felt good.

But with these skills arose a new set of problems.

Once I finally felt that I had a place at the studio with this group, I signed up for a different type of dance at another studio. At this point, I had been doing two types of dance — traditional Kuchipudi and Bollywood. Now, I had to learn how to juggle both of them.

I often found myself tied between the two when performance days overlapped or when rehearsals occurred simultaneously. I felt I wasn't dedicated enough to either one to fully be able to commit to it. Even worse, at this point I had started high school, which also meant managing my time with more AP classes. I was simply overwhelmed.

I was overwhelmed with balancing all of these classes, and I was overwhelmed with the pressures of having to be the best one, especially now that I had started teaching as well. When I dance on stage, everyone expects perfection. Especially from a teacher. I mean, who would want to learn from a teacher who can't perform herself? Making even the smallest of mistakes could really damage the overall performance.

So yes, I was extremely stressed. And to be honest, I still am.

As a junior in high school taking multiple AP and honors classes and still teaching and learning dance on a daily basis, I still don't completely know how to manage all this. All I know is that it's completely worth it.

Seeing my students' faces light up when they finally conquer a difficult pose or watching myself in the mirror with my back sweating and feet aching, I know that everything I had worked for up to this point had paid off. Yes, dance can be stressful, but more than that, it's stress-relieving. It truly is my outlet for expression when I'm overwhelmed with anything.

To me, there is nothing that amounts to moving through space, getting lost in the choreography and letting the music flow through you.

Being able to share this dance in front of an audience is simply one of the best feelings in the world. Even better? Seeing your very own students perform on stage and being able to think, "I produced that. I produced those excellent dancers and I am so proud of them." So yes, dancing is a weight on my shoulders, but it is worth its weight in gold.

dance
Report this Content
This article has not been reviewed by Odyssey HQ and solely reflects the ideas and opinions of the creator.
Swoon