The Hidden Treasures Of A Coral Reef

The Hidden Treasures Of A Coral Reef

A mesmerizing hotspot of marine diversity, coral reefs transcend beauty. What is it about these elusive underwater habitats that makes them so unique? More importantly, what can society do to conserve coral reefs? 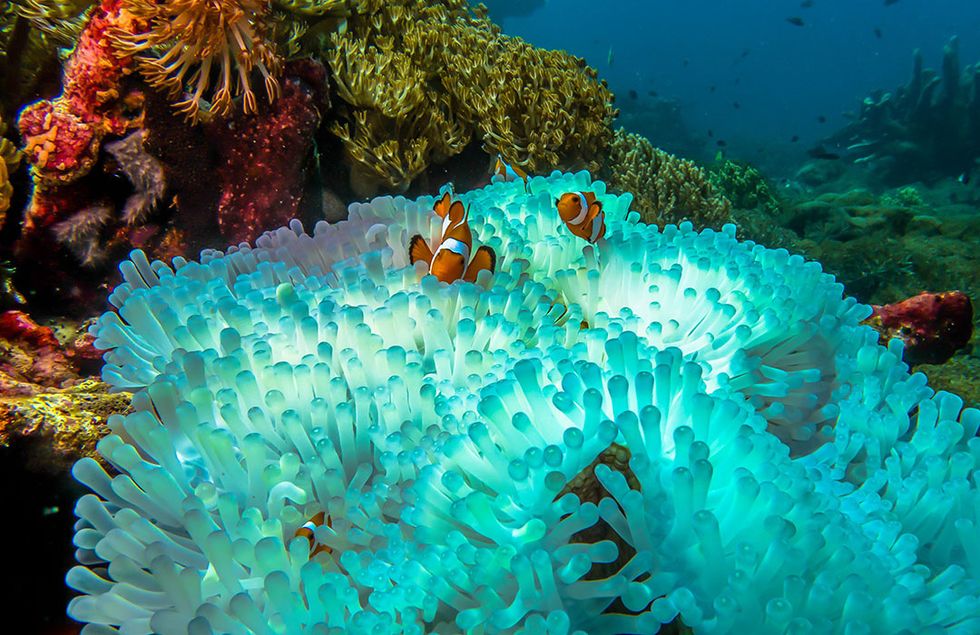 You're about to take the plunge of a lifetime. As you break the crystal clear surface of the Caribbean Sea, you immediately notice the wealth of colors beneath you. As you swim closer and closer, a vibrantly orange, white-striped creature glides by. You are transfixed by its effortless allure. Your eyes follow the Clownfish's movements as it wades towards a bundle of tube-like protrusions flowing in all directions. The Clownfish slips into the Sea Anemone with ease. Out of nowhere, a school of electric blue fish interrupts your concentration as they wiggle past you. The Caribbean Queen Angelfish. These fish prefer the warmer waters of the Western Atlantic Ocean. The Caribbean Sea is the perfect habitat, maintaining just the right temperature. Queen Angelfish diet on sponges, but also enjoy tunicates, algae and plankton. Some even settle for jellyfish. As your eyes survey the reef, they latch onto a colony of spiny, globular shapes, grouped together on the sea floor. Although they appear docile, Sea Urchins are quite active. These animals, belonging to the Echinoderm family, use their transparent "tube feet" to maneuver. Urchins are a favorite prey to predators such as crabs, sea otters, and eels. As a defense mechanism, Sea Urchins use their sharp spines to their advantage, some even being poisonous in select species.

As you stop to appreciate the wealth of diversity that surrounds, you can't help but wonder what support's it all...

The strikingly colorful appearance of corals in a reef is not actually the coral itself; it is the color of an algae, known as Zooxanthellae. This algae provides key nutrients to the coral. In return, the algae is provided protection and an environment to live in.

Unfortunately, with rising ocean temperatures due to global climate change, Zooxanthellae algae become stressed and leave their corals to venture off to a new habitat. Without the mutualistic relationship with the algae, the corals go from their vibrant coloration to a pale, white. As a result, the corals become more susceptible to disease and eventually might die off. This phenomenon is called "coral bleaching". In 2005, from the northern Antilles to the Virgin Islands and Puerto Rico, the Caribbean suffered a massive bleaching event. It lost half of it's reefs in one year (NOAA). One can't help but wonder, is there anything we can do to reverse what is happening to coral reefs? One way to start is by becoming informed on possible harmful actions on our oceans.

Anything from safe boating practices to recycling can make an impact. Of course, the issue of coral reef conservation is larger than a single person's actions. International marine policy will be a major driver in the future of corals. That said, being informed on the very real impacts of global climate change is a significant way to make these essential changes.

Your diving trip is coming to its conclusion. As your head breaks the surface of the Caribbean waters, you smile to yourself, as you reflect on your adventure. The shy gaze of the Clownfish, the sly movements of the Angelfish, the eccentric-looking Urchins. These are all treasures that are worth protecting.