I Went To The Climate March In Washington D.C. And This Is What Happened

I Went To The Climate March In Washington D.C. And This Is What Happened

A protester's thoughts on the power of protest. 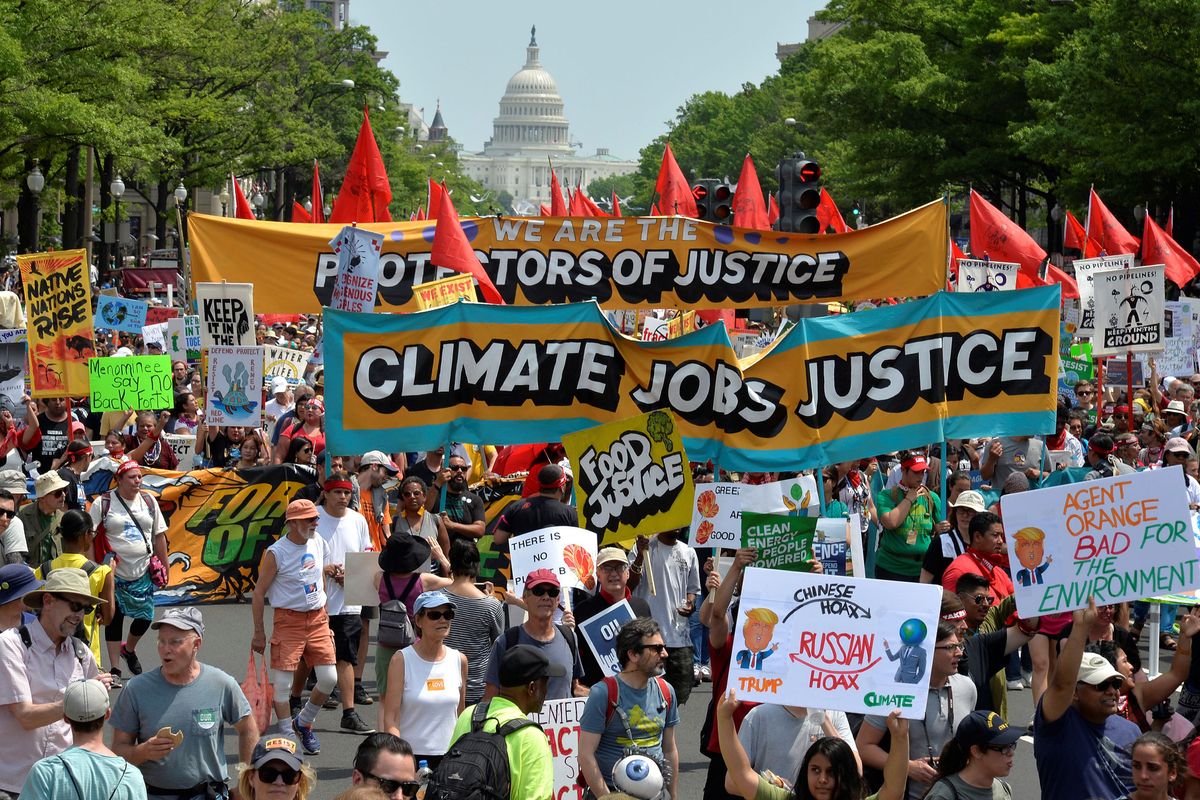 Protesting in Washington D.C. is probably one of the coolest things I've ever done.

Just 30 minutes into Saturday, April 29th, I boarded a bus in Rochester, NY. I, and about 60 other marchers (including my parents), traveled through the (mostly sleepless) night to Washington D.C. By 10am we were in downtown D.C., along with roughly 200,000 other people from across the United States, assembling on The Mall for the Climate March.

I'm not new to protesting, but marching in our Nation's capital is really something else. It was a very cool experience.

Well actually, it was a very hot experience. That Saturday, the temperature peaked at 90 degrees in D.C., making our 45 minute walk with backpacks and signs anything but comfortable. Obviously people have endured much worse to stand up for what they believe in, but the heat was something to contend with. Medics were stationed along the march route, as I'm sure they usually are, but they were busy for this march, dealing with heat exhaustion. It wasn't easy to stay hydrated while we were walking.

On the plus side, though, the extreme April heat tied right in to what we were marching against: the government's ignorance about climate change. It lead to some pretty creative sign slogans.

People drew inspiration for their signs from many different things, though. I saw signs that were puns on Trump's name and signs inspired by the Lorax. My dad carried a hand-made sign featuring a quote from Ghandi. Seeing the diverse and creative signs, especially the funny ones, is always one of my favorite parts of protests.

My other favorite part is, of course, seeing the impact a peaceful assembly can have. At the Black Lives Matter march in Rochester last summer we literally shut down city streets during rush hour. At the Climate March in D.C. the sheer number of people flooding the city could not be ignored. People from all walks of life, no less. I saw a fair number of kids there, and even a couple of people in wheelchairs. Because the fate of the Earth effects all of us.

Most social justice issues effect all of us, though, in one way or another. In my protesting career, I have marched for myself and as an ally. And why do I do it?

Because social justice is a big deal for me (as you can probably tell if you read my articles with any regularity). I've lead a relatively privileged life these short 20 years I've been around. But in that time I have been hurt by ignorance. I have seen the seasonal patterns shift in my own home and I have heard my politicians call climate change a "liberal conspiracy."

I have also been hurt by prejudice. I have been sexually harassed walking home from school, and I have had a guy I used to call my best friend show me how my opinion doesn't matter because I'm a woman.

Worse, people I care deeply about have been hurt by prejudice. They have been assaulted, profiled because of their race, and discriminated against because of who they love. And writing articles for The Odyssey and for my school paper is great and all, but it's only one step up from keyboard warrior.

Of course I'm more comfortable crouched over my laptop doing what I do best. But if we want anything to change, we need to step out of our comfort zone.

It’s easy to think that protests can’t change anything because they take place out in the streets instead, sometimes without any connection to a lawmaker. It’s easy to use this as an excuse not to protest. But the truth is protests do change things.

Our country hasn’t seen the level of protesting that’s occurred since Trump’s election in decades. And now we’re 100 days in to Trump’s presidency and nothing as bad as some of us feared has happened yet. Remember when Trump’s executive order preventing travel into our country from certain Islamic countries was overturned within the week? The massive protests that broke out in airports across the country had something to do with that.

Our representatives are seeing our outrage and they are responding. These protests are forcing our representatives to keep our ill prepared president who doesn’t think before he speaks in check. They’re helping us all get more involved in our government, and they’re making the conversations that need to happen, happen. And these conversations will lead to understanding.

I’ve said it before and I’ll say it again: the only way to fix the current good vs. evil political climate is through understanding. Maybe then the 2020 election won’t be as messed up as the 2016 one was.

So log off Facebook. Close your Tumblr app. Stand up for what you believe in. Let the president know that he can’t just ignore science. Show that you won’t stand behind a man who “grabs her by the pussy.”

You have more influence than you know.