A historic win for a well-deserving city 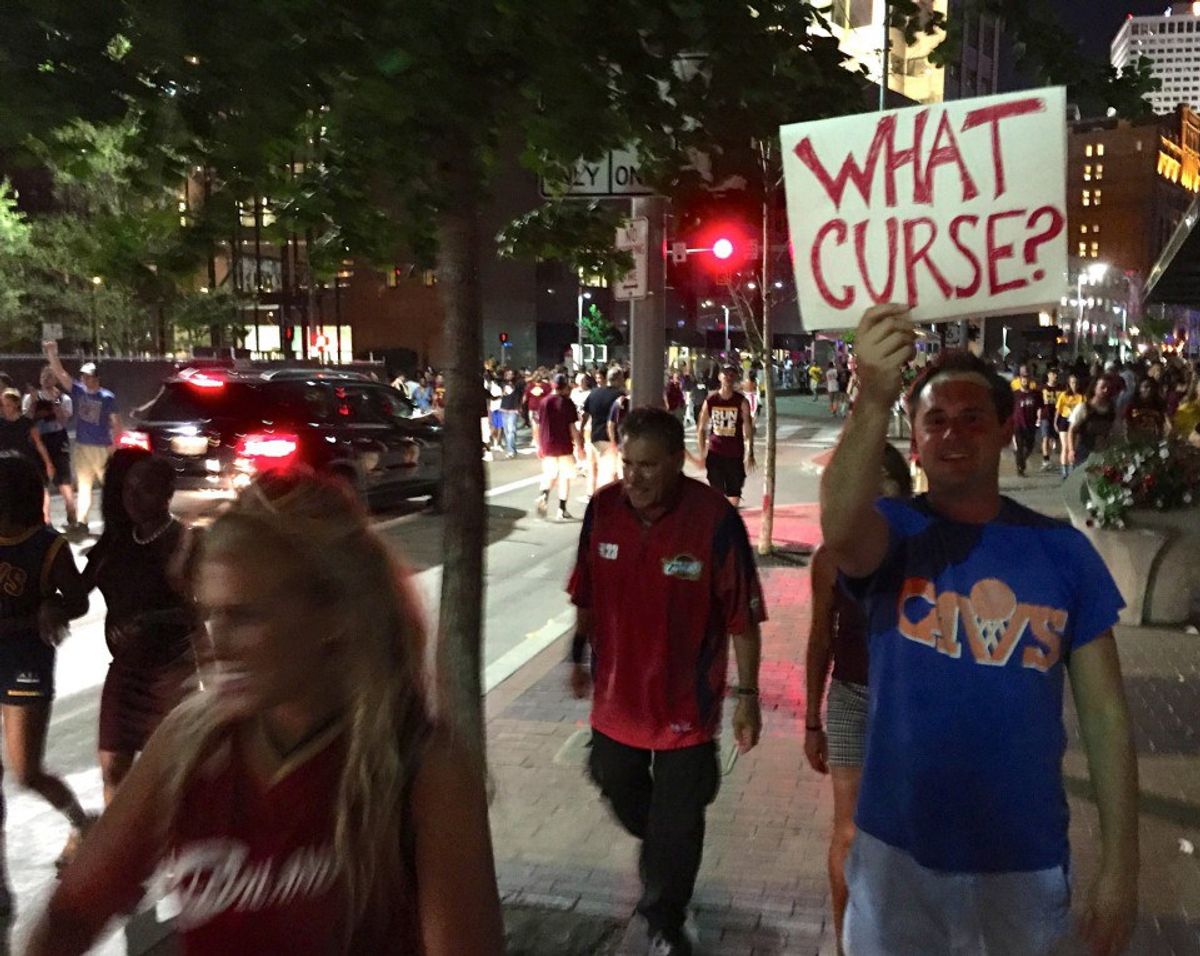 On Sunday night, with my hands desperately clasping my empty glass in a quiet bar in Somerville, Massachusetts, I watched as the Cleveland Cavaliers brought home a long overdue win to their city. Never in my life have I felt such anxiety as I did during that fourth quarter of the 2016 NBA Finals: Kyrie Irving’s step-back 3, Kevin Love’s one-on-one defense, and LeBron James’s fast-break block, a moment that has already been labeled by Cleveland sports fans as “The Block”. It was a nail-biter sure to become one of Cleveland’s greatest stories. With just one minute to go, at 89 points, Cleveland stood tied against the Golden State Warriors, the most prolific scoring team in NBA history and last year’s champs. But they did it. 93-89. Here's a video.

Before I give my younger brother the chance to scoff at my enthusiasm for this win, I will admit that I am not a religious Cleveland sports fan. I go to the occasional Indian’s game, I own a shirt for each of my city’s three major league franchises, but prior to Game 1, I could only name three players on Cleveland’s team (Kyrie, J.R. and obviously LeBron). But for those of you who may not understand, for those who did not grow up in my beloved hometown of Cleveland, Ohio, Game 7 was not just a game; it was an opportunity to silence the nay-sayers and to prove to all our friends from out-of-state that our praise for Cleveland was no BS. This win isn’t just a win for the Cavs, their first championship win in their franchise history and the first team in NBA history to come back from a 3-1 deficit, but a win for Cleveland. I followed these finals not necessarily because I love the sport of basketball but because I love Cleveland. I felt it my duty as a Clevelander to tune in and cheer for my city’s team.

Prior to Sunday night Cleveland had not won a single championship in 52 years. That’s Five-Two. A 52-year drought. We have come heartbreakingly close: the Browns’ AFC Championships in 1986 and again in 1987, the 1997 World Series, and last year’s NBA Finals.

My dad was lucky enough to witness a Cleveland win when the Browns won the NFL Championship in 1964, and my grandpa even luckier to see the Indians in the late 1940s and the early 1950s, and the Browns during the days of Jim Brown. But I, along with every other Clevelander born after 1964, wondered whether or not we would ever see one of our teams bring home a championship title. We have been the butt of countless jokes; once the fifth largest city in the country with half its millionaires, we have suffered from financial decline, population decline, political tomfoolery, a burning river, and loss of national relevancy over the last half-century.


But those jokes stop here. No longer are we The Mistake on the Lake. Forget The Catch, The Drive, The Fumble, and The Shot because we are now The Comeback. Finally, finally, the curse is over. Cleveland is not just having a moment. Cleveland is only going up. We have one of the world’s best hospitals, best art museums, best symphony orchestras, and the Rock ‘n Roll Hall of Fame. Bob Hope, Paul Newman, Tim Conway, John D. Rockefeller, Eleanor Parker, Arsenio Hall, Martin Mull, Halle Berry, Molly Shannon, Jesse Owen, Harrison Dillard, Superman, and Lebron James (just down the road in Akron) were born here. We have beaches and a national park. We are the only city where you can buy a baseball ticket for five bucks the day of a game and not run into any traffic while driving downtown. We have insanely cheap real estate (talking to all of you college graduates), great food, great beer, and now a championship trophy.


Congrats, Cleveland. I wear my Cavs shirt with pride today as I walk down the streets of Boston. I wish I could be there in Public Square to celebrate with the happiest people in the world. Cheers.