How I Became A Baylor DeBakey Scholar
Odyssey

Medical Humanities is truly the coolest major out there. 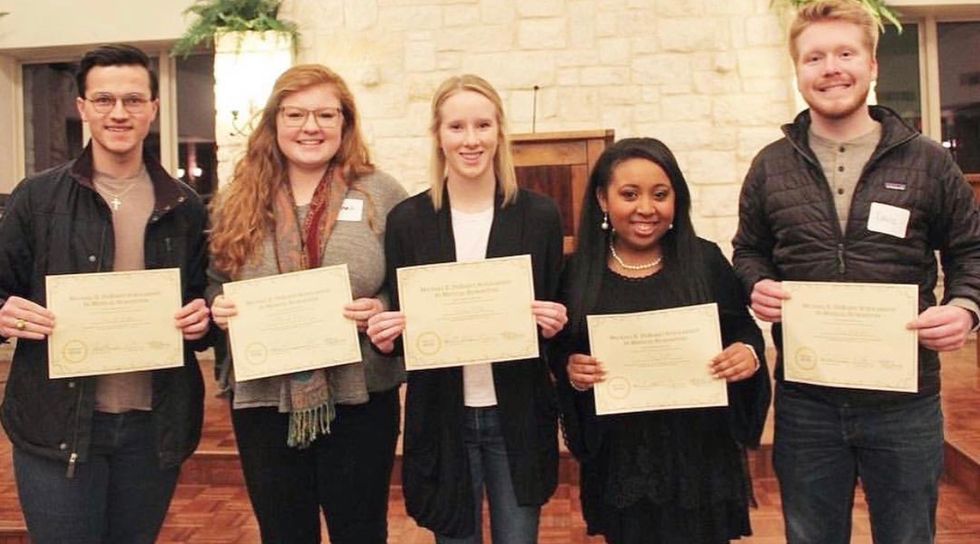 It's really an inexplicable feeling when you reach a goal you've been working towards for three years.

In April 2016, I officially decided to attend Baylor University. I was beyond excited to embark on Baylor's traditions, embrace its Christian values, and join its welcoming atmosphere. I fell in love with this institution because of how it made me feel, and although the competitive academic nature was an important factor, I ultimately decided to move from Louisiana to Waco, Texas because God showed me repeatedly that Baylor was home.

Choosing a major was honestly something I did on a whim on my application a few months prior to my decision. At the beginning of my senior year of high school, I knew I wanted to do something in the medical field. At 17-years-old, I wasn't positive if I wanted to go into healthcare administration, medical law, medical research, or medical journalism. I simply knew that I had a strong interest in healthcare and I had the ability to have a unique and necessary impact on the field of medicine.

When I filled out my application, I had to choose a major. "Medical Humanities" sounded cool, and it didn't have the science restraints or blandness of majors like Biology or Chemistry. I clicked the button next to Medical Humanities in October 2015, quickly got accepted to Baylor in November 2015, and didn't even consider what the major meant until five months later when I realized that Baylor was truly becoming my reality.

So I did my research. I quickly discovered that Baylor's Medical Humanities program was unique and extremely fascinating. I spent hours on the major's website, learning about the interdisciplinary approach to health. Medical Humanities allows its students to learn about disease and illness from a humanities approach rather than a purely scientific view. This rich exposure to the humanities allows individuals to learn about the ethics of the medical field and how health professionals treat patients spiritually and holistically.

I learned that Baylor University was the first institution to offer a Bachelor of Arts in Medical Humanities. As I neared the end of my time in high school, my research seemed as though my declared pre-major was a perfect fit for me. At orientation, I learned more about the program, and I discovered information about the DeBakey Scholarship. This incredible honor is only given to a few high achieving (3.7+ GPA) junior and senior Medical Humanities majors. DeBakey Scholars receive $10,000 to help assist their paths to careers in medicine. The family of the late Dr. Michael DeBakey, a renowned cardiologist who served as chancellor emeritus of Baylor College of Medicine, generously supports the Medical Humanities program at Baylor.

As a 17-year-old incoming freshman, I had not even officially begun my studies at Baylor yet, and I wanted to be a DeBakey scholar.

When I stepped foot on campus in the fall of 2016, all of my hopes and dreams about Baylor quickly became true. I gained an amazing group of friends, joined Baylor's lacrosse team, wrote so many Odyssey articles, and obtained a 4.0 GPA in my prerequisite classes. Everything was perfect, but because I had not yet taken a Medical Humanities class, I was all over the place about whether my major was the right choice for me.

But in the spring of 2017, I took my first class for my major, Introduction to Global Health. I was immediately blown away. Discussing disparities in healthcare around the world and examining illnesses from a cross-cultural perspective was an eye-opening experience. The class was the most challenging course I had taken in my short time in college, but it was also my favorite. The class coaxed me to ask questions I never considered before about equity of healthcare, and after finishing the course, I knew I wanted to make a difference in medicine in order to help make health a right instead of a privilege.

At the end of my freshman year at Baylor, I was certain that the major that I had picked haphazardly in high school was the major I wanted to graduate with. I decided to pursue a track to healthcare administration, and Medical Humanities was the perfect major for my career goals.

Now, with only a year left in my undergraduate studies, I honestly cannot imagine having another major. I am one of the few people I know that has never changed their major a single time in college. In all honesty, I don't believe there is another discipline that would allow me to think as critically and ponder as deeply than my classes in the Medical Humanities department. I have taken classes in anthropology, sociology, religion, public health, philosophy, and other humanities classes with a healthcare focus that have allowed me to see medicine from different perspectives.

I have learned that healthcare is more than learning biology and genomics. it's about having real, human connections and interacting with populations across socioeconomic statuses.

Treating individuals is more than learning about organic chemistry. It's about philosophically analyzing how to deliver the best treatment to meet their physical, emotional, and spiritual needs.

A few of my favorite courses at Baylor have been courses entitled Christian Spirituality and Healthcare, Disability and Society, and Death and Dying, which are classes that I would not have had the opportunity to take with a degree in biology.

The Medical Humanities program has exceeded all of my expectations, and the most exciting aspect of my Baylor career occurred this semester when I had the privilege of being named a DeBakey Scholar. Receiving this incredible honor, which has been a dream of mine since high school, has been the most gratifying feeling since I've entered college. I have worked hard to obtain great grades and build my resume with hopes of one day earning this award, but more importantly, I have truly enjoyed every second of taking Medical Humanities classes. Becoming a DeBakey Scholar has been an immense blessing, and it is even more worthwhile that I have obtained so much applicable knowledge through this major that will positively impact those around me after graduating in 2020.

There's probably a 1% chance that a future Baylor bear is reading this article. There's an even slimmer chance that that future bear is considering the Medical Humanities program because the name sounds fancier than your typical science degrees.

Well, if you're looking for a sign of what to do with your life because you're 17-years-old and confused out of your mind, take these two pieces of advice:

1. Medical Humanities is truly the coolest major out there.

MACY SCOTT IS A DEBAKEY SCHOLAR!!!

Related Articles Around the Web
education
Report this Content
This article has not been reviewed by Odyssey HQ and solely reflects the ideas and opinions of the creator.