A recap of some of my favorite articles of all time 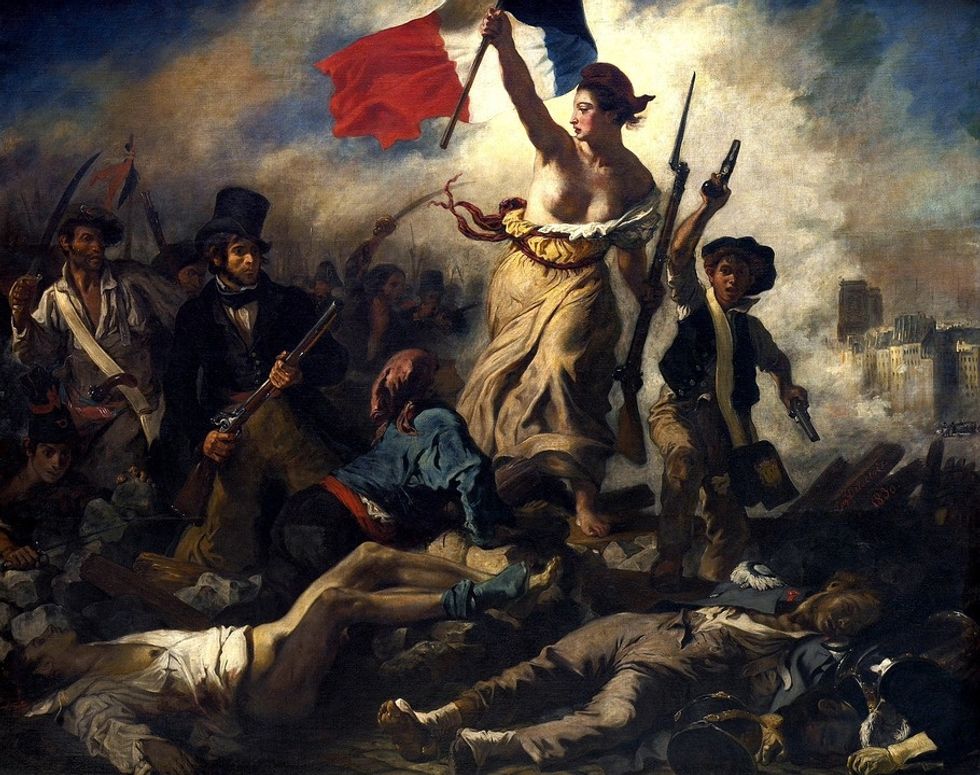 "Upon this mountain top I affirm to you, that whether in victory or defeat I shall forever heed the call of the people" As I playfully unfurl my cape and attach a tri color cockade to my favorite blazer, it is also time to do a nice little synopsis of my favorite Odyssey series of all time- the "Time Travelling Revolutionary." I greatly enjoyed doing this series for you (and perhaps a few more shall appear in the future) and thought it would be timely for me to drop a list of them in hopes of intriguing your curiousity into learning about these events. This series I did both for my personal opinions on the historical events, but also in hopes that you my dear reader will become more curious and your mind yearn for more knowledge of these events. Without further adieu the list of my favorite "revolutionary" pieces

The thing that captures my imagination most of this rebellion is how almost everybody knows it from Les Miserables, but in reality very few people know the details as to why this rebellion started or they confuse it with the French Revolution. Amidst the turmoil of post-revolutionary France, a controversial king took the throne again (after Napoleon and during the restauration) However "constitutional" this monarch may have been, is it worth betraying the republican ideals to?
To find out more about this rebellion- here are two articles I wrote to propell your imagination into this period

as to whether it was a waste

https://www.theodysseyonline.com/no-it-wasnt-waste and about my historical hero Charles Jeanne (the real life Enjolras!)

My biggest lesson from this- there is much more to somebody than what meets the eye. Louis Phillippe appeared democratic but actually was a despotic, Charles Jeanne appeared to be sickly with tuberculosis but stood against the usurper and for the truth, and this rebellion while obscure inspired one of the most beloved novels of all time.

The thing that captured my mind most writing this one was how much misinformation there is on it! Alas, due to the political controversies of the day I quickly learned many of the English sources were tainted by British propaganda of the time (and of course the French sources were polarized depending on who you read!) This revolution is more complex than we give it credit for, and I strongly recommend not dismissing it and learning about the factions.

Here is my French Revolutionary "adventure"

My French Revolution lesson- always read all sides of a story, these events are complex and intriguing but all too often surrounded in legend.

Ahhh this one inspired me to pick up a wonderfully glorious biography on Simon Bolivar! I read about Bolivar (and San Martin) in elementary school, middle school and high school but mainly on a surface level. Writing this piece as though I was in the jungles with Bolivar, and the mountains was enjoyable from a literary perspective but I also learned alot from Bolivar's determination against all odds Sucre's forgiveness to all, and San Martin's ability to do what you know is right regardless of what people say. Each of these admirable figures were very inspiring (although I stuck to Bolivar's Pov)

Here is my Venezuelan article for you all!

My biggest lesson from this- a bit of determination and commitment, and your goals can be accomplished.

Now for the northern half of the American continent, this one is close to my heart. The American Revolution was my first "historical event" of interest due to family history stories of my ancestors who fought in the American Revolution and participated in the Boston Tea Party. I enjoyed the Liberty's Kids cartoons growing up, as well as Felicity the American Girl Doll. This revolution is so familiar to many growing up in the US that oftentimes we forget its complexity and how human all the people involved truly were. I hope you are drinking coffee and not tea to read this one https://www.theodysseyonline.com/the-regulars-are-out

My biggest lesson in this- even the familiar stories have complexity to them, and there is always more angles to learn about it from.

Like the Latin American Revolutions, I learned about this one when I was young but didn't get a chance to dive into it. This one was my first article to get over 900 views! The atrocities committed that led to this revolution were heartbreaking, as is the story that unfolded- interestingly enough Haiti was the first country to formally endorse Simon Bolivar! I had a great conversation with a Haitian woman in French about Toussaint L'Ouverture!

For a very brief overview on this overlooked but important historical event- https://www.theodysseyonline.com/was-the-haitian-revolution-inevitable

My biggest lesson from this- these stories that are often overlooked must be told because they represent people and cultures!

While not the June Rebellion- this is the prequel to the June Rebellion! In order to understand more of the complexities of the drama of French history post-Napoleon and sort of during Les Mis, check it out my dear readers! This rebellion overthrew a tyrannical authoritarian monarch only to install another monarch who claimed to be democratic but whether he was is up for you to decide my dear readers https://www.theodysseyonline.com/the-1830-revolution

Tadeusz Kosciuszko, a Polish engineer involved in the American Revolution, a staunch opponent of slavery, and a loyal friend to liberty also had quite the story of his own! His motto was "for our freedom and yours" and stood up for the rights of all- those he had things in common with, and those who were different. Truly an admirable hero! https://www.theodysseyonline.com/the-1830-revolution

One thing that touched my heart the strongest was the connection through all these different and unique figures- their love of liberty. They all knew about each other and admired each other, while some like Bolivar and Washington didn't live at the same time- Bolivar greatly admired Washington and was deeply touched when given a locket of his. Liberty touches all of us, and all humans around the world have inalienable rights to liberty as well as a desire to be free. Although the times and cultures of each of these articles is different, the spirit of liberty binds them all together in a beautiful tableau of a grand story. All of these characters prevailed against great odds to speak up for their beliefs even when the going got tough. None of them were perfect and they all possessed human flaws, but they also had something great within them and that was a determination to fight for the truth- and this is what sparked my interest to make these stories known in an enjoyable matter for you my dear scholars of the internet.

And there concludes my brief list of my "historical adventure" articles. I hope to write more in the coming months, and it has been a pleasure to "preform" this series for you. Did you learn something new from them? If so please let me know!